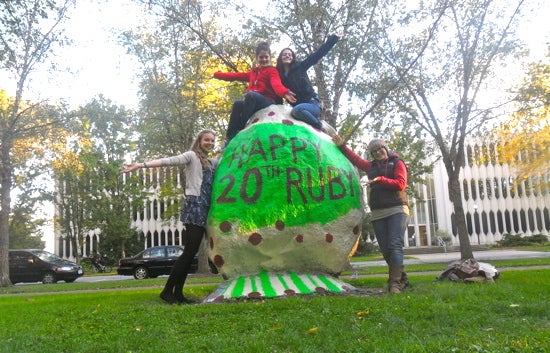 Birthday celebrations begun on the birthday eve, when my INCREDIBLE friends painted a rock on Tappan for me!!! This was just aaaaaa! I screamed really loud. Now I get to see it every day as I cycle to classes (or other less diligent places)! That's the con in the background. Isn't the artistry so refined? The color scheme reminds me of a gorgeous, diseased cupcake. Plus they painted it in the middle of a thunderstorm, which is seriously impressive. The thunder and lightning was zapping all around, and they just kept howling to each other over the wind, 'More paint! Just put on more paint!' Or at least, that's how I imagine it.

So, ever wondered how many poses can you get out of a rock? 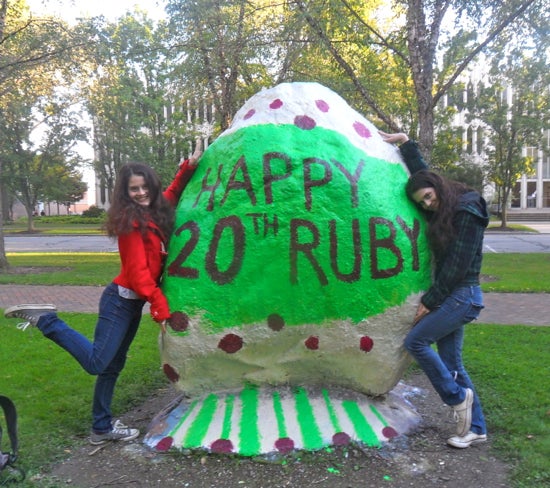 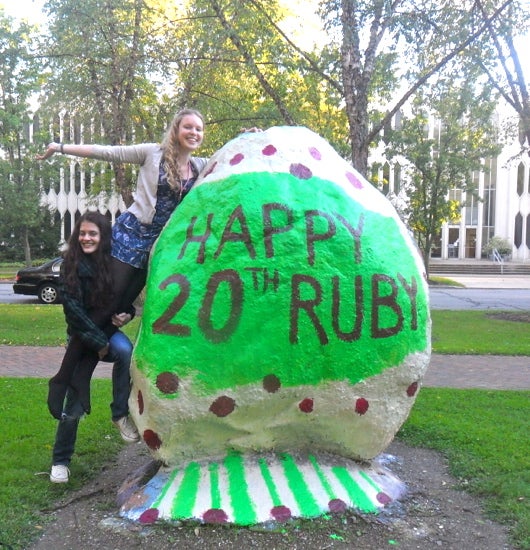 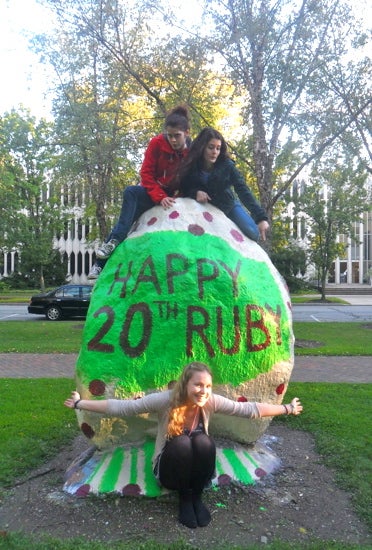 Annie and Jane are such stars!

And this is the one you weren't supposed to see. 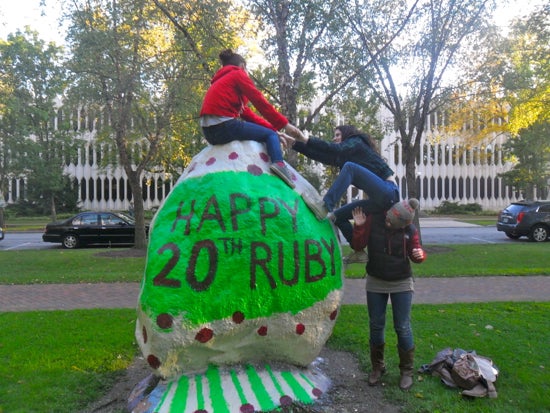 This one was taken as Jane fell on top of me - could pass as modern art, no? 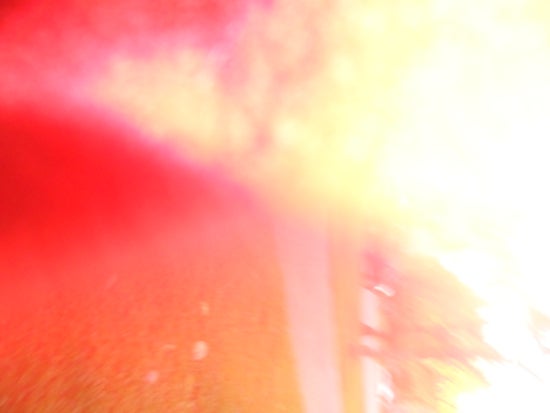 We went to Magpie - pizza place, verdict: yummy crust, but the pineapple chunks are nowhere near big enough. I would like a whole pineapple as compensation, please. And there was definitely much dancing later on that night. We went to sushi the next day ('Mandarin', this great Chinese restaurant with fortune cookies - and apparently they have a secret menu that you only get if you can speak Chinese? And it includes bok choi. My fave edible in the world. I might have to learn Chinese just for that). I am intrigued by the fish tank at the sushi place. The fish, big and small, all cluster together in one corner of the tank - always the same one - and look out at us. It's like they know they might be stabbed at any moment. I get quite emotional even thinking about it. What a life. Ooop and doon, oooop and dooown. Chaucer continues to get everywhere. Here are some pizza crusts and beautiful presents at an excited angle. 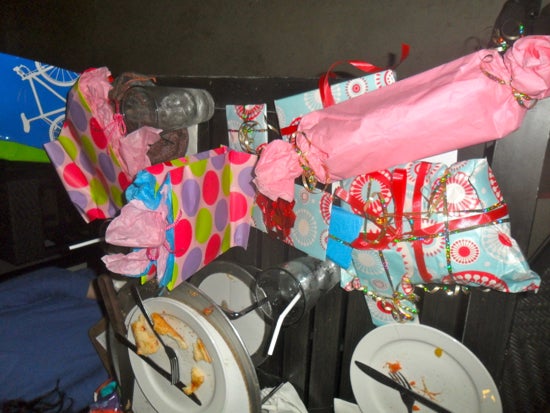 Also, on birthday day (i.e. the day after birthday eve), the amazing Sydney and Deidre made gorgeous cupcakes, with tutti-frutti insides! I didn't get a picture before they were eaten but take my word for it, yum!! Then I found balloons in all my classes with sweets attached! I have no words!! Three weeks later, and the balloon-sweet pile is still sitting in the corner of my room. I haven't the heart to disentangle it. 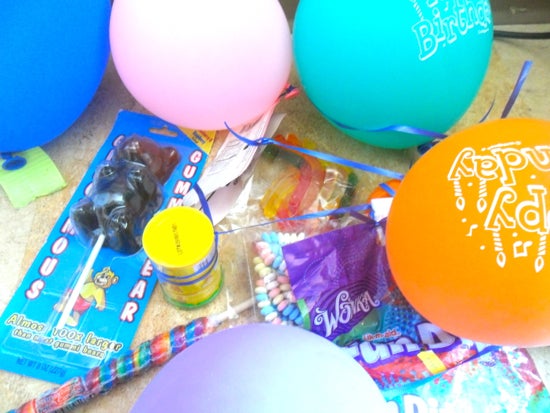 Occasionally I delve in there and get out a candy necklace or have a little nibble of toxic waste. I haven't dared tackle the giant gummy bear yet.

Here's one of my favourite presents: 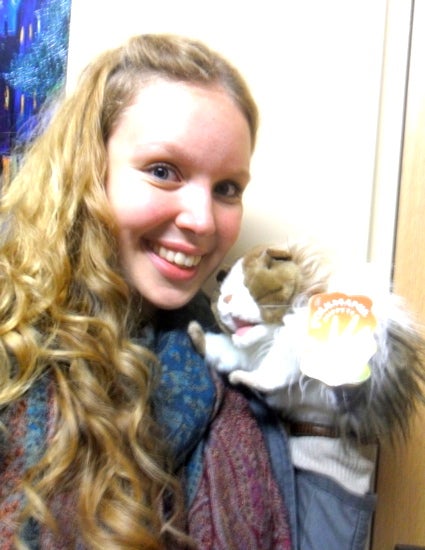 DANDELION! You know I was going on about how I missed my hamster? Well, now there's a solution!! And, he's a puppet, so I can make him chew on hamster food and walk around! I often find myself stroking him for no reason. Of course he's real.

So, I had a brillorama fantabuloso day with my wunderbar friends and I can't believe I'm 20 now! But since I'm no longer a teenager, I guess I don't have to deal with the problem of growing up anymore, so I think my birthday resolution will be from now on to act as immaturely as I possibly can with each passing year. Then I'll be able to introduce myself instead as...2? That sounds much more reasonable. 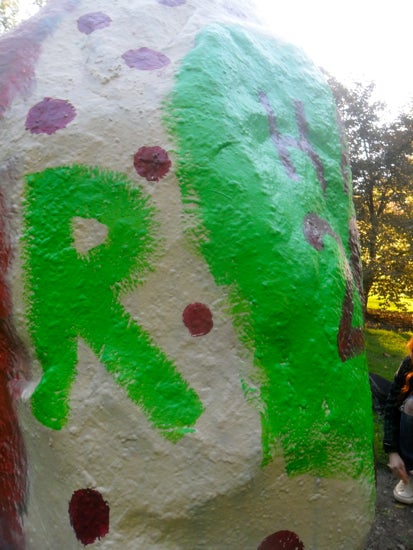 Happy (very belated) birthday! It's awesome that your friends painted one of the rocks for you. I love all of the posing around the rock too, especially the outtake. :)

Thank you Emily! Please make sure to tell me when yours is so I can return the well-wishing! Yeah, I still have no idea how Annie got on to Leah's neck. But there you go!