The past few months have been some of the most difficult of my college career. As the semester came to an end, I began to consider what I was going to do after graduation. My first reaction was to panic. The mere thought of my upcoming graduation makes me so nauseous that I compost my co-op dinner. Not only is Adulthood inherently petrifying, but also I’m going to have to be an Adult in a world that is in chaos. The current president of the United States is classist, racist, anti-Semitic, anti-Islamic, homophobic, transphobic, misogynistic, and ablest. (I’m sure I’m forgetting a few.) Climate change might actually end civilization. And it’s being revealed that more and more men have used their privilege to be the perpetrators of sexual misconduct. Graduation feels like more of a punishment for growing up than an accomplishment.

And then there’s the poster that hangs around campus, taunting me. It says, “Think one person can change the world? So do we.” right above a picture of the whole Earth. 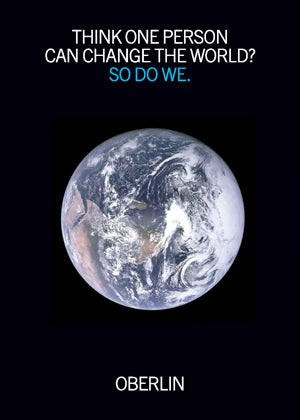 I am unbelievably unqualified to change the entire planet. Although there are social issues I understand and care quite deeply about, there are many more that don't even know exist. Even the issues I understand elude actual solutions and bounce around my head in an enraged, panicked swarm.

Receiving an Oberlin education is a massive gift. Wouldn’t I be a terrible person if I let that gift go to waste? What happens if I don’t live up to that poster? What if I go on to live a perfectly ordinary life with a partner, a few kids, a successful (but not world-renowned) writing career, and an affectionate Newfoundland dog to drool with? Worst of all, what if that’s all I really want?

After Thanksgiving break, I was unable to do a single thing to help anyone. My brain was threatening to explode like the dozens of cans of soda I was consuming. Everyone was helping me instead. There was the librarian who, unknowingly, made a difficult day a whole lot better by waiving my late fee, and the headcook in my co-op who made an extra portion of cooked vegetables for me because I can’t chew salad, and the professor who introduced me to the sensory wonders of Kinetic Sand.

A student in the Language and Thought seminar I took had a sticker on her laptop that said, “Be kinder than necessary.” I spent every Wednesday afternoon staring at that sticker thinking about all the ways I could “be kinder than necessary” and how people were showing unnecessary kindness towards me. If my Oberlin education has taught me anything it is that effective social justice work is based on kindness, empathy, and compassion. As I struggled last semester with issues relating to my trans identity, graduation, and the creative writing department, it was others’ kindness that empowered me to keep going and take care of myself.

I still deeply resent that poster. It feeds into the great man theory of history, which promotes the idea that the biographies of a group of individuals (mostly cisgendered, white, able-bodied, straight men) effectively tell the entirety of human history. The most basic form of this theory is absurd in that it ignores everything from resistance movements to natural disasters to technological advancements. I don’t think any one human being can change the entire planet. Yes, some individuals have a larger impact than others, but no one can single-handedly change the course of human history without dozens of contributing factors influencing the situation.

As graduation looms ahead of me, I have to make sense of what I’m going to do with my Oberlin education. Eventually, I would like to get a Masters of Fine Arts in creative writing and become a professor. I want to make a difference in the lives of other writers, but I don't want to feel obligated to live an extraordinary life. I’ll be perfectly happy if I use my education to become as empathetic as possible, have a positive influence on the communities I inhabit, and to “be kinder than necessary.”