As winter term comes to a close, I am extremely excited to be back at Oberlin, but sad that my wonderful term experience is ending. As I was reflecting on my project (the Oberlin Business Scholars program--a post about it is in the works!), I thought "Wait a second, whatever happened to that blog post I wrote about my winter term last year? Oh no, I forgot to post it! Oops."

So, here's the post that I wrote just about a year ago. Keep in mind that it is Ben from the past talking--I no longer work at Camp Ramah, nor did I just intern at Rachel's Table. Anyway, here's an idea of what a freshman winter term can look like:

"So here's what I've been up to the past six weeks:

First, I went home to Belmont, Massachusetts (a Boston suburb), to the welcoming arms of my family, and more importantly, my dog. Winter break was pretty chill; I had just finished finals and needed to relax and catch up on some sleep. Though I was back in the real world, I still got my Oberlin fill by meeting up with my friends Amy (who conveniently lives in Cambridge, about five minutes from my house) and Connor, who conveniently lives in the slightly further afield Tyngsboro, Massachusetts. 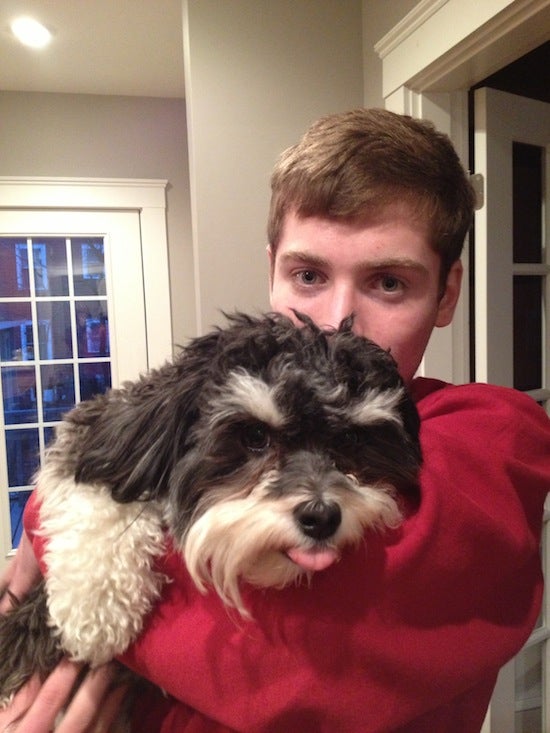 A photo of my reunion with Charley

Towards the end of winter break (and before "winter term" officially began) I went on an all-expense-paid retreat to California through the summer camp I attended from 2006-2010, and worked at last summer--Camp Ramah in New England. The retreat is for a second-year counselors, where we meet and learn from counselors who work at other Ramah camps (there are 8 nationwide). Luckily for me, three of my best friends from my camp came to Oberlin this year as well; and two of them (Mimi and Mel) went on this retreat with me! Out of our camp's delegation of nine counselors, three of us were Obies. It was crazy.

It was nice to see Mel and Mimi in a different environment again. Indeed, the hilly terrain of the Los Angeles area contrasted with the perfectly flat Ohioan one we were used to. We even joked to each other, "Guys, it's been so long since we walked up a hill together!" Anyway, once I got home, winter break ended and winter term really began. 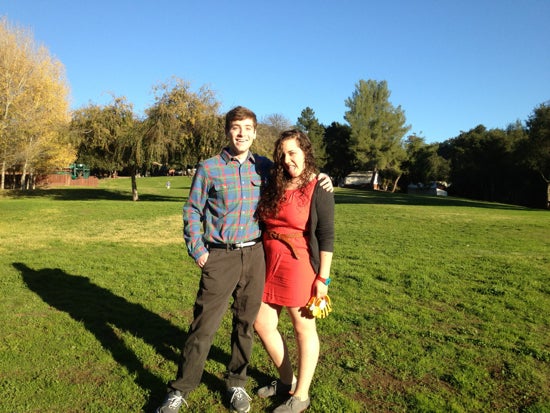 Me and Mimi (Oberlin '16) in California

I spent the bulk of my winter term project working at this organization, "Rachel's Table," a nonprofit that is affiliated with the Jewish Federation of Western Massachusetts. Each week, a few volunteers at Rachel's Table known as "dispatchers" call assorted food vendors, like Panera Bread and Stop and Shop, and ask if they have any extra food that they were planning to throw out. Fortunately for Rachel's Table (but unfortunately for the world, I suppose), there is a lot of this perfectly good day-old food that goes to waste every day. Volunteers called "drivers" then go around and, you guessed it, drive to the agencies, pick up the food, and deliver it to homeless shelters. The organization boasts a catalogue of approximately 250 volunteers, mostly retirees who have worked with the program since its inception in 1982.

The only problem is, one poor volunteer has to call each and every one of the volunteers individually every week so they can sign up for routes! My job was to help change this inefficient process, by selecting and setting up an online application that the volunteers can use to sign up on their own.

For the first few days, after we decided on the final application, I worked inputting all the email addresses of several hundred volunteers, and made phone calls to about 50% of them, whose email addresses we did not have on file. I spent these days delivering a well-rehearsed shpiel about why the seventy-five-year-old seniors I was talking to should give me, an eighteen-year-old college student whom they had never met, their email addresses over the phone.

After all the emails were inputted, and the application was properly formatted for use by the volunteers, I held several training sessions to help the more technologically challenged volunteers (i.e. most of them). It was a very rewarding experience to see the old folks, some of who were initially skeptical of the changes I was making to the original system, finally understand how to use it.

The final week or so, I did some freelance community service. My father is a jazz pianist, and he spends a few hours a week playing with an elderly chorus that sings show tunes and classics from the fifties and sixties. I helped him set up for the chorus a few times, and I even sang with them! The elderly people in the chorus really seemed to appreciate having some younger blood there, and were very interested in my college life. I also spent several hours reviving the song packets for these groups, since they were probably older than I was, and were completely falling apart.

Working with "Rachel's Table" also gave me a greater appreciation for the nonprofit world; I had never fully realized how much work goes into running these organizations, but now I certainly do! Overall, I'd say my first winter term was a really valuable experience, and after talking with many of my friends, it seems like theirs were too."