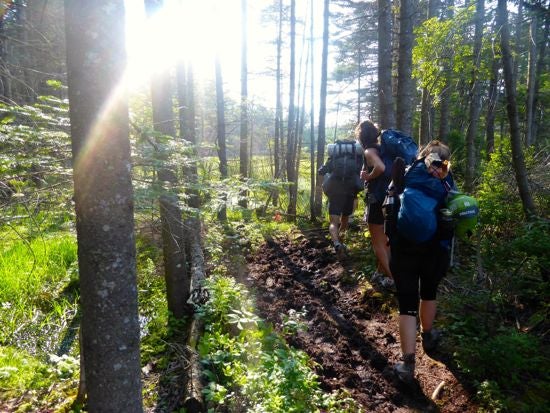 I originally planned to write about my Yoga Teacher Training in this blog post (cat's out of the bag, I did one of those). But after a few unsuccessful drafts, I decided to never do today what you could do tomorrow. Instead here's the story of a decision that I made on the last day of the training.

Hiking. I decided to go hiking during a final meditation.

Like in dreams, the things that come to me during meditations vary from very powerful to completely random. I give different weight to them depending on where they fall on that scale. I usually dispose of the recurring image of a herd of cartoon rhinos playing little tubas. But maybe I should think on that one more. But during this final meditation, I had repeated images of myself taking a long, long walk in the woods, and I decided to put real weight on the idea.

At the end of the last day, one of my teachers stared deeply into my eyes (yoga teachers have a way of doing this, it can be either comforting or eerie) and asked What are you doing now?

This is the kind of question that, at the end of an intense and transforming program, really has the capability to make a participant just curl up and cry. But, fueled by the meditation, I bucked up the courage to give the teacher just as steady a stare. I tried with the stare to say both I am now an intuitive and intense yoga teacher as well and It has been a month and I am determined to win this staring contest.

What I actually said with my mouth was I'm going hiking!

I was seized by grandiose and impulsive excitement, looking forward to my life-changing experience. My first thought was to go to REI, buy myself a backpack, and head for whatever wooded area was closest. My second thought was that I would probably need some things to put in the backpack, and that the closest wooded area was Central Park. I would need a little more planning.

About a week later I set off with six friends and friends-of-friends for a couple of nights in Vermont. I prepared myself for the worst; it was my first time backpacking and everyone warned me that, to the inexperienced, carrying all of your supplies and food on your back while walking up a mountain feels like randonnée, pardon my french. I was determined to prove myself.

Immediately, it proved to be thrillingly challenging. Three feet onto the path, my sneakered feet sank almost ankle deep into thick mud. Hauling them out and looking enviously at the experienced hikers' water-repellent boots, I took a few more steps just to sink in again while simultaneously being slapped across the cheek by an errant branch. I plunged forward, my shoes filling slowly but surely with water.

This was as unlike Central Park as I could have hoped - muddy, uneven, densely wooded.

As the eight of us trekked forwards, the mud only became deeper and the branches more low-hanging. We swam through. As dusk started to fall, we started to worry. Either the path and the woods looked exactly alike, or else we had lost our way. Finally the most experienced hiker called for an about face, saying we would have to retrace our steps to where we had parked and sleep there.

Still optimistic, we turned around and made it back through the mud and the branches before it got completely dark. As we emerged through the spot in the woods we had entered through, our unofficial leader pointed about ten feet to the left, where the actual trail was clearly marked.

After a night in our tents, we headed off through the actual trail, instead of the river bed we had started on the night before. The trail was a few feet wide and clearly marked; uneven, but dry and walkable. This was much more like Central Park, but I was grateful that walking for a few days on this path was something I could actually do.

We spent an excellent two days climbing and talking and swimming and snacking, while I claimed again and again that the walking was light and the backpack wasn't too fast, or something along those lines.

Was it life-changing? I'm not sure. But it was incredibly beautiful. And it certainly whetted my appetite for more.

Another Obie on the trip and I made a solemn pledge to find a way to continue the outdoors adventures back at school, so I'll keep you posted on the best hiking spots around school. I have a long list of goals for my last year at school. They include, but are not limited to, joining the aerials clubs, writing my capstone, and making it to a "breakfast." Now added to the list, thanks to that meditation, is figuring out how the Outings Club works. Word has it that you can borrow camping equipment from them any time, and that they host outdoors trips during fall and spring breaks.

I'll let you know when I find my life-changing experience in the wild jungles of Ohio.