It's mid-December and the grasses of Oberlin College are still a dying, sickly shade of green. I know I won't be saying this come February, but didn't I sign up for tons and tons of snow? On top of that, it's finals week, meaning everyone is now high-strung and legally insane. This combination of major downers probably gives me the right to complain, but I can't. In reality, the last couple weeks have been excellent.

Classes have been ending, and I'm for the most part sad that they're over (save for one intro course that I took, now realizing that I have no interest in the material. Gripe, gripe, gripe). I like having closure, and nothing spells out closure like having a potluck dinner at your First Year Seminar professor's house. I had some leftover bubble tea from earlier on in the semester, and decided to treat my fellow classmates with some sugary Asian liquid goodness. A few of us decided to cook our mystery dishes and concoctions in the Barrows kitchen before heading over to Professor Cruz's house. Professor Cruz tricked us into thinking that her house was a "short 7-minute walk from the Science Center," which translated into a 15-minute walk through a chilling wind. Brr.

The relief of a home-cooked meal and a burning fireplace mercifully greeted our frosted fingers, until I realized that I forgot the bubbles for the bubble tea. In case clarification is needed, what distinguishes bubble tea from extra sugary, extra milky tea is the pearly tapioca balls lurking at the bottom of the cup. These starchy, gummy "frog eyes" as Ms. Cruz affectionately calls them, are not much more than a sticky texture that Asians are curiously fond of. And yet, the rest of the class somehow convinced me to trek back to Barrows and retrieve the bubbles from the kitchen in which they were birthed. Rhetorical question to self: am I that much of a pushover?

After traveling back to Barrows and back to Professor Cruz's house once more (thankfully I had company), dinner was already underway. I had my fill, and began mixing and serving the much-hyped glasses of bubble tea which were quite the success! Following that, a collective survey of Ms. Cruz's house was taken. We pilfered through several bookshelves of interesting material, noting one especially cool book that had a day-by-day collection of 366 satellite images taken over different parts of the world. Adorning her dining room mantel was a vast collection of beautiful teapots, made of cast iron, porcelain, and glass. And inside her kitchen was a cute, vintage, mint-green stove and oven. I repeat: Yolanda Cruz is a badass. 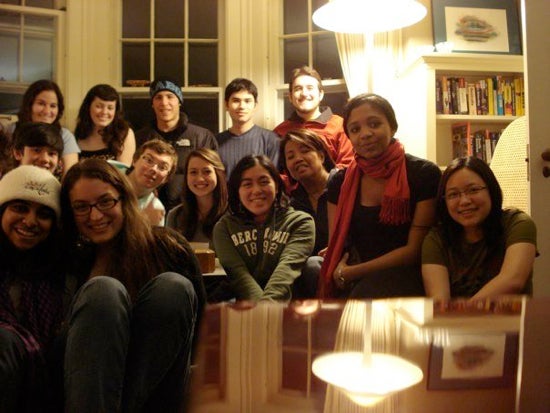 After a sappy end to all of my mostly wonderful classes, the buzz of reading period and finals week began to intensify. Reading period is a standard practice at all colleges that allows for cramming before finals. I'm not sure if this happens everywhere, but it seems as if reading period at Oberlin College means, "You should probably be studying, but instead we're going to schedule every single concert, play, performance, and event on campus in a span of your three reading period days." All these posters and flyers around campus have been advertising their events as "Perfect study breaks." Sadly, I keep thinking, "If I go to all these enticing study breaks, I'm going to need study-break-breaks, meaning actual studying." Sigh.

But really, I did get some serious studying done. I did, however, leave time for some choice "study breaks" to go to:

Sunshine Scouts: Oberlin's acclaimed improv comedy group definitely lived up to the hype after hearing that they placed 1st at a regional tournament. So much gumption!

Yule Ball: Why? Because dancing is the best cure for finals stress. Also because campus band Funkin' Donuts is terrific. Random anecdote: "September" reminds me of line dancing at the annual American Filipino Tennis Association's Christmas party that my dad used to drag me along to. Those were the days...

Art Walk: It is amusing to creepily watch people ogle at your work and realize, "Hey! These license plates say something!"

Taiko Drumming: The ExCo's and Club's performances were equally impressive, and my self-assessed coolness level seemed to drop with every single beat. Running thoughts included, "Why are all these people so much cooler than I am?" and "That girl really mastered the art of drumming, jumping and enthusiastically screaming something in Japanese simultaneously."

Storytelling ExCo: Absolutely lovely! David Fegley's story sent shivers down my spine. And as if anyone doubted this, Aries' blogging and storytelling skills are comparably superb.

The frenzy of finals made the holidays seem to sneak up on me this year. It's a lot harder to appreciate the Christmas lights downtown when it's too cold and windy to sit and you've got centuries of Indian empires and religious movements to comprehend. To lift our spirits and raise our weary heads, a Barrows Holiday Party was thrown on Saturday night. In addition, the wonderful Jordan Bounds organized a "Secret Sheep" gift exchange to conclude on this night (it was more or less the same thing as Secret Santa, yet the name is less religiously exclusive). As an added treat, Barrows RA Ted Waddelow arranged a surprise Obertones performance in the lobby. Can you say best RA ever? I think so. (Might I add that he ran off to get his residents some Chipotlé burritos in the middle of finals week?) 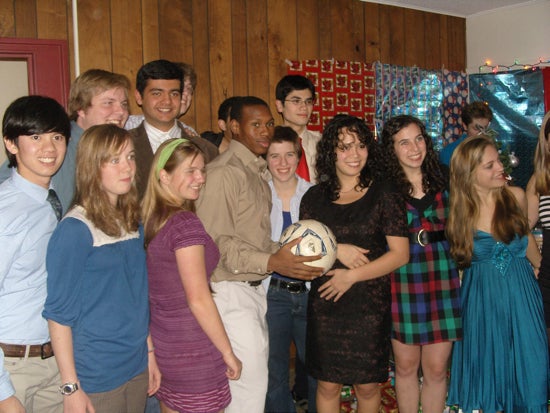 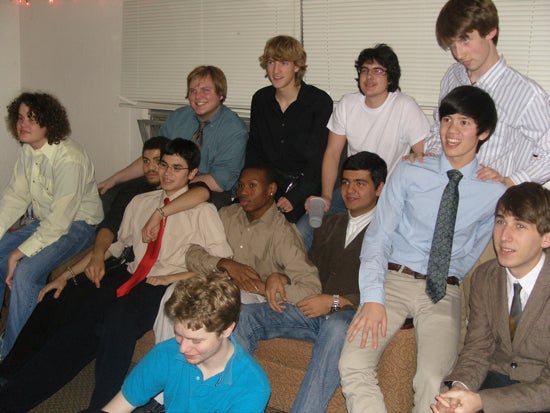 Evidence that David wants me badly. 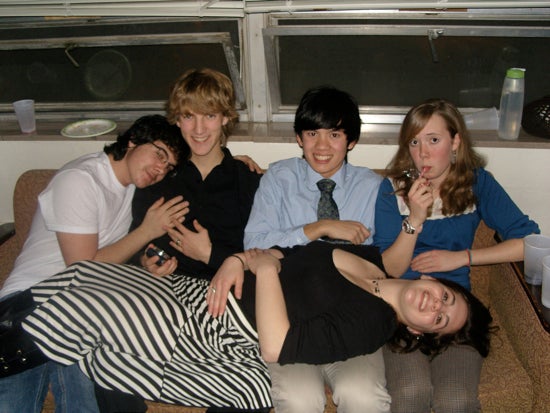 The party contained much picture taking, cookie eating, and sentimental gift exchanges. Thinking critically, it was possibly the cutest thing ever. I'm talking binge hugging and large, toxic amounts of compliments being sprayed. I bought my Secret Sheep Colin a variety of bottled Jarritos, which is a delicious Mexican soda that comes in several exotic flavors, and a kaleidoscope for him to gaze through when... well... Anyways! I happily received a couple of DVDs (Octopussy and Cast Away, both which I have never seen) and a much, much, much, much, much needed set of graphite pencils. Thanks again Lizzie! *big smile*

Somewhere between the "study breaks" and the holiday cheer, I locked myself up in various locations throughout campus. I luckily only had 2 exams to study for, so my finals week was a notch or two less stressful than those kids who had to take Calculus and Physics finals on the same day. I don't want to jinx my final grade, nor do I want to sound like a jerk, but I think my exams were fine. Of course, I won't really know until later. After excruciating studying and emergency Ramen breaks, I survived my first semester of college!

And now? Well, I'm currently sitting in an uncomfortable plastic chair at home (referring to New Milford, NJ home). My little sister switched my super comfy swiveling chair for this inferior, baby blue evil twin. Something feels weird, and I'm not complaining solely about the fact that this chair hurts my butt. As obvious as this statement will sound, I am not at Oberlin. The differences between here and Oberlin become more obvious when I see a Dunkin' Donuts in every town and tune my inner radio to a Funkin' Donuts cover of "Play That Funky Music." It's not that I hate being in New Jersey, because that's not true. My feelings can be more accurately described as a desire to blend these two separate worlds that I'm forced to seesaw back and forth, to-and-fro. After a semester at Oberlin, I can safely say that I love my school a bit too much.

Okay, enough of that. Too much sentimentality for one post. In other news, Christmas is coming! My one neighbor who always buys a dozen of those huge, Christmas-related blow-up dolls doesn't have them up this year. Then again, I guess that's a good thing. Perhaps that fad is over now. Now it's time to go catch up on a week's worth of sleep.

Happy holidays to everyone!

Congrats on completing your first semester!

Also, Yolanda Cruz is awesome. She taught lab for my intro Bio class and she was amazing. Dinner at her house was fabulous, too; it's great that she did it for your seminar class, too!

Alas, there is photographic evidence of my undeniable Karl-love! So it is.

By the way, I loved the "binge hugging" description. Everyone was a little buzzed on love that evening. And we even got a surprise visit from Oberlin's favorite all-male a capella singing group, The Obertones! Ted, our RA, sneakily organized an impromptu concert in the Barrows first floor lounge: We had music, we had rhythm, who could have asked for anything more?

Have a nice break, Mr. Orozco!

Hey, I just came across this! Thanks for repping the Sunshine Scouts -- we appreciate it!