If you are anything like me, you overthink FAR in advance. For example, I am already panicking to my Mom about what I should do after college, to which she said: “It’s only November, girlfriend.”

But one of the *cough* better ways I prepared for college was relying on my faithful supply of college movies. In one of the first weeks, Oberlin hosted a bike-in movie of Monsters University and bingo on Wilder Bowl (one of the main quads). We all stretched out with picnic blankets and candy, and my roommate and I won a free picnic blanket. As I watched, I couldn’t help but compare Monsters University to Oberlin College. While the Regular Decision deadline for Monsters University has already passed, I hope this article will make you consider applying to Oberlin. We don’t have a Scaring major, but we do have a Physics major, which in my opinion is just as scary.

I will be rating scenes on a scale of 1-10 based on how similar they are to MU.

Silence in the Library

In one of the tasks of the Scare Games, Oozma Kappa and Mike must be as silent as they can to get through the task. If the Librarian hears even a peep, they are dragged screaming through the ceiling and cast outside the library.

OUR cephalopod monster librarian quit a few years ago, so you don’t have to be worried about being quiet. At Oberlin, we have four libraries (and a few secret ones), and students contest which is the best. They’re all wrong; Mudd is the best.

Mudd has four levels: the first has Azzie’s, our lovely cafe on campus, dozens of PCs, a copier, printer, etc.; the second and third both have more amazing study spaces; the fourth has a sundeck and our special collections. Mudd is, as one visiting influencer put it, a “mid-century design treasure grove.”

Anyways, the third floor is the “High Quiet” floor, which restricts group conversations and loud noises. Cue: my friends and I run inside on the third week, sink into the womb chairs, and promptly discover how spinny one of them was. Listen, you can’t blame us. If you sat in a spinny womb chair, you’d want to spin until you got nauseous too, right? It was all fun and games until we knocked the womb chair against the heater. If you were on the third floor at this time, I deeply apologize. We were (are) freshmen and will never, ever make that mistake again.

Really, the fact that I’m still alive shows that we have the coolest libraries and librarians. 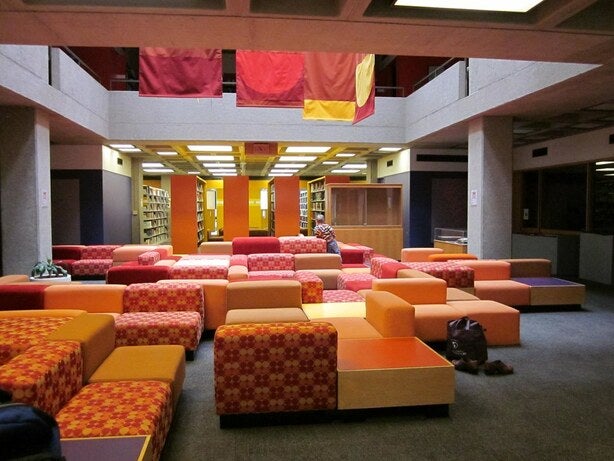 Ah, yes, the first morning. You wake up and realize that you’re not at home anymore and there is a complete stranger sleeping in the bed next to you.

For me, it wasn’t like that. Not because I knew my roommate before I came to Oberlin or anything. No, on August 29, I woke up and saw a girl that would become my best friend sleeping next to me. The previous night, we’d fallen into bed and she’d hovered over her phone. Taylor Swift was either making an announcement or releasing a new album, and Julia needed to know which. Not only that, but she needed ME to know which. Twenty minutes after I fell asleep, Julia was proud to wake me and announce “only two minutes left” with a continuing countdown.

Ah, yes, the Scare Games. It’s a competition in which students fight to be the scariest in their team. We do not have Scare Games, unfortunately, but we do have Solarity. Did you like the large crowds and colorful lighting? Wish there was some boss music to accompany that? Oberlin’s Solarity is the largest student-run concert on campus and has featured artists like Lizzo, Kota the Friend, and even Kendrick Lamar! I cannot wait to attend this year.

We don’t have Greek life on campus. Instead, we have co-ops or cooperatives. Charlize explains it beautifully here, but I can sum it up as a group of students who live / work / eat / cook together and are a separate entity from the college. We have a pottery co-op, a film co-op, a bike co-op, a book co-op, dining, and living co-ops, you name it! They act as a tight-knit community that throws events together like art markets, workshops, and even dances. In my opinion, co-ops are better than Greek life because I’m pretty sure they won’t haze you. Also, can you make an epic chalice out of clay in a frat house? Didn’t think so.

I’ve been wondering who could win in a fight between Dean Hardscrabble and President Ambar. After lots of thought, I can confidently say that I have no idea. They both possess the qualities of a greater leader: motivating, honest, and caring. I’ll dock a point because President Ambar doesn’t have wings and spikes, but they’re pretty similar in might.

I know that thinking about college can be terrifying. For me, watching college movies helped. If Monsters University teaches you anything, it's that college is scary and weird and unpredictable. It's also fun and amazing and where you'll meet your best friends.

If it helps at all, I promise you that none of your fraternity – or co-op – brothers will ever start dating your mother here at Oberlin. At least, I hope not. 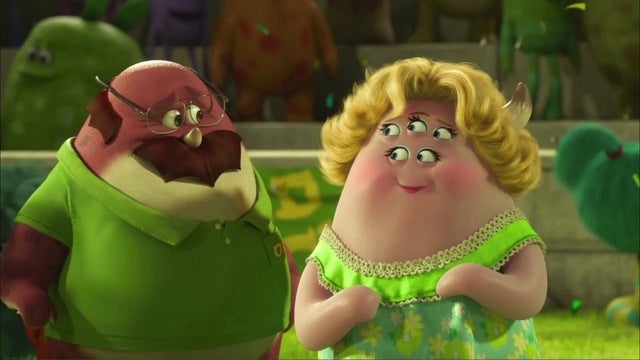