Our hero is at the library, talking shop with her lovely associate. A male, maybe-20, in a fitted black tee and cargo pants runs up to her. His grin takes up most of his face.

"Aries, guess what?"
"Mmm?"
"I didn't get into Senate!"
"Why do you look happy?"
"I don't have enough time to solve every problem in the world!"

Students at Oberlin have a lot of power. Administrators try (as best they can) to work with students, but when students see an issue, they grapple. From housing assignments, to cafeteria hours, to which professors get tenure, students shape their school.

Given the overall atmosphere of student activism, some question the Senate's utility. But if you were associated with Ben Klebanoff, unofficial Don of Oberlin, the power of Senate became clear.

I first met Klebanoff in Dawson's American Government 105, the best class in ever, barring Dawson 209: Return of Dawson (which I never took but heard endless stories of its grandeur) or Dawson 300: The Final Reckoning.

At first, I deeply disliked Ben. He was a know-it-all. But once I realized that he did, in fact, know it all, my feelings changed to those of overwhelming respect.

He didn't look like an intellectual demon. He was on the ultimate frisbee team (the Flying Horsecows), cut his hair short, and wore nondescript tee-shirts. He was a gentleman. He asked girls on proper dates and actually went to the barber to get haircuts, rather than using a pair of orange construction scissors over the bathroom sink*. My grandmother would have pronounced him a "very nice boy." 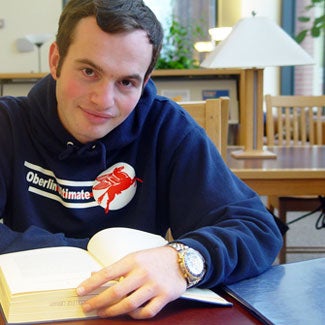 
But if he wanted something done, it would get done. He fixed things, big and little, from the Student Finance Committee, to transportation to and from Oberlin. He knew everything.

Sample Conversation with Ben:
"Ben, are you using your powers for evil?"
"Not now. Not yet."

Talking with Klebanoff about Oberlin was like talking to Ahab about whales. He understood systems, people and how Oberlin works. While being a Senator did not give him the superpowers, it gave him a costume and a tool belt. Student Senators sit on the important committees (that are normally closed to students) to represent the student viewpoint.

I don't think we were friends, though I'd have liked to be. Ben was too smart to be friends with me. Conversations with Ben felt like I was racing a horse against a Bentley. It would be like meeting Rahm Emanuel or Josh Lyman as an undergrad. You knew who he was going to be, even late at night in the library, when you both smelled like desperate DeCafe coffee.

[image no longer available]
There is a parallel here.

And other people knew it too. He was Ben Klebanoff. People formed opinions on him before they met him. Somehow, he remembered everyone's name.

With Ben, and other senators, gone for bigger, better things, we've got new senators:

And the infamous write-in candidates, as students can write in who they think is worthy for Senate. Some highlights include: 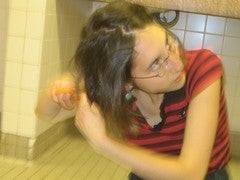 Me, cutting my hair with orange scissors in Dascomb. Don't judge, dudes.

ii.
Dawson really is the Best Teacher Ever. If you are a fuzzy-headed liberal, you really need to take his class because he will go Hartman on you until you become a stronger, better, more effective person.

Paul Dawson quotes from Oberwiki:
"Use the Oberlin motivator: guilt."

"If we had duct tape, we'd help Klebanoff know what's good for him."

"I want to serve the public, and serve some more."

"Her tumors are about to pop out like toads on a Texas highway."

"Altruism can be so very selfish."

ARGH WHY CAN'T I SEE THE HEART I POSTED? I DON'T UNDERSTAND? ARIES, BEN, help?

Just read his syllabus for the Political Leadership class and that is the best syllabus I've ever read since David Foster Wallace's (http://www.google.com/search?q=david+foster+wallace+pomona+syllabus&ie=utf-8&oe=utf-8&aq=t&rls=org.mozilla:en-US:official&client=firefox-a).

"Most importantly, this seminar probably will require you to transform radically
your writing. Anyone who persists in habitually bad writing will fail."

I want to take this class now.

@Kate:
Dawson is the man. My super-boyfriend-partner-why-are-you-in-texas-lame took Dawson 209 and applied the class to our entire relationship.

Which was both good and bad. It made conflict resolution great, but some part of me loves the part of relationships where you just scream at each other. Screaming, like poor language use, is not very Dawson.

You need to take the class.

He really does change your life.

I can't really respond to your post, because right now, I'm not really done making loud, inhuman laugh-noises at it. At one point, I started to pull myself together enough to try and write a proper reply, but then I saw that a friend had sent me this:

Just putting it out there...that was one of our senators last semester.

Kate- TAKE HIS CLASS. HE WILL TEACH YOU THINGS. -ahem-

Aries- I hope one day, someone writes a multi-volume biography (with photographs) of everything you've ever done, drawing inferences about the nature of power and politics, and revealing all your close-kept secrets and family history for all the world to see...

That is the only acceptable way for you to pay for that awful title. And for calling Ben "Klebby"...

Are you making the squeal-noises where you just hiccup for a while? Those are cool.

A personal history? All my evil secrets and loving family stories? They'd just have to steal my computer and take the Storytelling Exco. My privacy would be over.

(You know that Ben Klebanoff is John Lyman. This is truth)

Hey, don't forget Dawson's first year seminar, which I guess would be Dawson FYSP: The Prequel?
Also, it's true, he will change your life. Probably for the better, unless he goes back to taping matches to exams that are particularly bad. (I hear he gave that up when he made his own daughter cry!)

I'd bet it was "The First Dawson: Director's Cut."

I though the match thing was a rumor... Though in retrospect, his style of grading, for papers and in-class thoughts, taught me how to sound more like a rational adult and less like a hapless child.

You have a lovely writing style Aries.