During my quiet times on the road during travel season, I am usually:

a) eating pie by myself

b) eating pie with a friend 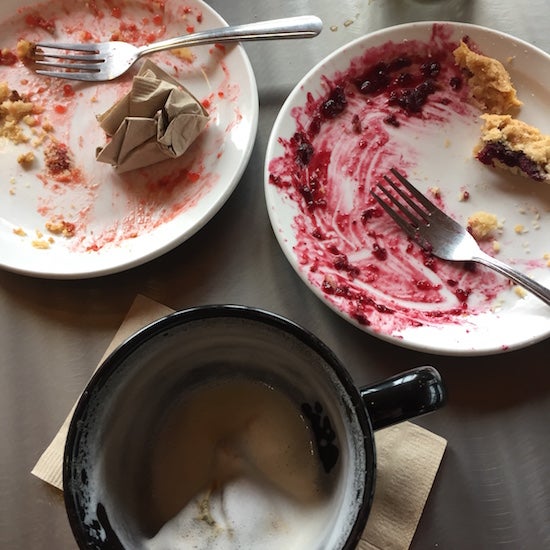 Remains of Strawberry Rhubard & Blackberry Pies (and tea) in Eugene, OR 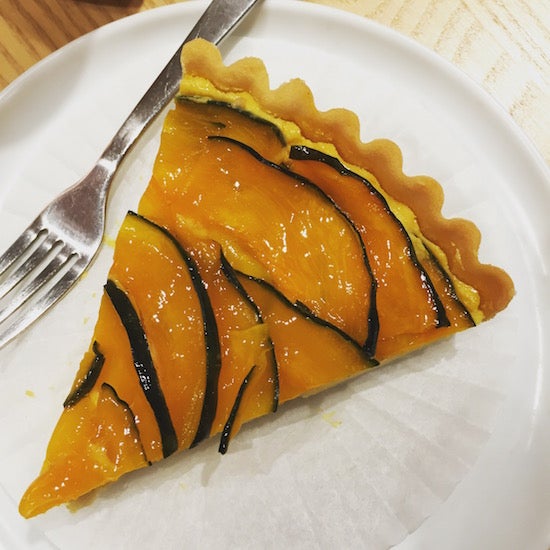 d) looking up where to eat my next slice of pie

This year, I decided to dive into the work of an author I've been hearing about for ages but had thus far skirted around. First, I read Attachments (the premise looked funny). I'm not sure why I didn't read Eleanor & Park, since that's the recommendation that had gotten me started on the Rainbow Rowell train in the first place, but somehow or another I got sucked into the humor of Attachments and let myself linger there over copious mugs of Earl Grey.

Then I read Fangirl.

And I realized I was in trouble.*

This book is a gem. I've been hearing about how Rainbow Rowell is known for really getting the characters she writes, through action and atmosphere and, perhaps most importantly, dialogue. But I don't think I was quite prepared for the way I tumbled headfirst into supreme and instant adoration with the cast of Fangirl.

Perhaps it's because Fangirl is about college and college is what I do. I mean, it's what I talk about. And think about. And while I don't live it anymore (sometimes, especially when one of our brilliant bloggers writes about their classes, I really think that's a giant pity), it is what I spend most of my day dealing with.

It gets what I remember about college. What I loved about it. What I was intimidated by, managed to survive, and turned into triumph. It gets the intensity and the focus. The drive. It probably gets a ton of things wrong, too, but I couldn't tell you what.

College is tricky. It's a totally new landscape, no matter where you go. Cath, Rowell's heroine, is freaked out about navigating all the newness by herself:

In new situations, all the trickiest rules are the ones nobody bothers to explain to you. (And the ones you can't google.)

And isn't that the point? College isn't about easing your way through four years of study and emerging on the other end, exactly as you were four years before. It's about learning to engage, and to be uncomfortable, and to accept challenges. Some of them are way harder than others, and you learn to know when you need help and how to ask for it. Sometimes what you learn is that the lesson you're just starting to grasp is one you'll be wrestling with for a long time yet.

And you get to concentrate, uninhibitedly, on the things that matter to you, even though you maybe only recently discovered how much they matter. Translating the poems of a German-Jewish exile who wrote about imprisonment and optimism. The growth of the Rwandan economy in the wake of genocide. Racial stratification in the urban education system. How light scatters off aerosols. Or, as Rowell puts it:

College can also be a time of anxiety and worry. Your safety net is miles and hours away; when I went to college, my safety net seemed astronomically distant, not just by plane but also in terms of time zones — I know I woke my parents up more than a few times because I forgot to calculate that time difference. Learning to do laundry, knowing that the washing machine is needed by a dorm-full of other students; navigating the dining hall(s), and becoming equally comfortable with eating alone and making new friends over lunch; learning how to make microwave rice krispie treats (don't knock 'em); discovering how best to approach a professor during their office hours, to not only discuss a difficult paper but also to find a new mentor; figuring out how to make use of the campus health center... Those were skills I didn't know I'd need to develop, until they became necessary.

And then there was the workload. My first semester in college, I was so intimidated by the massive humanities library that I didn't use the top floors unless I was meeting someone up there. Except that's where most of the books I needed happened to live. I became an aficionado of JSTOR and the other online databases, just so I could avoid the library's hushed top floors that, to me, seemed to house only upperclassmen working diligently on theses and important (read: upper level and, therefore, far more important than my own intro level) assignments. It was a form of impostor syndrome, something many college students (and not only college students) wrestle with and against.

Walking to class, Cath couldn't shake the feeling that she was pretending to be a college student in a coming-of-age movie. The setting was perfect — rolling green lawns, brick buildings, kids everywhere with backpacks. Cath shifted her bag uncomfortably on her back. Look at me — I'm a stock photo of a college student.

My first semester ended and though I hadn't achieved the grades I'd been used to in high school, I had made it through an entire semester. That felt like a huge achievement, especially considering that 9/11 happened in my second week of college. During the semester, I'd attended a peace rally and numerous vigils, been invited onto the editorial board of a literary magazine, joined a few student clubs, and written a few papers that I'd actually liked. When I returned home for Winter Break, it felt as though I'd been gone for so much longer than five months.

Months are different in college, especially freshman year. Too much happens. Every freshman month equals six regular months — they're like dog months.

What I like so much about Fangirl (beyond the sheer audacity of a book about a girl who writes slash fiction!) is that it doesn't sugarcoat the college experience. There are a lot of things about college that are difficult, because growing up is not an easy process. It's not easy failing in a class you thought you would excel in. It's not easy picking courses out of a course catalogue, when you want to take them all (or, inexplicably, one semester they seem a little more drab than the semesters prior). It's not easy making new friends in a new environment, and yet you will excel. You will find your way.

Cath's college experience isn't all cold Nebraskan winters and worry over her fiction assignments. There are the lovely moments of making new friends (whether she wants to or not), the discovery of a writing partner with whom she can let loose her fantastic imagination, the night she stays up reading The Outsiders to her roommate's friend.

There are all these lovely charming snippets, and it's between all the dialogue and action that Rowell builds her college prism. It's as though, once she got rolling, she couldn't stop writing about the things that make college cohere.

One of the things that made college doable was a reminder from my faculty advisor to take time to be quiet. For me, that meant reading fiction — and now that I think about it, it's also what helped me get through the twin pains of my IB Extended Essay and college applications. It's important to take time for yourself, in whatever way makes the most sense for you. If it's a book you're looking for, to slip yourself into and escape a while from the busy world around you, Fangirl will give you that space.

When I say I found myself in trouble, I meant that I knew this Rowell kick wasn't going to end anytime soon. I make it a point not to buy books on the road — I'll just have to cart them home at the end of the trip, and my luggage never has room, especially for hardbacks. But not only did I buy Fangirl before I even got through Chapter 6, I also collected Carry On — it's the resolution to the Simon Snow book series that drives much of the plot of Fangirl.

So that was two tomes to haul back with me at the end of that trip. Since returning, I've been recommending Fangirl to everyone** I speak to — basically I don't want to end the experience of Fangirl. It's a feeling I remember all too well from college: at the start of my last semester of senior year, I couldn't wait to get out... And the moment I realized that graduation was really, really happening, I couldn't stop myself from wanting to stay.

*I'm still in trouble, weeks later, because I just found out you can buy a Fangirl postcard set on Rowell's webpage. HELP.

**While I was drafting this post, intern Shannon burst into my office to say "This book — what have you done to me?" and then proceeded to finish reading it in one day.

I'm also a Rainbow Rowell fan Eleabor and Park was my gateway book and I still love it. I listened to it and have both Fangirl and Carry On to listen to. I read and loved Attachments but am now wondering what it would be like to listen to too ...

Hi Eve! Considering how long my drives across Texas are, I really should get into audiobooks. Thanks for the recommendation!

I started to comment on this post on Friday and now it's Monday. Between then and now, I've read half of Attachments. (And three weeks ago I read Eleanor + Park and BAWLED.) So what I'm trying to say is Fangirl is now definitely on the list next!

Also A++ for the inclusion of a My Cousin Vinny gif. Marisa Tomei is everything!