I don't know Stephen Rubin. I just heard about him last summer as college leaders began finalizing the artistic and musical program for the year known as the Oberlin Arts Guide. Rubin is the namesake for the newest offering at the Conservatory of Music, the Rubin Institute for Music Criticism.

Rubin, the president and publisher of Henry Holt & Co, is a former music journalist. He covered the classical music scene and wrote profiles on the likes of Arthur Fiedler, Pierre Boulez, Isaac Stern, and Birgit Nilsson, among others. What I am most fascinated about is how and/or why he chose the conservatory as the place to see his concept come to life.

According to a Plain Dealer article I read, Rubin stated that his goal was to "... lay a new foundation, to more fully equip a few members of the next generation to write about classical music, if and when they decide to take up the pen. Unaffiliated with Oberlin, he was directed to the conservatory by an alumnus."

On ClevelandClassical.com he explains his concern how over time newspapers and magazines have decreased or eliminated their coverage of classical music. As a result he believed fewer talented people were entering the field of classical music criticism. He wanted to change the situation.

I could easily see an alumnus or alumna putting forth the resources in part because of the affiliation. But to decide to underwrite a program based on someone else's recommendation? Having a musical background, I suspect he's well aware of the conservatory's reputation and thereby gave the school his commitment and the flexibility to develop and design it as appropriate.

Conservatory leaders were thrilled to be able to create a program with Rubin's goals in mind, as they also complement the conservatory's mission of preparing students to play and write about music at a high level.

The four-day session just ended. The institute featured four public concerts that allowed concert attendees and the 10 Rubin fellows, who are students of Oberlin's College of Arts and Sciences or Conservatory of Music, the opportunity to critique the performances of noted professional musicians and win cash prizes. The institute paired the aspiring music reviewers with seasoned music critics. The students also took a specially designed Introduction to Music Criticism course and participated in workshops and other activities to prepare them for this quasi-writing competition.

One of the student fellows, talented organist Jacob Street '12 is $10,000 richer, as he won the Rubin Prize for Music Criticism. He is pursing a Master of Music in historical performance. Another fellow, piano performance major Megan Emberton '12, earned an honorable mention and $2,500. Concertgoers who submitted a review had an opportunity to win the Public Review Prize worth $1,000 and an honorable mention citation worth $250. 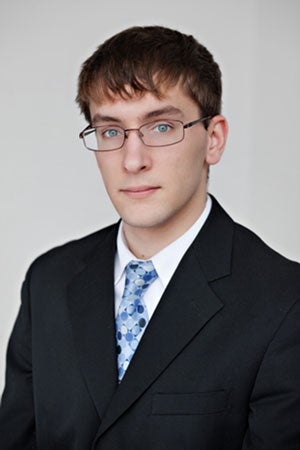 Each of the performers these novice critics reviewed are among the best in their respective fields of music: the Cleveland Orchestra, Apollo's Fire baroque orchestra, pianist Jeremy Denk '90, and the International Contemporary Ensemble, an eclectic group of 33 instrumentalists who specialize in presenting new and engaging musical works. [I wonder what Franz Welser-Möst and members of the Cleveland Orchestra thought of the reviews, especially if they were indeed critical.]

You can check out the Rubin Institute website for complete details. If you didn't attend any of the performances, read the reviews and see what you missed.

While only one of the 10 student fellows received the $10,000 no-strings-attached prize money, each one had an equal chance to test the critical review waters, so to speak, boost their confidence via mentoring and immediate feedback from the professional writers, and get a sense as to whether or not they might want to pursue writing and or music criticism as a career or even a side gig (e.g. freelance).

I don't know how long the institute was in the making, but Rubin could have supported other established music programs, had a wing or a studio built at a music school with his name embossed on a silver plate, or even set up a scholarship in music criticism. Maybe he has.

For now, he chose to use his financial resources to immediately influence the lives of 10 young adults through a seemingly well-planned and executed program. That's what most impressed me. He had a vision, used his resources, made a connection, offered his commitment, and a unique program came to life. Easy enough, right?

Perhaps the young winner may consider following in Rubin's footsteps and use his earnings to plant a similar seed. One good turn deserves another.

Making a Book for My First Winter Term

Coming into the program, I only had a vague idea of what letterpress entailed, but over the course of Winter Term I became familiar with not only the process and jargon, but the history of the printing press itself.