We are delighted to invite you to read your flash fiction stories at the Valentine's Day Main Street Reading on Sunday night, February 15 at 8 p.m. Before we announce you as the winners of our competition...(etc).The five invited readers and their stories are:

We will be sending out a general announcement soon. Thanks so much and congratulations!
Lynn Powell & David Young

When I got the note, I started dancing in the library and letting out some jubilant obscenities. I hadn't expected to win, especially for a story I hadn't workshopped, in a style I was new at. It made the whole thing very, very sweet.

The Main Street Readings pair the Creative Writing department with the local community, which is flush with great authors. Events take place at the "New Union Center for the Arts", an old schoolhouse with a giant steeple. I've seen poetry readings there, children's theater, fashion and arts displays. Freshman year, Boredom, a semi-improvised dramedy group, used to perform there. The place reeks of good memories. 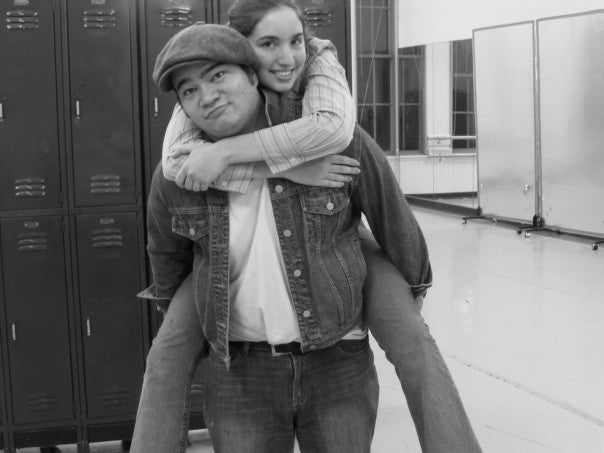 The V-Day readings started with the Outhouse Troubadours, a twangy, loud, and totally kickass bluegrass band. The players were tight, their sound was spot-on. Doug, who lived in my dorm last year, is an awesome banjo player. He murdered his solos in gorgeous new ways. Their fiddle, guitar, mandolin and upright bass players were similarly skilled -- the fiddler plays in OSTEEL as well and seems an all-around musical wunderkin.
I know their singer, Alex, who kicked the crack out of her notes. I didn't think Obies could sing with that much country. Best of all, they were all really, really into it. You can always tell when the band actually loves to play, and they did. 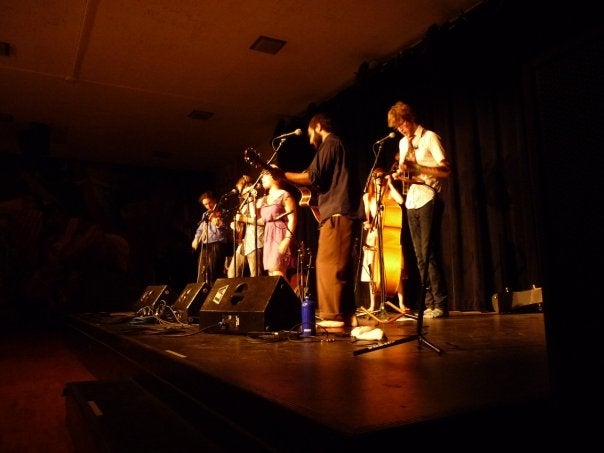 Outhouse Troubadours at the Cat, photo credit to Ethan Robbins.

After the band, Nancy Boutilier read love poems. Now, my inner sap aside, I don't really do love poems. They unleash whole new worlds of atrocious. I normally feel a bit nauseated after hearing five. But not now.
Nancy's poems were brilliant. She wrote the way I want to write: explosive, funny, poignant, amazing and sharp. At the end, when she said she liked my piece, I felt like I'd been regaled by sweet angels.

Then, it was the students' turn. Marilyn McDonald had written about elementary school love, which the night's organizer, Lynn Powell, read aloud. Marilyn isn't a student, but a violin teacher in the Con, now playing in DC. Oh, Oberlin. The second writer, Mack, wrote one of the meaningful, thoughtful pieces I can never create. He focused on the frayed relationship between a middle-aged husband and wife. The story was melancholy, but never outright sad, or depressing, just very... realistic. Anna-Claire's piece was incredibly visual, emotional without being melodramatic. It was like watching a gorgeous short film, rather than a story. It was simple--girl has sunburn, boy helps her find pharmacy--but loving in a larger and more gorgeous way.

The third story was easily my favorite of the night. Sarah wrote letters from a man begging forgiveness for his emotional unreachability. The letters were hilarious, describing angels in the toasters, and the alien-ness of the narrator, who called himself an "autistic badger." Sarah had a deadpan, Buster Keaton-esque delivery that proved remarkably effective, reducing the audience to spasms of laughter.

Despite my confidence with storytelling to large groups, I get terrible stagefright if I have to read in public. Like piss-myself-and-cry stagefright. I sat on my hands so they wouldn't shake. There were about 60 people there, but I knew many of them. Somehow, friends are scarier than strangers. My story was also the only "R rated" tale, driving a small family out of the room. It was a story of teenagers in lust, at Disneyworld. Some of my professors were in the audience, and the thought of saying inappropriate things in front of them was galling. Still, I did it.

Afterwards, there was wine and chocolate, the best way to end a weekend.