I went to my roommate Emma's house for Thanksgiving, but then found myself insanely busy and unable to post about it. I promised her and her parents that I would get a blog up eventually. Here, then, is the long-awaited post!

Emma lives in Michigan, so we had a fairly long trip ahead of us. Fortunately, Emma knew some people who were also going back to Michigan. They gave us a ride so Emma's parents didn't have to make the trip. We got in well after dark, but well before it was really "late," and I got to know Emma's family.

They're a lot of fun. There was an abundance of delicious food and good-natured teasing in the house. Her mother writes children's science articles and her father is a biologist. (Emma's worked for him over the past few summers and consequently knows everything you may ever wish to know about genetic drift and the domestication of radishes.) Her grandmother is a charming, witty woman. Her older brother is a photographer and computer programmer. He kept trying to eat my brains, which resulted in a pitched Nerf gun battle in Emma's room.

I felt right at home. 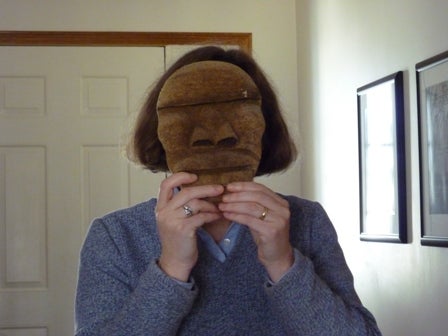 Emma's mom and a mask that had until recently been hanging on the wall.

The whole vacation was very low-key. We mostly stayed at Emma's house. She and I both had a whole lot of work to do, so that was convenient. We read and worked and chatted with everyone, and ate lots of food. Thanksgiving dinner was fantastic. Since Emma and her dad are both vegetarian, we had vegetable stew as well as a chicken. In addition, there was stuffing and apple-cranberry sauce and salad and homemade bread and two kinds of pie (pumpkin and blueberry). On Friday morning, I had a slice of each for breakfast. This is living. 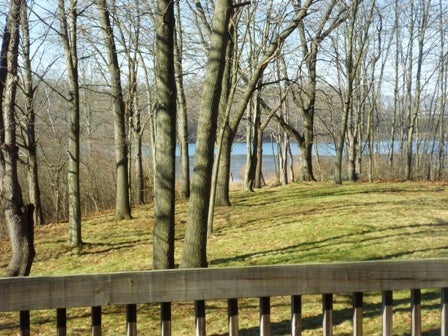 Emma says she grew up in a swamp. I assume this is it.

We did venture out a few times. On a grocery trip, we picked up Faygo Redpop, which is apparently a soda found only in certain parts of the Midwest. Emma thought this purchase was a terrible idea, because she had drunk the stuff before and knew it was mediocre at best. (I can report that it tastes like melted red Popsicles.) I was interested in it solely because of its appearance on a webcomic. We also got Vernor's ginger ale, which is a good regional soda. 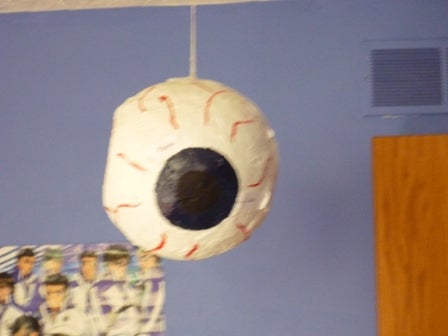 Emma has a large paper-mache eyeball dangling from her ceiling. I am somewhat alarmed at what sinister purpose it may serve--witness her evil grin (below). 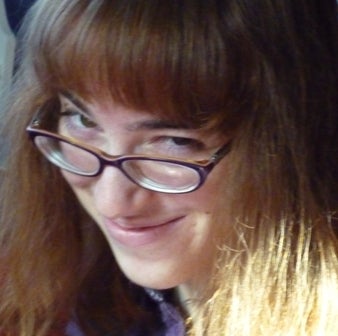 One time we hiked up the road, bundled up securely against the cold, to feed a neighbor's pets. They had a beautiful calico cat, a very large goldfish, and an axolotl. An axolotl is a kind of salamander that does not go through the usual amphibian metamorphosis, meaning the adult has gills and a tail, but also legs and feet. This particular one was also slightly translucent--from certain angles, and in certain lights, you can see his (her?) organs. It was also blind.

Emma and I were enthralled by this watery creature that looked like a miniature dragon. It didn't take long for us to realize that an axolotl spends at least 90% of its life underwater and therefore meets the criteria for a pet allowed in Oberlin dormitories. The neighbors, who heard of Emma's interest from her parents, offered her the axolotl when they got back. She brought him back with her after winter break and he lives in a bowl on her shelf. His name--Viceroy Bubbles von Salamancer/Axolmancer--is a long and complicated webcomic reference. Mostly, we call him The Viceroy. 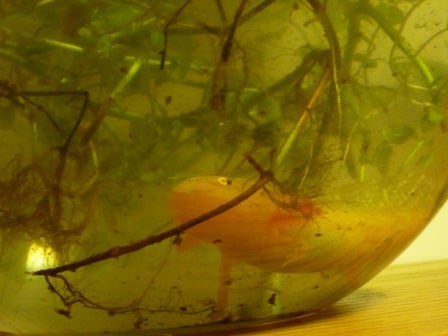 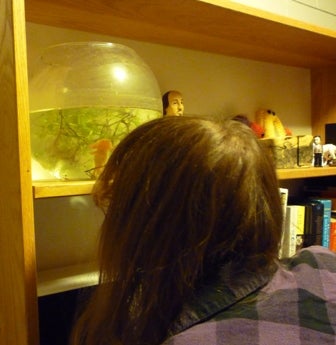 Emma and The Viceroy. 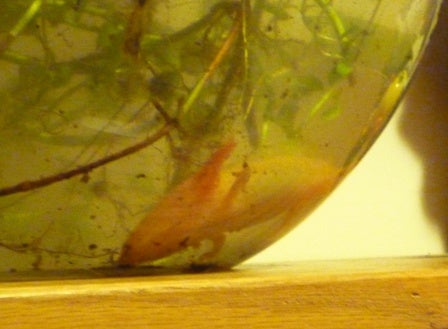 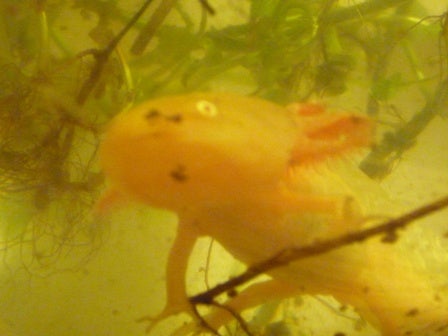 Back in Michigan, we did go on one really big adventure: Emma and Jake (her brain-eating brother) and one of their friends took me to my first ever Real Concert. It was in a small club somewhere in Kalamazoo. Originally, we only meant to stay for part of it and then go meet up with some more of Emma's friends somewhere else. The opening band wasn't all that great, though they were certainly enthusiastic. When they left, it was getting late, and we were still thinking about meeting up with people; we thought we'd stay for one or two songs, and then leave.

Then the real show started.

The band is My Dear Disco and I sincerely urge you all to go check out their music. It was particularly impressive live, of course--you can turn the music up as much as you want, but it's just not the same as a smoke machine, swirling lights, and body-shaking-volume amps backing up a group of people dressed in off-beat formal wear (think steampunk without the levers and gears). The lead singer would take out a megaphone periodically and sing through it into the mic. She wore dark glasses and a tailcoat and struck some of the most badass poses I have ever seen. Afterwards, we decided that everyone in the room must have been crushing on her at some point. It was dark and packed and people were jumping and dancing and cheering, and I loved it.

We stayed for the entire show.

By the end, my hair had somehow gone from mostly-straight to extra curly and fluffed up. Emma says that's a thing that happens. We all stumbled out of the hot indoors into the frigid, windy night, gushing about the awesomeness of the performance. I think Emma got a kick out of seeing how excited I was.

All in all, it was a great Thanksgiving.