Several weeks ago, I found myself on a top floor balcony suite at a ski resort 300 miles away, talking and sharing laughs with a couple of the freshest talents out of Cleveland. How did I wind up there?

It begins with the intersection of two things I have consistently underappreciated all my life, up until the past few months: (1) Cleveland, and (2) stand-up comedy. See, like many starry-eyed incoming freshmen, I came to Oberlin thinking I would be up in Cleveland all the time - on weekends, after classes, etc. I read up on the city, its attractions, the must-see spots. I just assumed it would be a big part of my college experience at Oberlin.

I've now been in northeast Ohio for four years and I still have not visited the Rock and Roll Hall of Fame. I have not gone to the Cleveland Museum of Art, the Great Lakes Science Center, or the zoo. I have not been to a Cavs, Browns, or Indians game (though the third of those will be changing soon!) I'm even so apparently lame that I have yet to explore any of the trendy hotspots like Little Italy, West Side Market, or Coventry. The truth is that Oberlin itself is awash with awesome things to do each and every day, and all the more so on the weekends, so it's plenty easy to not leave and still have a perfectly great time.

But! I did get lucky one year ago, to date, when I got hired at Dick's Sporting Goods in Elyria (between Oberlin and Cleveland) and became good friends with one of my coworkers, Quinn Patterson. Quinn has grown to be a bit of a celebrity around Cleveland, for his work as an incredibly talented stand-up comedian downtown and for single-handedly organizing and running jam-packed monthly comedy shows at Stubby's, a sweet bar up in Elyria. He graduated from Second City (think Amy Sedaris, Tina Fey, John Belushi...) and is a frequent headliner at the Cleveland Improv. Most recently, he opened for Sinbad at Hilarities 4th Street Theatre and just this week, was featured in the Chronicle-Telegram. 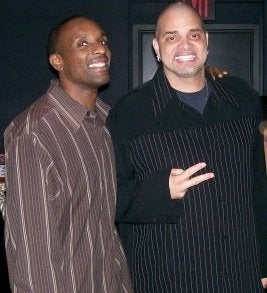 Quinn and I have road-tripped out together to shows and comedy clubs all over Elyria, Lorain, Cleveland, Cuyahoga Falls....even all the way out to Champion, Pennsylvania (which is how I wound up kicking it at that ski resort last month!) for a show he was invited to do at Seven Springs Resort.

From left to right: Quinn, me, and Ramon Rivas, who hails from Lorain, also rocks the local comedy scene, and did a guest spot for Quinn at Seven Springs.

Not only have I been lucky enough to see a huge variety of comedians perform, thanks to Quinn, I've gotten to go backstage and hang out with many of them, go out for drinks after their shows, hear them critique each other's acts, chat with them about their craft, and be completely steeped in the passion they put into what they do. Quinn and I come from some of the most polar opposite backgrounds and sets of experiences imaginable, but we share at least this much: we've both got a huge passion for telling stories, and we've got big dreams and plans for ourselves.

He's been trying to get me to collaborate with him on material, to help him write some jokes - for which I have made lame excuses not to do; humor-writing has never really been my cup of tea. But honestly, being immersed in the world of stand-up comedy these past few months has led me to think a lot about the power of laughter, and the energy that humor can bring to the act of storytelling. (I probably would have loved Aries' storytelling Exco, if I'd had the opportunity to take it.) It's changing - inspiring, really - my own writing process. Quinn and I learn from each other: I'm figuring out the ways in which comedy can inform my writing. He's figuring out the ways in which writing can inform his comedy. As for the learning-to-market-yourself thing...well, we're in that boat together. And all of it is certainly helping me get to know Cleveland better; just last night, Quinn and I were shooting pool with Mike Malone and his girlfriend at Flannery's Pub in the East 4th neighborhood downtown after Mike and the above-pictured Ramon performed a great show at Hilarities.

Really, Cleveland gets a bad rap sometimes - and it's never more evident than in the world of local stand-up comedy, where ragging on Cleveland is the quickest route to paroxysms of laughter. The MC at the Improv several weeks ago made this joke: he'd driven in from out of town, and said that when he'd punched in Cleveland to his GPS, it beeped a few times at him a few times and replied, "Why?"

Well. Sure, why Cleveland? Why Ohio, for that matter? (I'd answer "Why Oberlin?" too, but that's what the essay on the application is for.) Because the people here are absolutely fantastic. Cleveland may not be New York or Chicago, and sure, it may have some issues here and there with crime and such - but folks here certainly know how to keep a sense of humor about the world, life, and themselves. People know about bridging gaps, overcoming differences - and I feel extremely lucky to call one of the city's finest a best friend of mine.

Bottom line: Don't wait until your senior year at Oberlin to get to know Cleveland!

Ironically, when I came to visit you my freshman year I actually *did* visit Cleveland (since I got off at the wrong train stop!)

True to my creeper self, I've been stalking your blog for a couple of weeks- aka. since I found it. I have to say that it's quite enjoyable, and gives me some good procrastinating material.

Anyway, I hope life in the 'real world' is treating you well!

I had never spent time in Cleveland before last semester, and I have to agree with the song: Cleveland rocks. (Another pro-Cleveland pop-culture reference can be found in the tail end of season one of 30 Rock. It's probably on hulu.) Sure, it's a plangent symbol of America's long-since-past industrial heyday, but it also has lots of cool stuff to do, consistently gets incredible concerts (On my radar for the near future: Sleepytime Gorilla Museum and Mastodon are both coming to Beachland Ballroom on separate days), and isn't far from campus.

Natalie (aka Awesome-Face) - don't feel creepy. I'm thrilled to know you're reading and enjoying this! That comment warmed my heart.

Will - awesome! Agreed, as far as concerts go...I've been to a couple good ones at the Grog Shop, and though it wasn't in Cleveland, seeing Radiohead at Blossom last summer was amazing. I don't know why I've always felt like the travel time into downtown is inordinately long. It's not. I think we're just spoiled by living in a town where everything is within ten minutes one way or another. Sheesh, and I used to think a bike trip to Old B was a brutally long trek...all those blocks and blocks (two, perhaps?) down Professor Street...that's just absurd now :P