A week ago, it was my friend Aaron's 21st birthday. Four years ago, Disney released a movie called "Enchanted." What do these facts have in common? Not much, aside from some epic plans hatched by yours truly involving neon clothing, Super Mash Bros., and about forty Obies. Here's why.

On August 11, around lunchtime, I declared to a friend via skype that I had a new life dream and that this dream was to craft an Oberlin version of this scene from Enchanted. Take a moment. Watch it. It'll do your heart good.

Done? Alright. So that was my inspiration. Of course, I knew I didn't have access to Central Park, troupes of dancers, or groups of street musicians - but I do live in Oberlin, and that's almost as good.

My first step was to send out a mass email to people I thought might help me out. It started with "First things first: once you read past this line, you are honor bound never to reveal the contents of this email to Aaron Kozloff, or anyone else who might do so," and ended with "If you collectively inform me that I am out of my mind and my idea is walking a thin line between quixotism and idiocy, then I will lay it to rest. I promise." Within hours, responses began rolling in. There wasn't a single naysayer among them, bless their hearts.

Thus, I began to scheme! At first I wanted to compose a song, recruit musicians, and craft some choreography, all in the space of about a month. That was a bad (read: impossible) plan. Instead, I dropped the choreography idea entirely and settled for arranging an acoustic cover of two songs that Aaron and I both like, and contacted the marching band to see if they would back my singers. They said they didn't have time to learn the material. Bummer. Ditto for OSteel. Double bummer. It was too late to arrange an a cappella cover by then, so what I ended up doing in the end was borrowing Aaron's own boombox for the event. (Sneaky, no?)

Getting my ambitions into the realm of the possible was a good call, but coordinating everything still kept me hopping for a solid month and a half. I typed up lyrics sheets for both of the songs, met with co-conspirators on weekends to practice shouting with the music (the songs are mostly hip-hop mashups), and tried frantically to figure out a time during which I could lure Aaron into the midst of forty of his friends without him suspecting anything, and during which all forty of said friends could be present. It was no small challenge. 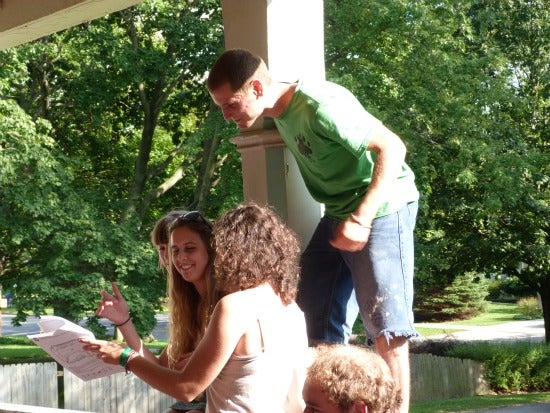 Some dedicated flashmobbers poring over a page of lyrics on the porch of Tank. (Photo cred: Agathe Le Berder)

The initial plan was to flashmob him on the night of his birthday, a Thursday. Thursday morning I woke up to an email notifying me that he had made some spontaneous 1 AM plans to drive to The Melt in Cleveland for a birthday dinner, completely foiling my plans to invite him to dessert at Cowhaus and flashmob him on the way there. I panicked for an hour or so, and then postponed the flashmob for Saturday, when Aaron was planning on taking a whole host of Obies to the roller rink as a birthday party. Saturday rolled around. Aaron spontaneously decided to postpone said rollerblading plans for another week, and I was (once again) stuck frantically trying to nail down a time when I could get all parties involved in the same place. By 6 PM on Saturday, I thought I finally had him where I wanted him: in his room between 7 and 7:30. Pshewwww, am I right?

Aaron turned out to be a far more slippery character than I had anticipated.

7:30 came and went. He was not where I thought he was going to be. He was, in fact, firmly entrenched at Agave for at least two hours on Saturday night, and there seemed to be nothing I could do about it, despite much urgent text messaging. Flashmobbers started having to leave because of other commitments. I started wondering what in the world I was going to do with the 103 balloons I'd blown up for the occasion. After some collective brainstorming, the few intrepid friends who had stayed hatched a plan to go through with it anyway, sans Aaron; we herded the balloons down the hallway to his room like mama ducks with scores of unruly, colorful ducklings, set up our camerapeople and their flashes (shoutout to the Plaut siblings, you guys are the best!), and flashmobbed Aaron's empty quad. 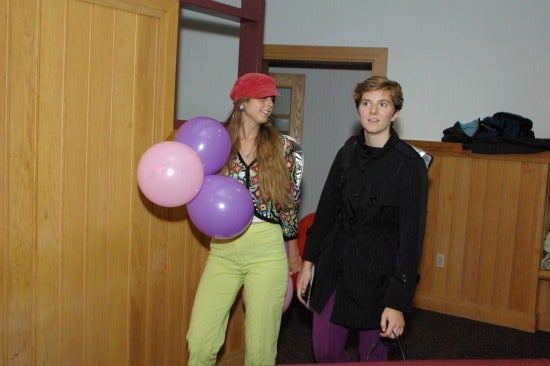 This is my "what do you mean, Aaron is at Agave?!" face. (Photo cred for this and every following picture: the stupendous Ben Plaut.) 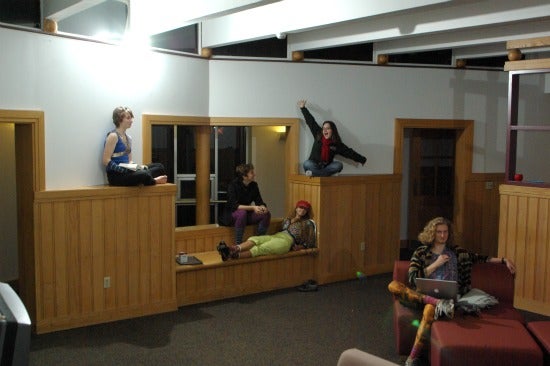 Here we sat for a good half hour, waiting, hoping, and goofing off. 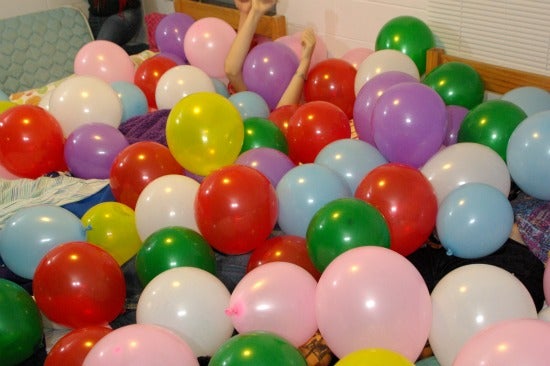 It was Shane's idea to flashmob Aaron's bedroom by bursting out from under a blanket of balloons. I love Shane. 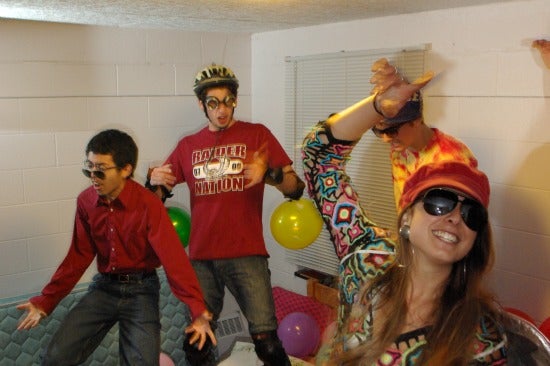 And there she is, getting the party started! 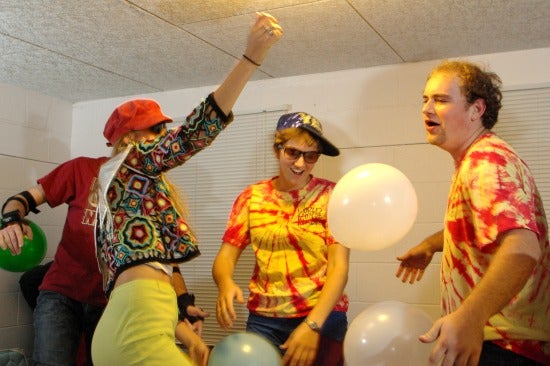 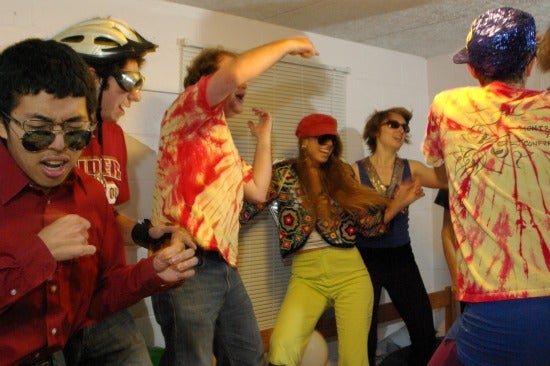 Ever danced on four beds pushed together so that the whole room is basically made of bed? I have. So have all of these people. 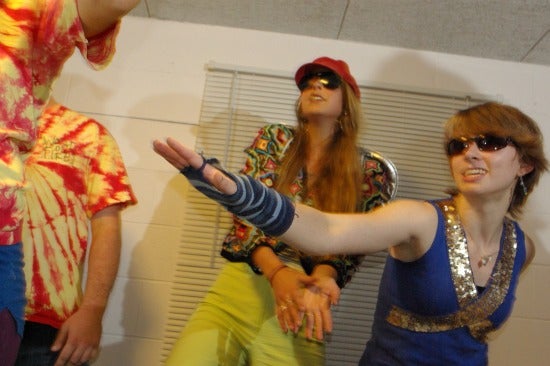 Christia: I got this, you guys. 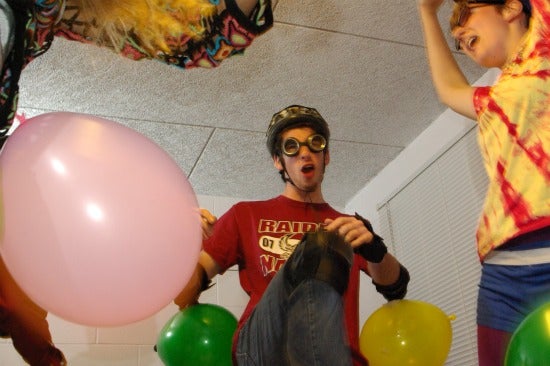 Will: I WILL STOMP ON YOUR FACE IF YOU DO NOT THINK THIS IS AWESOME. 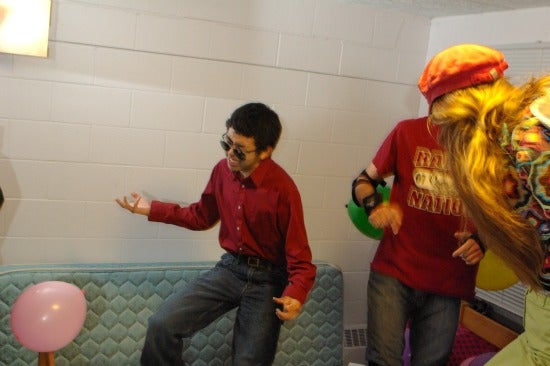 Ryo: this is so excellent I'm going to explooooode! 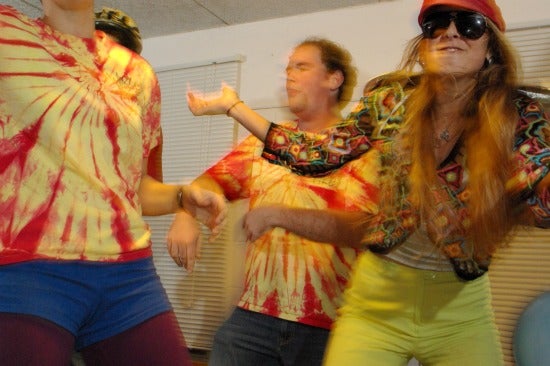 Shane: what is happening?! I don't understand how something can be so much fun!. 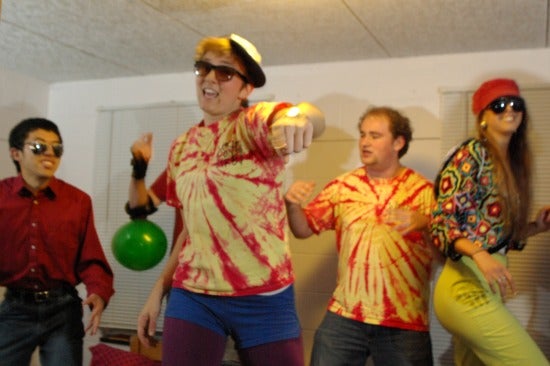 Me: you best be enjoying the crap out of this, my friend, because I know I am! 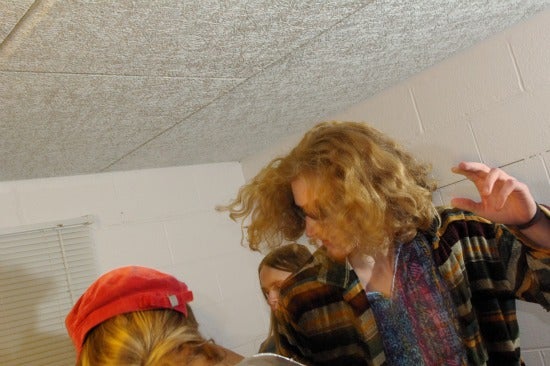 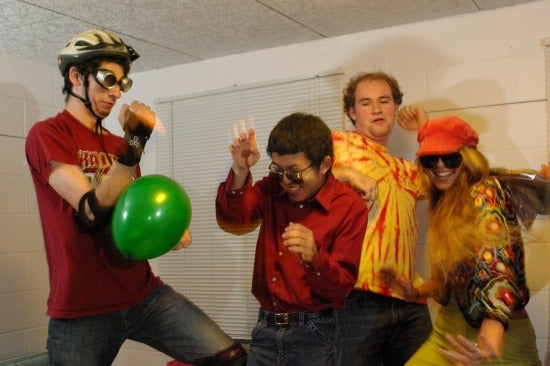 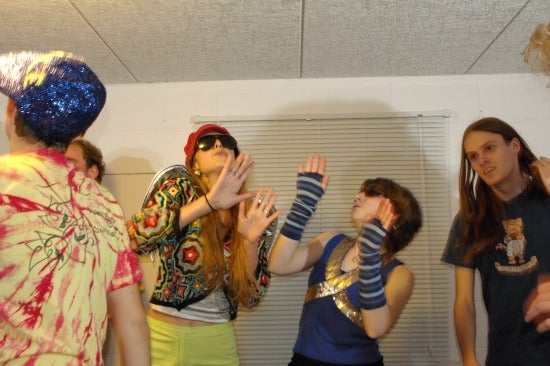 I think that Shane's dancing strategy is to rope other people into doing all of her moves with her so that if she ends up looking silly, at least she isn't the only one. 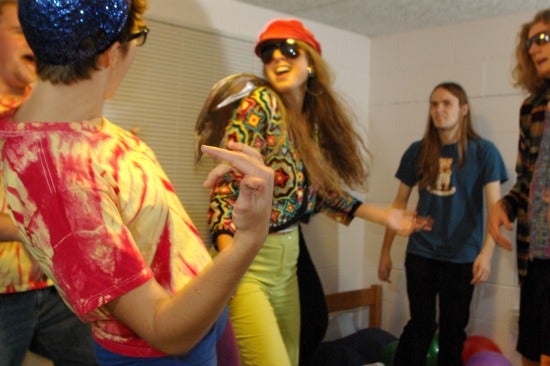 Pretty sure this was during the "WHATCHOO KNOW BOUT ME" bit. 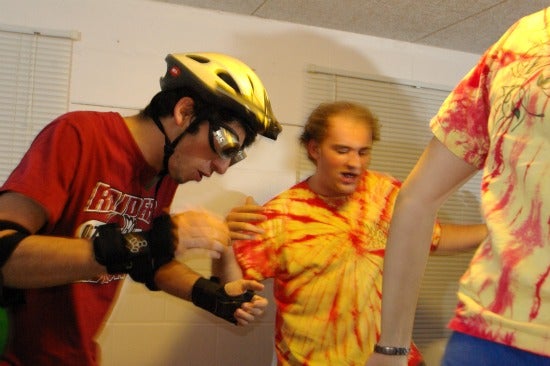 Will and Joel, gettin' down for the home stretch of the last song. Aw yeah. 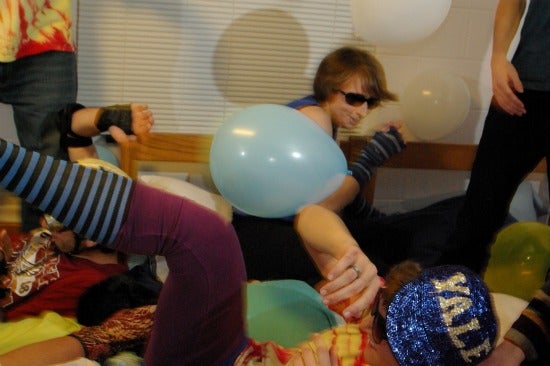 And then we all literally collapsed because, surprise surprise, shouting and jumping for seven straight minutes is SO incredibly exhausting. You don't even know.

In case you can't tell, I had a blast. But it was also a giant pain in the tuckus - especially the part where Aaron plays the blundering fool to my crafty supervillain and foils every single plan I make. Every single one. (I am never organizing a surprise for you again, Aaron Kozloff. Never.)

"What?" you cry, "Is that all? A handful of pictures? I thought this flashmob was all about the singing, not the dancing!" Okay, calm yourself, exaggeratedly irate reader. Even though it's six minutes and thirty-three seconds of pure silliness and involves me making a fool of myself for practically the entire time, I'm going to let you see the entire video in all its goofy glory. Here it is, courtesy of the lovely and benevolent Ma'ayan Plaut:

To everyone who did anything at all to further my dream: thank you so much. If ever you need help with shenanigans, look me up. 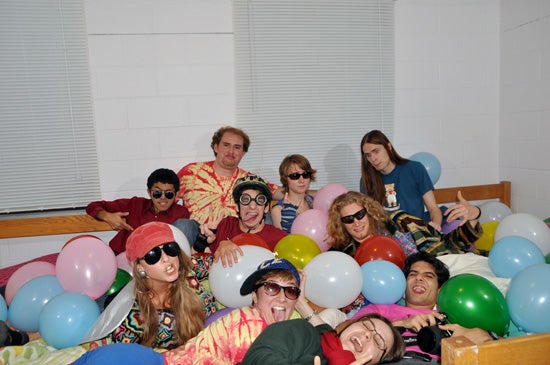 You are all obviously crazy

Yes. I am proud to be lending continuity to a long, strong tradition of loony Obies.

"...Aaron plays the blundering fool to my crafty supervillain and foils every single plan I make."

"A common mistake that people make when trying to design something completely foolproof is to underestimate the ingenuity of complete fools." --Douglas Adams

Yay! My dad commented! He is accurate in his description of us.

Also, Anon, you are absolutely correct. I said something along those lines while we were waiting to having our dance party.

THIS WAS THE BEST NON-BIRTHDAY THING EVER. Like, seriously. Aaron should miss out on all his birthday celebrations ever because it was so much fun. If he were there, it would have been fun too... but this version made so much better a story.

Throw a shoe! So regretful I missed the final performance. We should sing on your porch more often.

Great title for your story!

Ma'ayan: Do you know, I did actually kind of prefer it this way. It's much more amusing.

Mama: I thought it fitting :)