I, like Will, am on campus for Fall Break. And, much like Will, I've been eating home-cooked gourmet food: 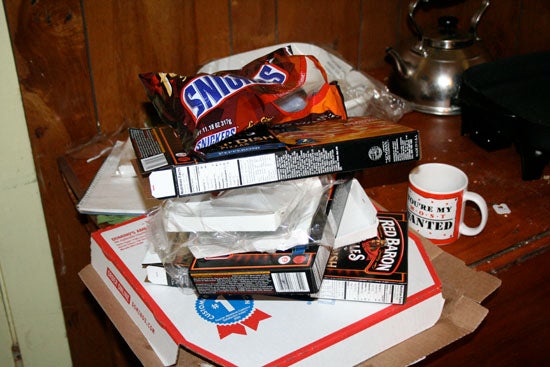 Okay, so I ran out of healthy food on Wednesday, and I'm too lazy to get groceries. Actually, it's all quite reasonable. See, I want to make the trip out to Trader Joe's (it's about a 20 minute drive) because they have cheaper and yummier steak than IGA (the in-town grocery store), but in order to do this, I would have to fill my car's tires with air, and I'm too lazy to do that. What can I say? I used up all my work ethic on midterms.

I really did eat well at first; my brother sent me an excellent recipe for pan-seared steak, and I liked it so much that I used up my week's allotment of steak in four days. Whoops!

But there's more to an on-campus fall break than holing up in one's apartment and watching Hulu until one's eyes bleed. There are no lines for breakfast at Black River! There are small children and middle-aged people--who don't work for the College--on the streets and sidewalks!

I went and saw Where the Wild Things Are at the Apollo, and I was shocked by the absence of coupled-up college kids. There were children! With parents!

(Digression: I was a little disappointed by Where the Wild Things Are because I got Spike Jonze mixed up with Spike Lee. Needless to say, I was expecting something, well, different... /Digression) 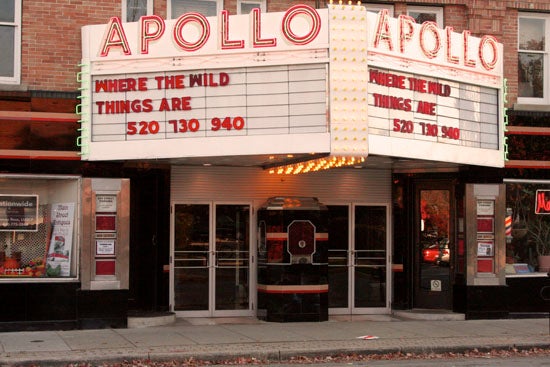 While downtown Oberlin is full of non-college-aged people, campus proper is just empty. It's a little bizarre--pretty and refreshing, but bizarre. 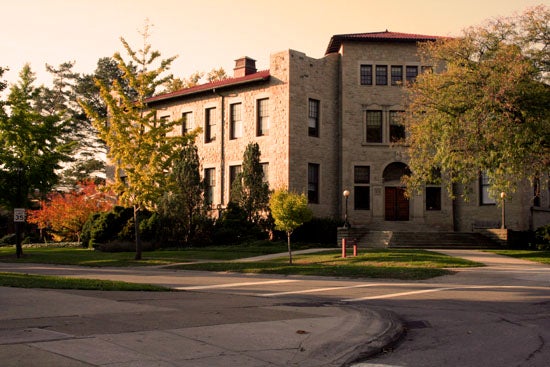 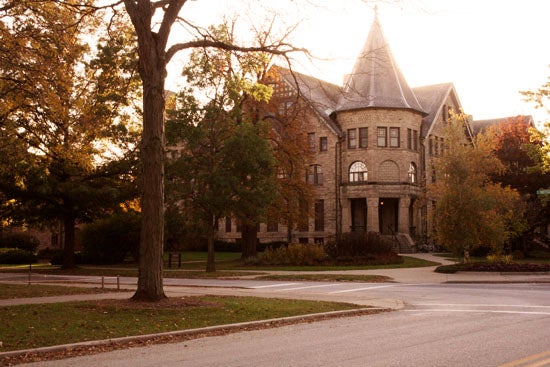 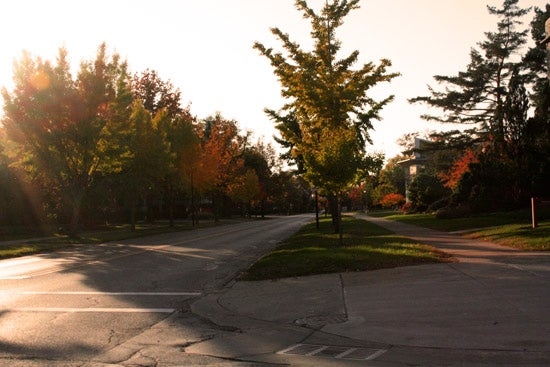 Normally, these parts of campus are full of students bustling to and from classes/food/social engagements. Now, it looks like a (as Will says) Zombie Apocalypse.

It's actually quite nice, in its way. I've been learning to channel my inner old man, so I don't appreciate all those damn kids making a ruckus on my street at all hours of the night. I live, you see, very close to the Union Street student housing (or the Oberlin Levittown, as it's sometimes called). 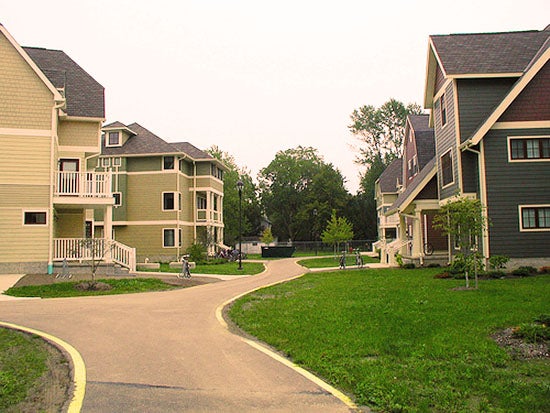 Stolen from here without shame or regard for potential future litigation.

Union Street is home to quite a bit of partying late-night studying and sometimes gets a little loud. This last Saturday night was notable for its stillness. Not once did I have the urge to jump off of my la-z-boy and yell at passersby.

I've also had time to catch up on all sorts of things for which I simply don't have the time during the height of classes. Seriously, the stack of comic books and magazines was getting a little daunting. I also got to work on the Wilder Voice website, which just beta launched! w00t. You can see for yourself here. Keep in mind that it's not done yet, and it looks funny, I hear, if you don't use Firefox.

If you have no idea what Wilder Voice is, then you should definitely check out the website. If you're too lazy (or ensorceled by my witty prose) to click the link, then Wilder Voice is Oberlin's magazine for longform journalism and creative nonfiction. We also have a faculty submission each issue, some short dispatches (a la "The Talk of the Town"), a smattering of poetry, and one piece of fiction. It's pretty awesome, and if you do come to Oberlin, you should think about applying to write for it.

I know that some people in the administration don't like the image of Oberlin surrounded by corn. After all, we are a cool 45 minutes from cool Cleveland (and 15 minutes from not-quite-as-cool Lorain and Elyria). But Oberlin is far from a suburb--or even an exurb. I would hold, pretty strongly, that Oberlin is a small town surrounded by rural Ohio. Granted I grew up in a fairly dense and medium-large city (Minneapolis proper). But, if you're wondering why Obies love to say that Oberlin is in a cornfield, maybe it's because you can see cornfields from campus: This is the northernmost point on campus: the athletic fields 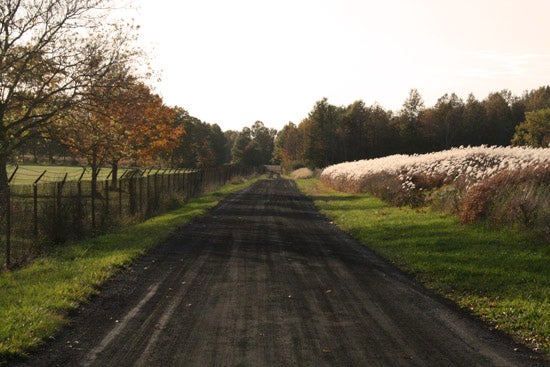 The edge of Oberlin 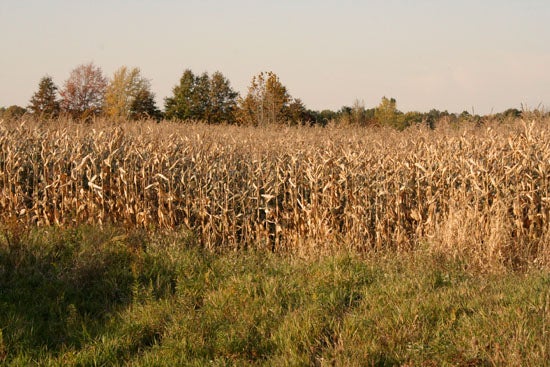 The view from the north fields 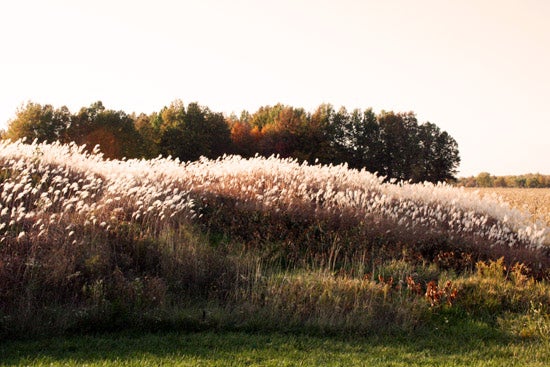 Yet another reason to stay on campus over breaks: it's super pretty. Plus, you have time to do things like wander around north campus for a couple hours just to prove a point.

I was involved with a quite horrendous short film shoot in that cornfield. I love that cornfield and those cool wispy grasses, too, but the movie will never see the light of day. I have no idea where it is, but it was like a trailer for the worst horror movie ever.

I love campus during breaks, but I've never spent a fall break there, only spring, which is different in a much muddier sort of way.

Well, damn it, now I want to see that movie! If you ever do find it, I sense a good idea for a blog post...

As for breaks, I actually really enjoyed both Oberlin-in-the-Summer and Oberlin-in-January. Perhaps Spring would be a nice way to round out this year.

I'm becoming a hermit, aren't I?

When's Wilder Voice calling for submissions? I want to submit some writing and/or photos!
p.s. the link on the website to my article from ages ago doesn't work :(

We're already overbooked on writing this semester. If you want to submit photos, though, email wildervoice[at]gmail.com by next Monday. If you're wondering what we're looking for, you can email me... john.sheffield.west[at]gmail.com

As for your article, my next big dump of stuff onto the website will be later today. And yours is on the list. I don't know if I told you this, but your "The Tail of the World" is one of my favorites.

Ha - I was going to help you cement your point about the cornfield issue by linking to google maps a while ago, but I never got around to it. I think your photos are perfect. Regardless of whether administrators or former employees of the communications department LIKE the image of Oberlin among cornfields, it's pretty much true.

Awkwardly, we're in the middle of cornfields _and_ a half-hour from Cleveland. As entertaining as the cornfields are... they don't have Beachland Ballroom, dance clubs, tasty restaurants, or an awesome science museum.

@communications_lackey: In true Oberlin form, even our placement is awkward. After all, we exist--somehow--both in a rural area and somewhat close to Cleveland.