My family has three refrigerators. One is in our kitchen; the other two are in our garage. They are always overflowing with food, and my least favorite task when I'm helping my mom with the holiday cooking is digging around in the freezer for some obscure ingredient. It's always there, but it's also always under a pile of frozen birds, fish balls, and other rock-hard frozen items that usually roll out and smack me on the feet.

Yesterday I was looking for a bag of frozen shrimp in one of the garage fridges, and I found a popsicle tucked in the nooks and crannies of the freezer. My family never cleans out our fridges, and none of us has eaten a popsicle in probably three years, so the popsicle was probably about as old as my visiting toddler cousin.

I tucked it back in to be rediscovered during the twilight hours of the apocalypse, as a reminder of the high fructose corn syrup days of my childhood.

I hope that this blog will serve a similar purpose as the popsicle: I'll stumble upon it one day in my hoary, career-laden days and unwrap this blog entry to retaste the sticky saccharine days of my youth.

Unfortunately, from where I stand, the days were more like essence of ipecac than sticky and saccharine. Before I step into 2012, relatively less wide-eyed than I was stepping into 2011, let's remember the good old times from this past semester:

1) My decision to go to physics graduate school.
Man, they do not make it easy for you to decide to go to graduate school. It's a big commitment, going to school for at least another 5 years in a specialized field, and on top of that I had to take two standardized tests, the GRE in August, and the physics GRE in November, and fill out applications well into winter break. I won't get into the long-winded rationale of why I applied to grad school right now, because I just finished writing a zillion essays about it, but if you wheedle, I might talk about it in a later post. I'm finally done with my applications, and now I get to wait for the sweet sting of rejection or the sweeter bro hug of acceptance.

Speaking of bro hugs, shoutout to my bro Jacob. We tenderized our brains in preparation for the physics GRE together. 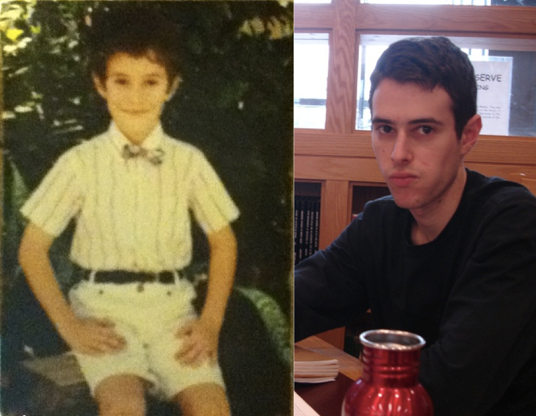 Before and after: The GREs hardened young Jacob (left) into the mongrel on the right.

2) The Clever Brothers hit a rough patch.
The Clever Brothers duo, consisting of my housemate Chloë and me, formed in September. We do covers of pop songs in the voice of Creed. The Clever Brothers hit a rough patch in October, when we realized that we were in school and there were things called grades. We stopped practicing, and we each blamed the other for being the Yoko Ono of the group. But then I brought Chloë and our other housemate Nattie home with me for Thanksgiving, where the three of us performed karaoke, complete with breakdancing (provided by Nattie), at a local bar. We sang Creed's "One Last Breath," as well as a song that no one requested called "The Humpty Dance," which I had not heard before. "The Humpty Dance" involved very suggestive rap lyrics. Let's just say that the fine people of Athens, Ohio, were highly impressed, and that it portends the Clever Brothers' return in a big way. 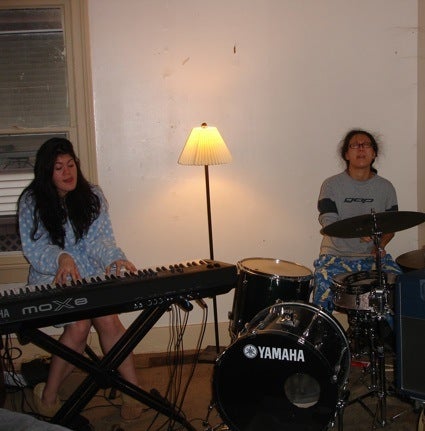 The Clever Brothers find band equipment in their living room one morning and decide to have a reunion concert.

3) The Picassos.
I would have posted this a long time ago, but I was already so popular that I didn't want the hordes of people swarming my house to get any bigger. For art rental, my housemates Chloë and Carrie spent the night sleeping in the art museum courtyard and managed to snag two Picassos for our house for the semester. Generally speaking, our house is a shithole, and the Picassos cast a classy light on our decrepit shack-cave. 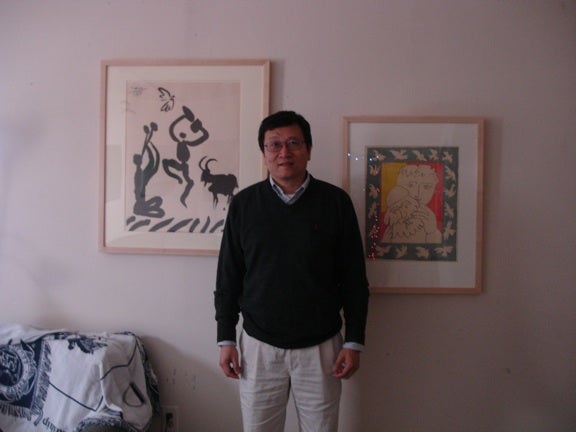 My dad poses with the Picassos. 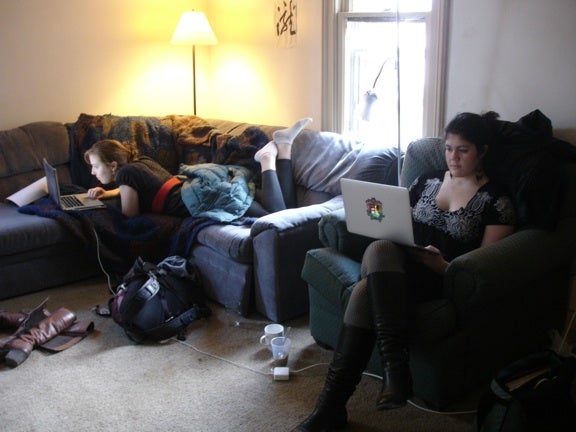 This is what Carrie and Chloë do when they are not bringing in priceless artworks into our home.

4) The Punch Brothers opened for Paul Simon.
I have said many times on this blog that my favorite band is the Punch Brothers. I learned the hard way that you should never, NEVER, NEVER ever ever EVER go to a concert where your favorite band is the opening act. I had only previously been to concerts where the Punch Brothers were the sole performance. What ended up happening was that my friends and I drove out to Columbus to the concert, and we got all manic and mouth-frothy for the PBros, who only played for half an hour. Then Paul Simon came, and although I love a Paul Simon tune, the dude doesn't have his live act together anymore. He managed to half-ruin many of my favorite Paul Simon songs, and he also didn't play "Punky's Dilemma." I had to take a ten-minute nap to avoid being too depressed, and woke up to a bunch of middle-aged Paul Simon groupies dancing in the rows in front of me.

I realize I just complained about going to a Paul Simon concert. Seriously though, you would have agreed with me, had you been there.

5) I brewed beer for the first time.
My friends got me a beer kit for my 21st birthday. It's still fermenting. It might taste horrible.

6) I went to San Francisco for the American Geophysical Union Conference in December.
I presented a poster for the first time at an international conference! It was on my Hawai'i atmospheric research. The AGU Fall Meeting is humongous, with thousands of scientists from all over the world from all sorts of earth science-related disciplines, including atmospheric science, meteorology, astronomy, climate science, and more. I went to a few talks, including one where a scientist refuted Will Happer's claims that global warming isn't real. I got to talk to this Spanish dude who researches ice formation on Mars and another guy from Wisconsin who models magnetic fields in turbulent molten metal. I got to go because of this cool scholarship from the NOAA Office of Education. For eating highlights, see my cooking blog.

7) My honors project is getting off the ground!
I spent a chunk of this semester's research time wrapping wire into coils in order to cancel the earth's magnetic field from our data, which is not that exciting. But we're really close to getting signals from our potassium, which means that I will have data to mess with during winter term! Speaking of which, winter term is coming up soon!

I love everyone mentioned in this post including your father.

Nice post Sophia. How grown up you are now.

I love all these photos so much. Especially the Jacob ones.

Aw man but I just noticed the title of the post and now I'm upset.

Also, I've never seen Jacob look so wizened. You should display that picture as a warning to future generations.

Also, CONGRATS ON GETTING ACCEPTED INTO GRAD SCHOOL!!! (sorry I had to publicize just a little bit)