One of the things I like about working in higher ed is being and working around smart people. That's not to imply that smart people aren't in other spaces, but I've come to expect people who work in higher ed to be smart, e.g., thoughtful, innovative, inquisitive, resourceful, and who like to learn for learning's sake. Of course there is plenty of learning with a purpose happening at Oberlin and the recent Senior Symposium serves as testament.

This was the college's second such event, held to "celebrate the scholarly and artistic achievements" of Oberlin students, namely seniors.

I headed over to one of the most beautiful buildings on campus, the Science Center, to hear opening remarks from Arts and Sciences Dean Sean Decatur and Randal Doane, associate dean of studies.

West Lecture Hall was sparse. Including myself, about a dozen people may have been present to kick off the event. Sean Decatur called it an opportunity for students to bring their work from laboratories, libraries, and studios to share with the community at large. The symposium, he said, establishes a forum to recognize and celebrate these accomplishments.

I was rather worried that the turnout for the individual presentations would be dismal, but then I thought, who is this symposium really for? Does the auditorium or classroom need to be filled to capacity to justify the event's worth? Nah.

Since I was not able to attend all the sessions, I chose the first. The title intrigued me, Constructions of Differences in Music, Medicine, and the Military, as did the descriptions of the papers the students planned to present. Additionally, they were talking about subjects of particular interest to me: sexually suggestive lyrics and rhythms in music and its impact on youth, black women in the military, and reproductive health as it relates to a new drug called Gardasil.

Cindy Camacho, Kyla Moore, and Giordano Hardy-Gerena took part in the panel. I happened to sit next to one of my colleagues, who said that one of the presenters was a former roommate. I commented how cool it was for me to be around smart young people.

All three demonstrated a genuine interest in and of knowledge of their subject matter, which made me all the more interested in what they had to say. The 15-20 minutes allotted to each student felt like an appetizer with no entrée forthcoming. I wanted more.

I also wanted to know what might become of the work they've done. At the very least, it would be neat to see their work published in an academic or research journal, or perhaps have some of their ideas incorporated into the larger music, research, or service-oriented communities.

For example, I wondered if Cindy would use her extensive research to help Latino communities better understand the disparities and the barriers that exist that may prevent them from receiving important information about reproductive health. Cindy recently completed a community-based research project with Family Planning Services of Lorain County. She said she wants to share her findings to support the agency's outreach efforts.

Will Kyla, who comes from a military family, use her research to help black women in particular reexamine their status in the military in terms of service and advancement and whether the benefits of enlisting outweigh the risks? Will Giordano's research offer new insight and perhaps resurrect a once-heated debate in Puerto Rico about the use of suggestive lyrics of a music genre, música del perreo?

Time will tell, I suppose. And should any of their work or those of the other 37 students move beyond Oberlin's academic borders, I can say I was among the first to hear about it. 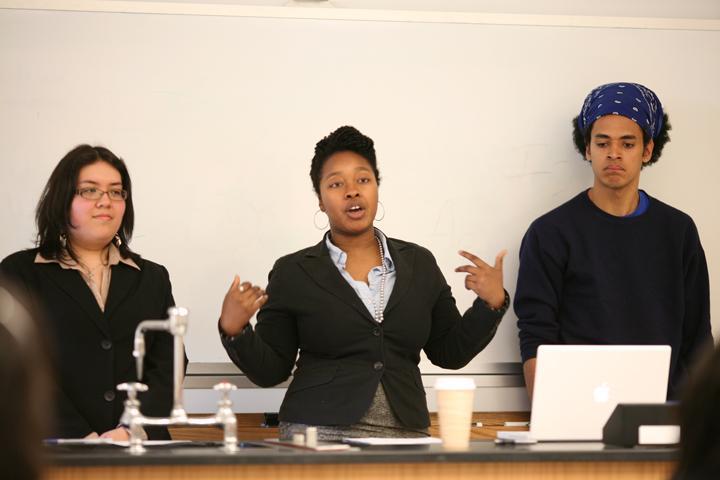 Note to Giordano: At the start of your talk, you wondered if it mattered how one looked when making a presentation in terms of "proper" attire...the starchy white shirt, tie. Time did not allow us to explore this idea during the Q & A. For me, it matters more that the person knows the subject matter thoroughly than it does how the person looks. However, be sure that how you look and what you wear does not distract or detract from what you say.