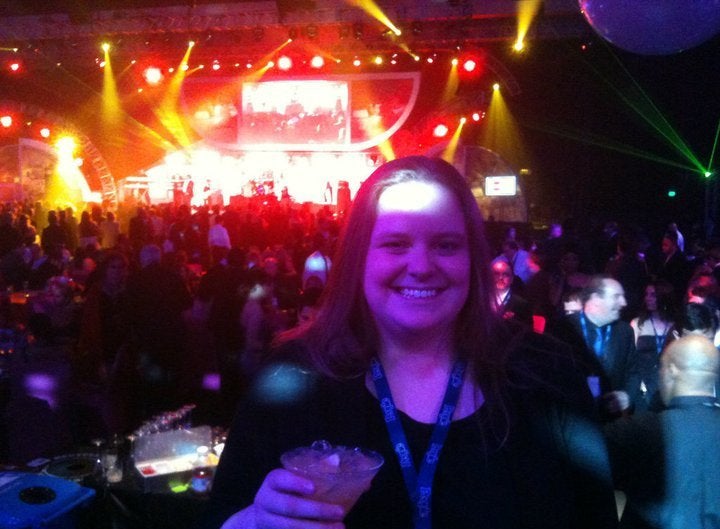 Jordan at a Grammy afterparty. Yes, that's right. Those Grammys. And yes, she got to go to the Grammys themselves. I am jealous. So, so jealous.

Jordan is a fellow history major, lover of all things European (especially as they relate to France, Germany, and Eastern Europe), and the awesome co-inhabitant of my apartment. This is the story of how we came to live together!

Back in the fall of 2008, Jordan and I both took a class with Professor Sammartino entitled "Germany and Eastern Europe from 1848-1989." It was a fairly large lecture-style course so I didn't really get a chance to meet a whole lot of the people in the class. We actually talked to each other near the end of the course (I graciously let her keep a map given to our class by a guest lecturer who brought one too few copies), but we never really got to know each other. It would not be long, however, before we actually met and became friends. Also, she totally still has the map.

For Winter Term sophomore year, Jordan and I both ended up interning on the Hill. Jordan worked for then-Speaker of the House, Nancy Pelosi, while I worked for then-Chairman of the House Committee on the Judiciary, John Conyers, Jr. During the first week of our internships, there was a reception on the Hill for Oberlin students and alumni, hosted by President Krislov. I found this reception to be super awkward - I was new to D.C. and didn't know anyone at this point, so I was awkwardly standing in a corner, holding my Diet Coke in a wine glass (but seriously, who serves Diet Coke in a wine glass?).

Jordan came over to me and started the "hey, didn't we have class together?" conversation that soon led to bonding over the awkwardness of the reception and our mutual love of all things European history. We swapped numbers on the Metro and made tentative lunch plans for the next day.

Our intern lunches became a regular occurrence - we would swap stories about the craziest things that had happened to us that day (so many crazy things, all the time), gossip about whatever was going on on the Hill, and, on one special occasion, Jordan nearly ran into and almost knocked over Dennis Kucinich in the cafeteria in the Rayburn Building.

She hates that I tell people this story, but I love it, so I'm going to tell it. We were in the Rayburn cafeteria one day grabbing lunch, and Dennis Kucinich was behind Jordan. Not knowing that Kucinich was behind her, Jordan turned around rather abruptly, nearly running into him. I burst out laughing (probably leading to everyone thinking that I was just another crazy intern) and have forever teased her about this incident. It really wasn't that big of a deal, but it's a fun story nonetheless. 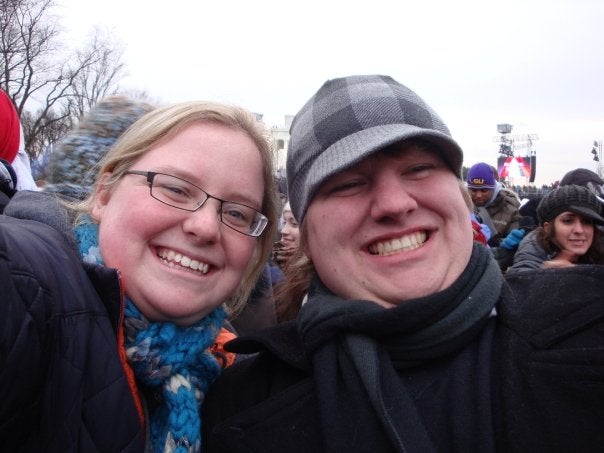 At the "We Are One" concert that was held a few days before the inauguration of President Obama.

After Winter Term, we returned to Oberlin and continued to hang out, most notably continuing our "intern lunches" by having lunch together once a week. We continued to have these lunches throughout the latter half of our second year and our entire third year. In the spring of 2010, we took another class together, Prof. Len Smith's "World War II and the Making of the 20th Century." When the time for signing up for housing for our senior year came about, I decided to ask Jordan if she wanted to live with me.

I knew that living with your friends can be tricky - I've watched several friendships deteriorate over living situations. Life lesson: just because you're friends with someone does not mean that you can live with them. Jordan and I, however, got along swimmingly and I figured that we would both be chill enough that there wouldn't be any major problems. Turns out I was right!

We chose an apartment in Firelands, an apartment building owned by the college. Our apartment has enough space for the two of us. Here are some pictures (excuse the poor quality - I took them with my phone)! 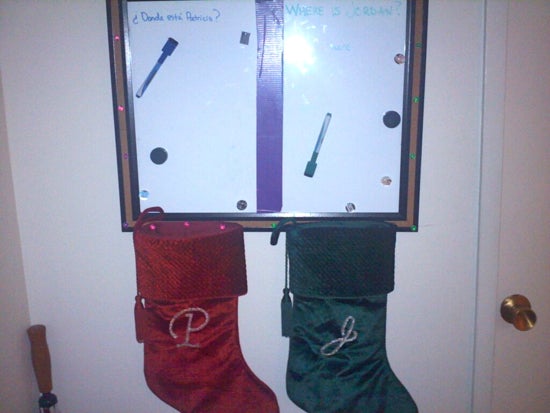 This is the whiteboard in our main hallway that tells us where the other person is. Usually it contains a mixture of our schedules and snarky comments to each other. You will also notice that I refuse to take down my Christmas decorations, even though it is May. 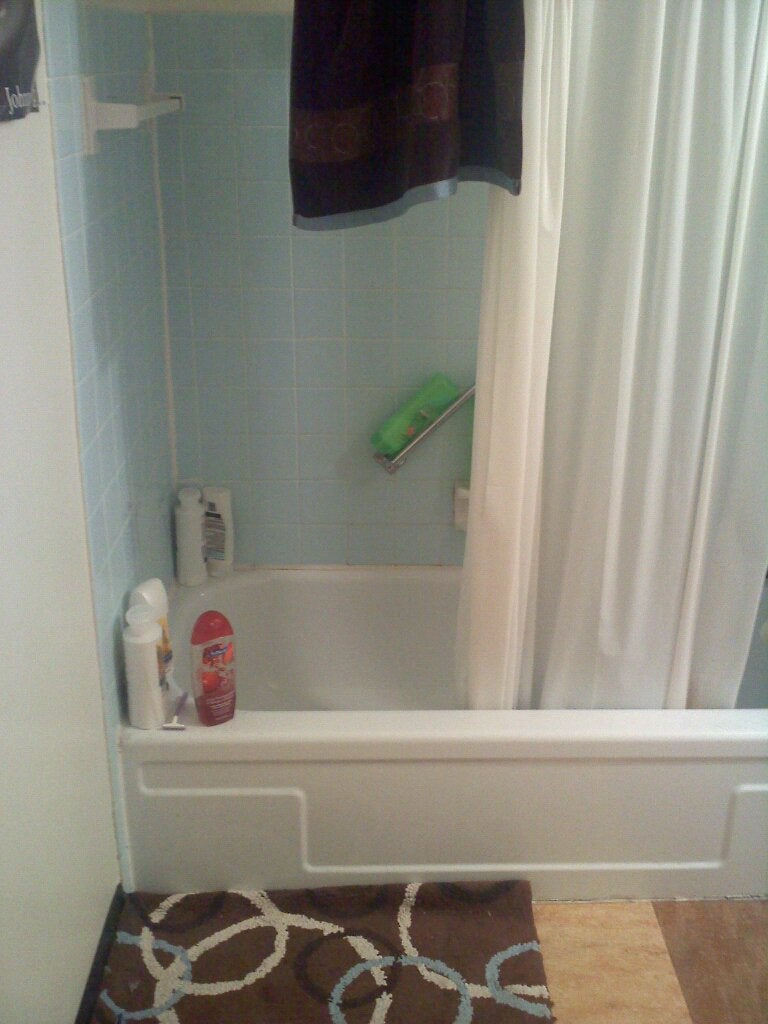 My crowning achievement while decorating our apartment is when I unintentionally matched the color scheme of the towels/bathroom to the tile in our shower. 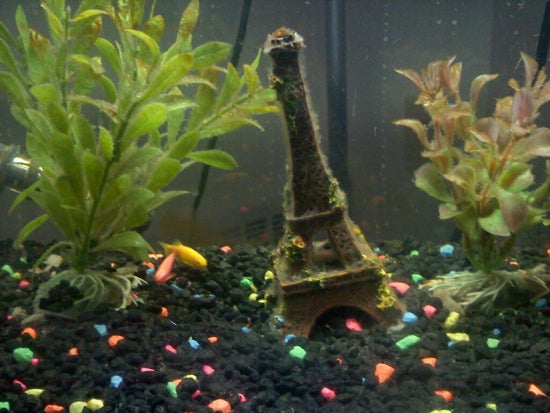 Our fish tank has a miniature Eiffel Tower. We both agreed that this was necessary. 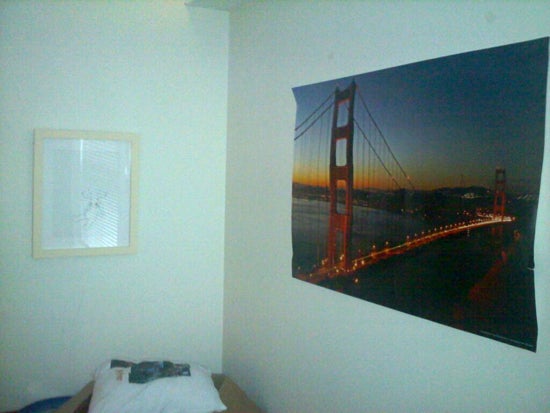 This corner has a poster of the Golden Gate Bridge and a piece from Ali's art show! Not pictured, but nearby, is a print of one of Ma'ayan's beautiful photos. 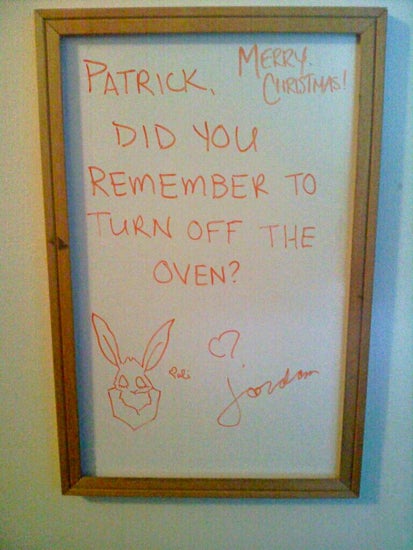 Jordan wrote me this note after discovering that I had left the oven on all night on the night she moved in (after making her a delicious dinner, I might add). It has reminded me several times to turn off the oven. Note the "Merry Christmas" that I have refused to take down. Also, Ali drew a bunny before she graduated, and I refuse to erase that either.

I have a hard time explaining my friendship with Jordan, since we're both so delightfully strange. To better understand us, here are some of our interactions via Facebook. I believe they explain our friendship quite well. 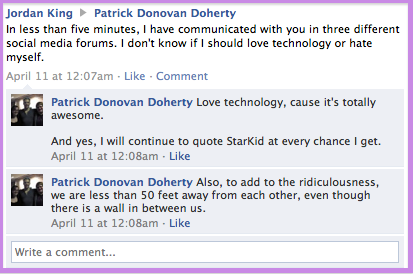 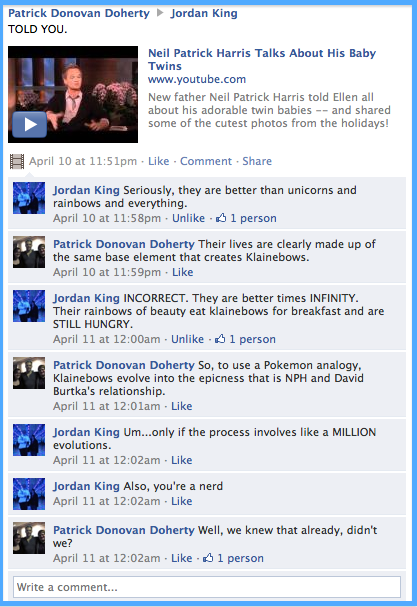 Yay for Jordan! She is awesome! In fact, she is so awesome that she read through my entire thesis and left me some excellent comments. Here are some of those!

Jordan is not a fan of my love affair with commas.

True history nerds will understand the humor in this excerpt from my thesis.

Once again, I may overuse commas sometimes. What can I say? I love clauses.

Moral of this story? Jordan is awesome. I'm extraordinarily grateful for our friendship.

I think that, actually, this was, really, my favorite of your blog posts.

@Jordan: It is quite possible that it's my favorite of my blog posts, also. Partially because it was so easy to write, partially because it is so silly, and, most importantly, because it documents the hilarity of our friendship. And yes, I caught your excessive use of commas in your comment :P

I love beautiful friendships that are hard to explain. I'm glad you two live together in the land of fire.

@Ma'ayan: DESSERT PARTIES. Oreo balls are the most amazing things ever. I'm so glad Jordan exposed us to their magical powers. Perhaps I should try to arrange one last dessert party before graduation.

I'm an incoming freshman and I'm having an amazing time reading through all the entries on here. I love reading all of your posts but I had to comment on this one since I'm a total Starkid!

Just wanted to tell you I thought this entry was totally awesome! Oh and I went to Darren's show in NYC the other day and Lauren Lopez was there! Thought you'd appreciate that...

Too bad you've graduated I feel like we could have had some epic Starkid convos!

@Rosie: Hi! SO JEALOUS that you went to Darren's show in NYC. Obviously I have stalked all the videos on youtube, but I'm sure it was not the same. You must must MUST be friends with Helena next year so that if/when I come visit we can have nerdy Starkid bonding. Have a wonderful summer and enjoy your first year! It's gonna be totally awesome :D