I have eleven bruises on my left leg alone from trapeze. Two nasty rope burns have graced my feet, and have turned into scabs that might scar. I have blisters giving way to calluses on the palms of my hands. I've gone through half a jar of Tiger Balm on my sore muscles. My elbows and wrists are confused at why I compress them daily, and sometimes I can't tell whether I'm hungry or if it's just my sore abs. This winter term, I am training under the intensive program at Circus Warehouse in New York City.

I love Winter Term. There will never again be a time in my life when I can drop everything for four weeks and do whatever I want without having to worry (too much). My academics halt for six weeks, my job at Oberlin puts itself on hold. I get to be a real human being for a little bit: live in an apartment, grocery shop for myself, realize that there really will be no food in the refrigerator unless I grocery shop, and most importantly for me this month, train and train and train.

Since beginning my time at Oberlin, I have become progressively more involved in the circus community here. It began in the fall of my freshman year when I started learning partner acro (cited in several of my other blog posts). That spring I performed in OCircus. Being around my friends doing silks, trapeze and tumbling, I couldn't help but develop an interest in all things circus. While I am a humble beginner and love circus arts as a hobby, training at Circus Warehouse stood out as the single most valuable thing I could spend my January doing. Despite feeling inadequate and unprepared for the intense amount of training I was about to begin, I knew it was what I wanted. And what I needed. 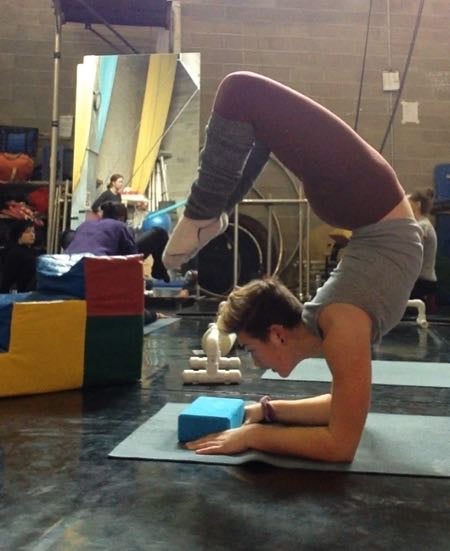 One goal of mine for the month: Touch feet to head. I am close. I can smell it.

I'm staying in an apartment in Brooklyn, a sublet I found through an old friend who went to Pratt and posted on their housing forum for me. My floor is slanted and the radiator leaks water onto the floor, but that also happens in my room at Oberlin so it's not too much to get used to. Last night one of my roommates and I smelled something burning and spent half the night sticking our heads out our windows and running around the hall in our underwear trying to figure out whether someone else's apartment was on fire or they were just cooking bacon at midnight. We never did figure out the source of the stench, but thankfully there was no fire. I awoke to the same room and apartment that I'd gone to sleep in. At least I found a way to bond with Shannon.

I take the G train daily from my apartment in Brooklyn to Long Island City for my training. The G doesn't really exist, but if you think hard enough and curse blindly at the dark, empty subway tunnel, sometimes it appears. The commute isn't so bad once the train comes, and I've read more this month than I usually do because I spend my morning and evening train rides dividing my attention between the five books I'm reading. It hasn't been too cold in New York this winter either, which makes the walks from the subway to Warehouse not bad at all. I thought, after at least a few weeks, that the apprehension and excitement I feel approaching the door of Circus Warehouse would fade as I got used to my training. It really hasn't--every day I'm nervous about my performance, and hardly ready for the exhaustion that I know follows every session. Why do I keep going, then? Easy. The satisfaction after every workout is like nothing I've felt before. And working out in a facility surrounded by some of the most talented circus professionals in the world is not something I could ever pass up.

I knew there were two approaches I could take to my training. The first, the one I did not do, would have been to focus in what I thought I was good at and only take classes relating directly to that focus. My focus would have been partner acro, the circus thing I have experience in. Instead, I decided to take a menagerie of classes so I could learn a little bit of everything from all of the masters. This way, I am learning the basics for four different aerial apparatuses and something like five other skills. My goal was to increase my strength and expand my physical vocabulary. Since I had nothing to prove in any of my beginner classes, I was actually less hard on myself than usual. Everything I could do I treated as a win, and things I had trouble with I let slide and made a mental note to practice on my own.

I created my weekly schedule of classes. As you can see, I really am doing a little bit of (almost) everything:

On Sundays, my rest day, my body feels really weird and doesn't know what to do with itself. Usually Mondays and Fridays I also go in to work out independently, or work on acro balance skills with a partner. So in total, every week this month, I complete 12 one- to two-hour workouts over 6 days. Alright.

My conditioning instructor told us today, after an hour of class, to go write down all of the exercises we did immediately. "The ones you remember first," he said, "are the ones you hated most. Make those your goal for the week." Well, the first exercise that came to my mind was one I'd barely been able to do at all, let alone 25 reps of them. So the plan is to be able to do two--maybe even just one proper one--by the end of the week. Training here is humbling, to say the least. 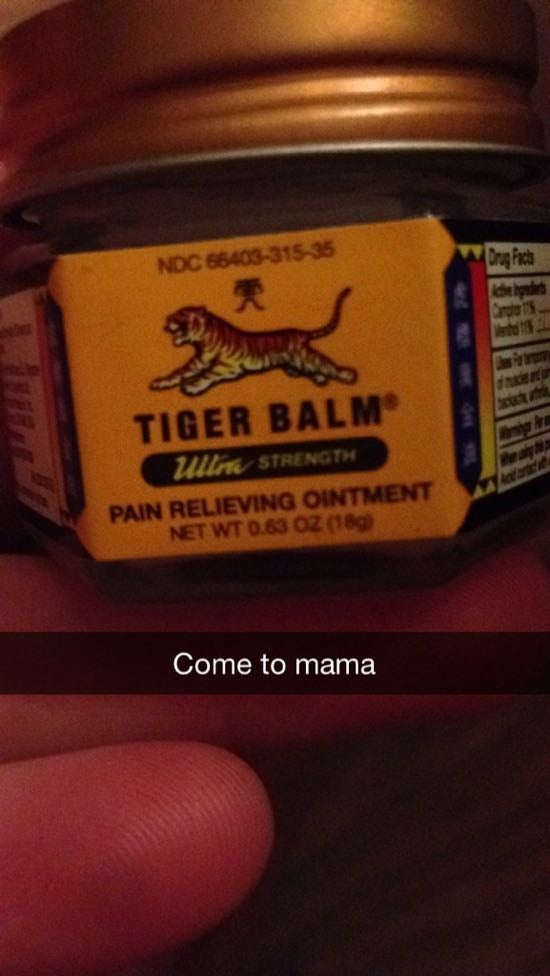 A snapchat I sent after my first day of training. It's real.

I'm in the middle of week three and have mixed feelings about my level of strength. On one hand (not literally, still working on my regular handstand before I attempt a one-handed), I feel weak compared to those around me, and feel like I can barely perform the basic levels of skills I thought I could do. On the other hand, every day I surprise myself with something I can do. Today my handstand push-ups were actually much more coordinated and solid than last week, and I felt like I had made a breakthrough as I pushed my own weight away from the floor in direct contrast with gravity's plans for my arms. Yesterday, I did a back flip on the trampoline. The day before that I successfully learned a double footlock in my silks class, even though I thought my forearms were going to fall off before even starting to climb. So I am learning things, and getting extremely strong, but I probably won't recognize that reality until I'm back at the gym in Oberlin and think about where I was back in December.

If building strength was my goal for this winter term, I can't deny that I've met it. Skill, ability, and endurance may be about the numbers, but strength is not necessarily. My goal was not to get to fifty push-ups, nor was it to be able to perform a five-minute silks routine, or to hold a handstand for thirty seconds. My goal was to get stronger, and that I have done. And these are notes from the midpoint of week three. By the end of week four, who knows, I could be Wonder Woman. Unrealistic, but I said "could be." Really, I am surrounded by wonder-people here at Warehouse. I have no idea why I am even eligible to be in the same room as these people. I watch them train and have to remind myself to close my mouth when it's hanging open for too long. Learning from everyone is an honor. It's worth every single bruise. 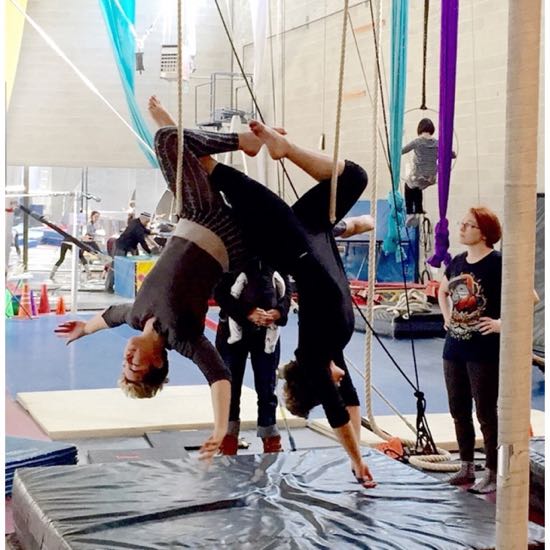 My partner and I learning some duo trap!