First off, a little primer - In comedy improv, we have terms we throw around a lot. For those of you who don't know about them, here's a little lesson.

Scene - pretty easy. Roughly the same as a 'scene' in a play, these can be really short (15 seconds or less, a 'blackout' scene) or longer (10 minutes or more) stories acted out on stage. Involve one or usually more characters playing out some narrative.

Rules - any restrictions or guidelines one uses while improvising. If I told you that you and your partner were going to do a scene, but both of you had to use at least three different accents during the scene, those would be your rules. "Rules" can also refer to the 'Rules of Improv,' which everyone disagrees on, but boil down to three basics:

A Game - an exercise that involves any number of rules. On Whose Line Is It Anyway?, the cast of four play five-minute games, one after another, for 20 minutes. Some favorites: Freeze Tag, Why Were You Late, Boris, Expert. There are a million games. People are inventing new ones all the time, too. 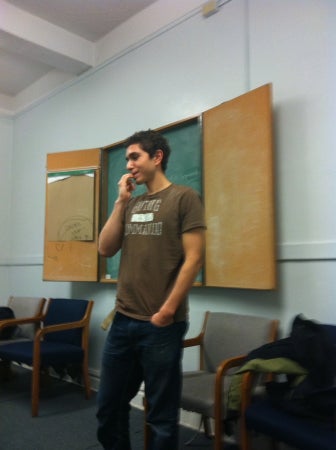 There are great moments in improv. There are more of them if you have really good people, and I think we do have really good people in our group. However, when you practice together three hours a week and perform only 45 minutes a month, a lot of the magic times happen in practice. I wish more people got to see the really wild ones. After we've been warmed up for a while and maybe we're getting a little tired or bored, we start to get silly and do things that we might not do first thing in rehearsal and taking bigger risks in scenes. The result often falls into one of these categories: a very zany, crazy, largely physical scene; a small, earnest, terrifically funny scene; or occasionally a dark, ironic, and possibly uneasy scene. After some of the latter kind, you're not sure how to feel leaving the somewhat scary 'world' you've just created. I get up off of Matt's lap, there's guilt and often a little weird silence, and someone will say "Jesus, what was that?" and we'll move on to something sunnier. 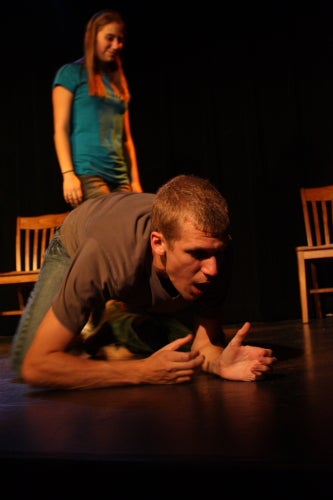 Lexie told me that the floor would get bigger if I put my face
really close to it. She wasn't lying! (Photo credit: Ben Garfinkel)

I'm finding it to be truer and truer that we must improvise the same kind of scenes over and over again in order to get better at them. It seems like this would get terrifically boring terrifically quickly, and I first thought that it might. After all, the point of improv is to be very funny, very spontaneous, and very crazy. That's what people say when they see a really good improv set - "Those guys are crazy! They'll do anything!" Maybe, maybe not. I won't eat cottage cheese. By playing the same games over and over again until you get sick of them, you start to look for ways to play with things you've said before, the rules of the game itself, other people in the scene, anything you can play with to keep things from getting stale. The tamer, funny things have almost all been said, so you look for more obscure ways to go with it. When you play the game in front of an audience, it looks like you are incredibly clever, when in fact you may be doing all the things you had to do in practice to keep yourself from getting bored. 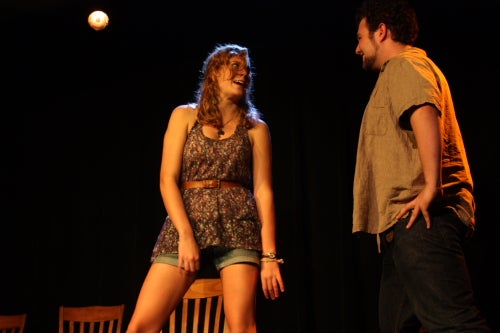 Megan was really angry when this picture was taken because her
bangs were almost as long as her blouse! (Photo credit: Ben Garfinkel)

There is a game called "World's Worst" that we have played as a group for a very long time. The group lines up at the back of the stage, a 'caller' steps out in front of the group, and says 'Obehave! will now give examples of the world's worst _____' . Jobs are a popular subject, like the world's worst surgeon or the world's worst president. While you might imagine that a group of seven comedians would jump at the opportunity to impersonate the 'world's worst dentist,' there are sometimes pauses when the category is called because we all know exactly what to do to get the easiest laugh, the dumbest and most obvious thing to do, but all of us also know that it would cheapen the set as a whole, and that there is something deeper and cleverer and truer in there. A bad dentist, most obviously, would be one that is either very bad at dentistry, and shouldn't be charging for it, or one that takes pleasure in giving people pain. Can you get really specific about how the dentist is really a terrible dentist or about his masochism? What else? What could a parallel be between a bad dentist and a touchy-feely new age guru, a spouse, a car mechanic? Maybe he wants to use herbal tea to treat your cavities, maybe he gets to the operating room and has a headache and 'doesn't feel like it tonight,' maybe she tries to talk you into platinum caps, because, sure, it costs a little more, but the bite is a little more luxurious. In the end, I think we do better by looking a little deeper. 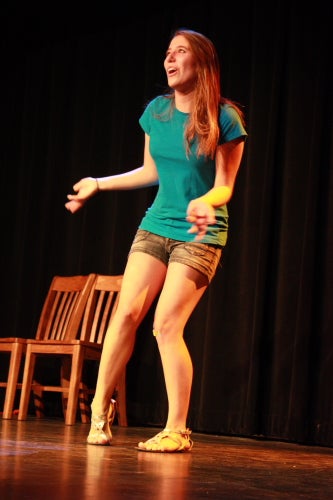 Lexie, spitting from the top of the dome. As usual. (Photo Credit: Ben Garfinkel)

Two weekends ago, Obehave! put on a show unlike the ones we've done in the past. We split the one group into two, each with 3 people, and had them compete in the incredible "Obehave! presents: The Ultimate Showdown." I played the role of the ref, the arbiter between two warring factions, and also kept track of the score. It was different from our previous shows where we mixed everybody together and didn't have much of a structure beside a list of games that we played one after another after another. The added element of competition gave us an extra incentive to go into hyper-good improv mode, and the show (as far as we could tell) was better than many of our previous ones. If you have thirty minutes to spare and want to watch some competitive improv, Oberlin-style, the video is being kept here. 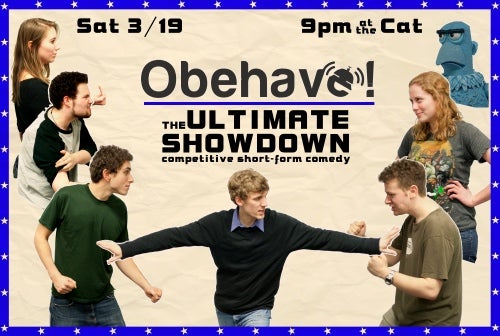 Obehave! took off at the beginning of Spring Break in a big van to go to Chicago together, for the first ever Obehave! Chicago Improv Intensive, a month's worth of improv packed into about five days, wherein we will be seeing professional shows, attending master classes, and performing in the Windy City. As of right now, the plan is to house all of us somehow in an incredibly generous Oberlin alum's house (he's got a pool! This is going to be great) and eat whatever we can get our hands on. Should be tons of fun. The coolest thing about it is that we aren't paying our own money to see the shows, to travel, or to pay for master classes. The Leadership and Creativity Project gave us a grant, and whatever we spend on improv-related stuff they will reimburse us for. Hopefully, we can take what we learn in Chicago and apply it to making our troupe better, improving the Oberlin College Improv Conference, and getting more people involved in improv through the ExCo Greg and I teach each semester. Plus the whole thing is going to be fun as hell. Look for updates in the next few days, I'll check in whenever I have some spare time.

That's one of my favorite OBehave posters of all time.

I can't wait see what sort of crazy/wonderful things you guys learn in Chi-town.

Also, curse you for both linking to the OBehave show I missed (which means I've now rewatched several shows I was present at, too) and to the bazillions of improv games. I want to play!

Happened in Scouts all the time. It's a good way to work on different acting techniques, I think--but yeah, creepiness is a factor for sure.

I missed the showdown! There was--something going on... I don't remember what now... Phooey.

More about my work at the museum.