The experience of the haircut was unquestionably lovely. Laura Shriver, my friend who I enlisted to help me slay this particular dragon, is an amazingly talented cutter of hair. We chatted about shorter showers and how nice it is to feel the breeze on your neck while she filled a take-out bag with what felt like three pounds of my hair. I loved the end result, and we're going to give my old hair to Resource Conservation Team, who is going to give it to an organization that uses hair to help clean up oil spills. Everybody wins! 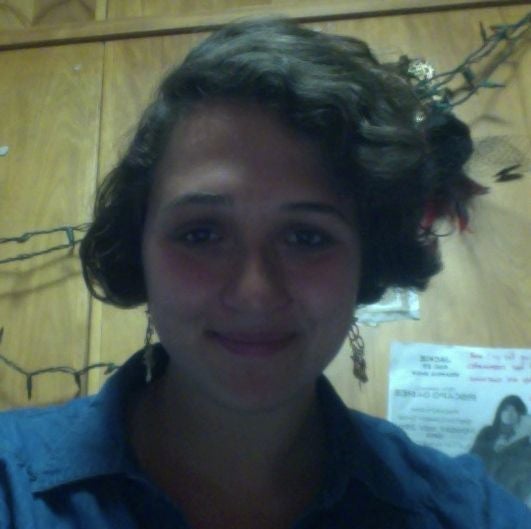 The decision to abandon long hair took a while to make, and many factors went into it. And because I've been so graciously given this online soapbox, we're going on a trip down memory lane. It's been a long and strange road to the haircut I have now, and on the way I've learned a lot about my world, my campus, and myself.

For most of my childhood, I had short hair. This was my decision; boys were the main characters of nearly all the adventure stories I read, so I figured having short hair was a good step in the right direction. My appearance-based choices pretty much all had to do what I was into reading at that time. When I was five, I didn't have much choice over my hairstyle, but I ran around in dresses day in and day out and wanted to be a princess. I got over Disney once I realized that I was too loud, too argumentative, and too disinterested in waiting in towers. It was Harry Potter for Halloween when I was seven, and Prince Caspian the year after that. All I really knew about style was that I wanted to look like my heroes.

I wish I could say that I learned quickly, realized that the reason there were more boys as the heroes of adventure stories was because of institutionalized sexism rather than because boys were better at adventures and grew my hair out as a feminist statement, but it isn't true. My first stab at long hair had a simple, primal motivation: to fit in. I was 11, just having moved from a 300-person elementary school to a 1000-person middle school. I looked around on the first day, the way a deer might look around if she had wandered into a room full of headlights, and noticed that most of the people who presented as female had long hair. Mine stayed long for the next nine years.

Sure, there were changes. I bobbed after my sophomore and senior years of high school, both fairly crossroads-y times in my life. I came to Oberlin with mid-length hair, hair that I treated more or less like a force of nature: you wake up with it in the morning and you see how much of the crisis you can manage.

Oberlin completely changed my perceptions about what you can do with the strands of protein that grow out of your head. When we were visiting colleges, my mom liked to talk about the "purple hair factor": the idea that on my ideal college campus, not everyone would look like they came right off the same young-professional conveyor belt. At Oberlin, "purple hair factor" is often literal. As someone whose biggest hairstyle choice was how recently scissors had taken a few inches off, I was amazed by the amount of hairstyles I saw: dyed, buzzed, asymmetrical, and a thousand combinations in between.

Over the course of my time here, I've learned that hair is much more complicated than what it looks like on the outside. As a cisgender white women, it's important to acknowledge that I come to this conversation from a place of extreme privilege. When you Google the word "beauty," images of people who look like they are the same race and gender as me are the extreme majority. I have benefitted in many ways from looking the way that I do.

But although I fit the demographics of the Western beauty standard, I have never felt close to it. At times, my hair has indeed been a part of that. People always used to tell me "Have you ever straightened it? It would look so good straight" in tones that suggested that they thought it was a compliment. Hairdressers who are not my friends have a history of thinning my hair out without asking, assuming that I want it to take up less space. So, in the same way I learned that most action heroes have short hair, I learned that princesses don't have frizz. Princesses have waves that don't stand straight up in the morning. Princesses have hair that behaves.

And princesses don't wear a size 12. In a country when 40% of 9- and 10-year-old girls have tried to lose weight, it's not surprising that my body has often felt like a closed door barring me from the word "beautiful." That hasn't changed at Oberlin; although there are people of a lot of different sizes on this campus, I sometimes still feel like I'm surrounded by bodies that don't look like mine. I've come a long way since middle school, but I still sometimes used to feel like my long hair was a concession towards fitting in, like it could erase the too big, too loud that made me unfeminine.

I am grateful that I now get to put that sentence in the past tense. This campus has given me my moments of insecurity, but it has also educated and inspired me so much. There are so many people of all races, gender identities, and styles expressing themselves unapologetically all around me, and I'm trying to teach myself to follow their example. I am learning that as long as I never limit the space of others, I am entitled to every inch of space that I take up. Right now, I feel happier with short hair - but that doesn't mean long hair is worse, or that I couldn't go back to it for completely valid reasons. I don't associate short hair with Harry Potter or Prince Caspian anymore: it's my mom, Andrea Gibson, Kye Allums, so many of my friends who identify as and embody a million different wonderful things. We do not need anyone's permission to live and look the way that we do. The best way to be like our heroes is not to look like them, but to act like them.

I was nodding along in agreement to the whole start of your post — medium length hair has been my 'do of choice for almost all the time that I've made decisions about my hair, and I like it that way — but then I got to your last few paragraphs about standards and beauty and HEROES and I was grinning and nodding like crazy. Yes! It really excites me to read about personal embodiments of beauty not as definitions of the politicized norm but as personal journeys I JUST LOVE IT.