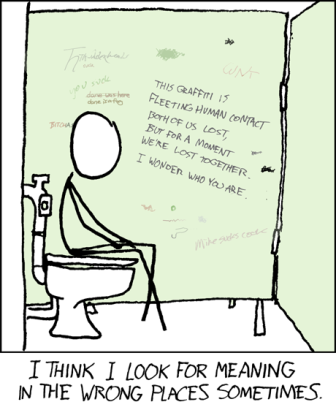 This is from xkcd--credit where it's due.

Winter Term progresses steadily here in Washington State. I've been keeping busy, doing some babysitting, hanging out with my family, watching and making schemes around Glee (check out my plot to bring the show to campus), and so on. Mostly, however, I've been transcribing, counting, and making theories about bathroom graffiti.

So what am I really up to here? Bathroom graffiti is an interesting oddity, but surely not worthy of any semi-serious study, right? Wrong! There's a branch of folklore--folklore being the middle ground of study between English and Sociology--devoted entirely to the study of what we write on restroom walls. Latrinalia is the fancy term for it. (Same root as latrine, obviously.) It's a cool subject, once you get into it, though you must be prepared for it to get vulgar. 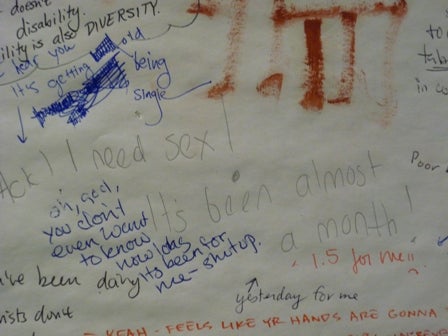 Here's what I did:

I went to Oberlin, Reed, and the University of Puget Sound, three different private liberal arts colleges (I wanted to make it more, and will hopefully do one more, if time allows). At each, I took photographs of latrinalia in the bathrooms in their libraries, dining halls, and student union buildings--areas that should attract lots of people in a broad cross-section of the student body. I only went in women's bathrooms, because that was easier for a number of reasons. If I ever go back and expand on this, though, I'd like to do cross-gender comparisons; that would be fascinating. 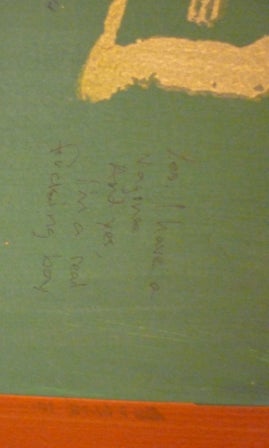 Once I had the pictures, I spent a (long!) time transcribing all the graffiti I could make out, preserving misspellings, wrong punctuation, and random capitalization. Some of it, of course, I just couldn't read; it was illegible, written over, or too faint--for the record, pencil on bathroom wall is not an effective medium. By indenting replies, I organized the graffiti (it's plural, by the way; the singular is "graffito") so that I could follow the flow of the "conversations" that developed. 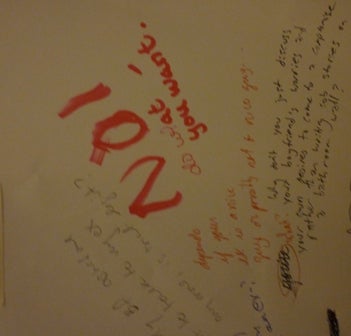 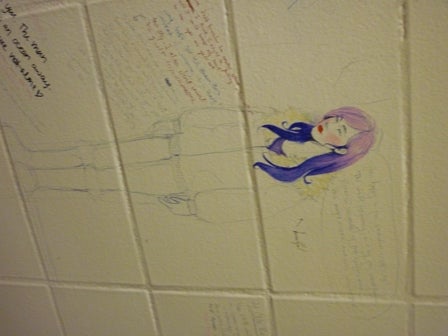 I also went through the replies and counted up which ones were "positive" (supportive/reinforced previous statement, "me too," answered a question, etc.), "neutral" (asked a question, provided more information with value judgment implied), "negative" (expressed a contradictory view, disparaged a previous statement, sarcastic), and "?" (couldn't tell if it was sarcastic or not, original statement and/or reply was illegible, etc.). 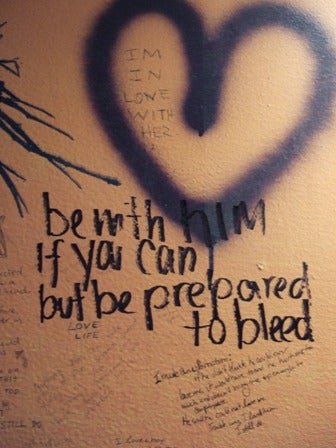 I want to shed some light on what drives people to write on bathroom walls. I'm looking for common themes in bathroom graffiti, which subjects seem to get the most replies, and what people ask when they deliberately ask for a response, as happens frequently. One of the theses I read as research suggests it's a form of confessional and a safe, anonymous place to vent, request advice, or be honest without the constraints of social oversight. In other words, you participate in a special social connection, even though you're alone on the toilet. 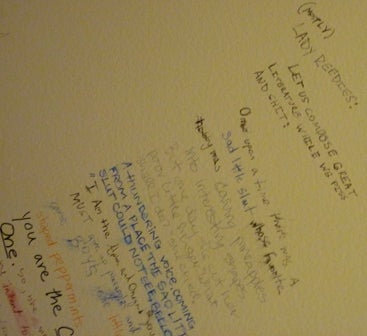 This was VERY LONG--26 installments, and still not over!

A pattern that interests me, found several times at Reed, is an expression of isolation or loneliness followed by "me too" statements. Here's the best example.

Why is everyone so nice & helpful in here, on paper, but out there, everybody's so dammed mean, & never makes any effort to make friends, or even eye-contact for that matter? --A lonely Reedie

b/c they're dumbasses. We should all be friendly when we (?).

beyond the fact that some people are real dick-heads/assholes I think a lot of it has to do w/ two categories of things. 1) stress + time available  in the bathroom we all have the time that we're on the toilet to be nice + to avoid thinking about work. 2) The fact that the atmosphere at Reed makes it hard to make friends gets people caught in the loop of not making friends due to ripped off and therefore the atmosphere being one of not making new friends...Everyone is afraid of rejection, and it takes a lot ripped off maintain fun, healthy relationships. Thus, if you are lonely, just try your hardest to start talk ripped off because they are probably to scared and busy to start the process of making ripped off

Written over this: please don't ask me (now?)

This could be in reply to "please don't ask me" or to the longer one--the arrow to the reply isn't clear I agree, I think it's the way you approach people that constructs the relationship, not the essence of the other . . Although that doesn't sound very nice, it's meant to be positive ...less fatalistic than the "everyone's an asshole" thesis...

I am a stupid bitch in person AND on paper! Very consistent!

SUPER NICE GIRLS TO GET TO KNOW LIST {followed by seven names--or rather, six names and "ME!"}

What about that (name) girl? Bitch or Hottie?

Elsewhere, there is an illegible first statement, then:

OKAY--so how do you "get sociAl" if you're 1) extremely shy 2) parties freak you out 3) your friends will all have graduAted/left PortlAnd & it's yr last yr At Reed Look for other people like you--there are a lot of them. I wish I could tell you how to identify them . . . probly sitting alone studying in the SU . . .

Hey, that's exactly my story too! If you ever do want to be social, visit thesis desk 25 & we'll get coffee or beer (I am kinda lonely)

Thanks! I will. Smiley face And I think this is a good Idea too. Arrow to next reply

I'm not really shy but I would like to make a new friend. Maybe all of us interested in starting new friendships could meet & do something fun, together?

Here, we have hints of a connection transcending the bathroom. I'd love to know if these people ever actually met in real life.

Also, here's something interesting about a trend at Oberlin. People put up informational stickers at Oberlin, which I haven't seen done elsewhere ("Give Oberlin a Peace and Conflict Studies Concentration," facts about reproductive health and abortion, statistics about energy use at Oberlin and where it comes from, and so on). While replies are generally pretty positive when they're replies to what I call "original" graffiti, the replies to half the stickers are negative! This could indicate that people are supportive of people but ready and willing to tear down anything less human. The stickers are more authoritarian, not fellow rebels in wall-writing. 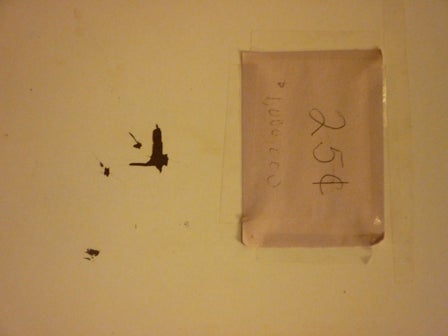 Humorous subversion of the tampon machine!

One sticker defines allyship: "recognizes his/her/hir own privilege as a member of the dominant group" Under this: and then what?

And what do people think of all this? 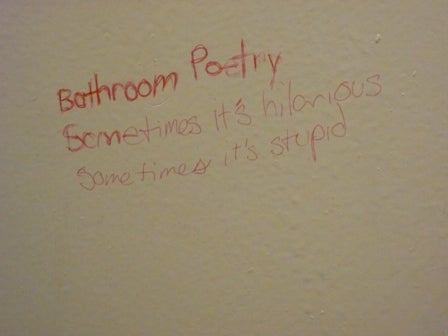 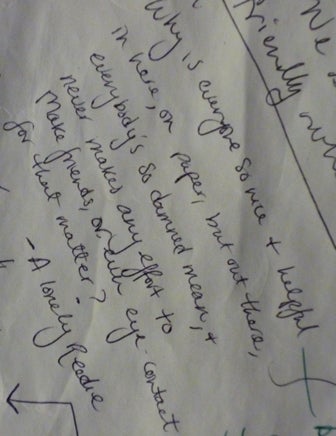 My god, I'm falling in love with the most unlikely people today!

There's a wall in the Reed Student Union covered in "I love..." and then a description of who or what is loved. A sample:

I love a boy who's as crazy as I am

I love a boy who's definitely crazy than me

I MISS YOU Love, SUMMER the loneliest season

He loves me And I love him but illegible

I love my job

I LOVE A BOY WHO GIVES ME LOVIN' IN THE MORNING

Me too. Morning sex fucking rocks

I love a girl

I do not want to be in love

Me either I just illegible

I'm in love with a girl who loves me as much as she could ever love any one. What if this isn't enough?

Been there. For months.

ADVICE FROM AN ALUM: All these boys (or girls) that you're secretly crushing on right now (but maybe freaking out about approaching) APPROACH THEM--SEDUCE THEM--RISK EVERYTHING--(even the potential embarrassment of being rejected) BECAUSE IF YOU DON'T THE FANTASY OF WHAT MIGHT HAVE BEEN WILL HAUNT YOU FOR EVER... ONE LIFE ONE CHANCE

WORD--YEARS LATER I FIND OUT ALL MY BEST UNREQUITED CRUSHES TOTALLY, IN FACT, FELT THE SAME ABOUT ME. DARE. 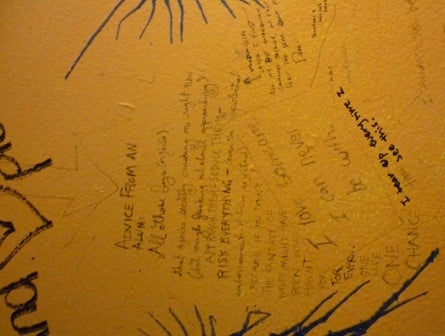 Thanks I think I shall

"Life isn't a garden, so stop being a ho." --Mother Theresa

What if life was like a video game Would you kill Every one then Waited wait for them to be revived and kill them again? ~Riva comments

I think I would be content to run around my (??) world, never getting hungry or fatigued, until eventually going mad from the ever-repeating scenery and my own inescapable theme music.
A world without real cake is a world not worth living in
How different is the post-modern world of simulacra from a video game?
An arrow goes from the original one to this, in the same pen and writing as the original: I'm loving the imagination but I'm only talking about murder being like the video games. not the scenery, not food, haha not theme music, Just good old fashioned video game murder...
Honestly, I think I would be bothered by the fact that they never actually die.
Sounds like y'all have a lot of hate, & not a lot of appreciation for the beauty of the imperfect reality.
Arrow from above to this Theres nothing beautiful about video games where you kill people
Also, your scenario postulated that there would be people we hate. 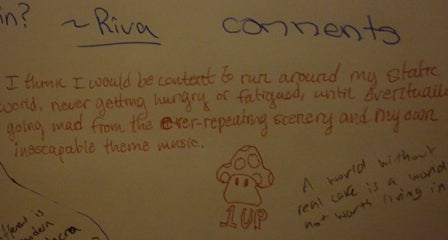 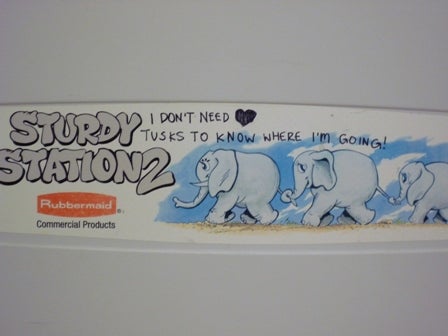 The third piece of graffiti was the same commentary on the elephants on another changing table. Either those bathrooms were recently painted or UPS students are very well-behaved, or both!

So interesting! I've seen some of the loveliest, most positive graffiti in the Peters women's bathroom. Some others, though, remind of Obie Talk on a bad day. I tend to think whoever starts writing sets a trend.

Glad you like it! Hmm, I don't think I've ever been in the Peters bathroom...I'll have to pay it a visit when I get back. :)

You obviously need to go into all the Harkness bathrooms... I quoted a graffiti conversation in my FYS class forever ago. It's still there, probably with a few more additions now.

The ground floor Peters bathroom has some fascinating graffiti too. Check out this and this.

Brilliant. I obviously need to make a tour of all the bathrooms on campus I have not yet visited. Hmm, that'd be an interesting addition to the usual prospie-tour . . . ;)

This is way cool.

Seconded. Though maybe you should censor out the names, so this graffiti about specific people doesn't become Google-able?

I've studied latrinalia for the first time a couple months ago. I was skipping school to go to the library (weird right?) in downtown Los Angeles and I saw stuff like this. I jotted it down. It was fascinating.
some things I saw:
‘We can breathe in outer space They just don't want us to.’
‘The birds in the sky fly higher than kites But they're really not higher than me’
‘People build walls not to keep us out but to see who cares enough to break it down’
‘I love Sergio’
and my favorite:
‘You are so much better than all this shit’
I wonder what I'll come across when I go off to college in a couple months.

Awesome project! I recognize all the Reed latrinalia and I even contributed to the 26 installment bathroom epic. I hope you get a chance to visit the men's restrooms, I would love to see a comparison.