My favorite thing about being in OCSA this year was the opportunity to cook. Both semesters, I was a head chef in Tank, meaning I was in charge of executing one meal a week. Every Monday evening I planned and cooked dinner for 80 people, with help from two other co-opers, while making sure all kitchen safety standards and different nutritional needs were met.

I loved opening the produce fridges and solving the puzzle of "what to make this week." Sometimes there was a cornucopia of fresh veggies, and planning was simple. Other times were not so easy, i.e. the first day back from spring break when there were three lonely heads of cabbage.

For me, cooking was super rewarding. Although stressful sometimes, being a head chef used a very different part of my brain than schoolwork, and for that reason was always a welcome break from my normal academic routine. Every week I challenged myself to make something new, and I loved the adrenaline rush I got from pulling off something tricky at the last minute. I must say, I was quite proud of the 80 individual sweet potato pies I made for my last meal at Tank. 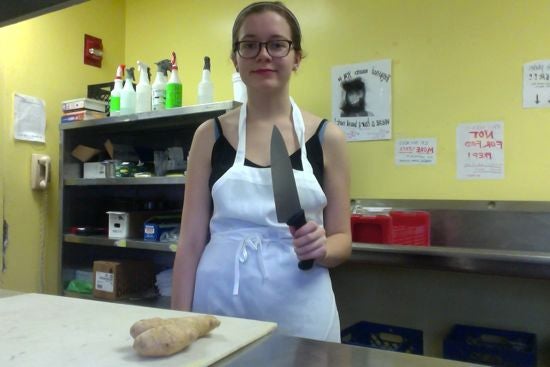 About to dice that ginger like it's my freaking job!!!

After the year ended, I felt like cooking had become one of my stronger skills, and I wanted to continue developing them by working in an actual restaurant kitchen. However, for someone with no formal culinary training or previous experience in a restaurant, finding such an opportunity was tough. So when I turned over my resume, which included my OSCA experience, to a Nepali restaurant seeking a hostess, I was shocked and thrilled when they said they could use extra help in the kitchen, as long as I was still willing to be a hostess some nights.

If I thought I was pretty good at cooking, BOY was I humbled by my first shift working in the kitchen. Nervous and eager to please I started off chopping onions, and while I've spent plenty of time crying in the co-op kitchen, I had never used knives this sharp before. So naturally, 15 minutes in, I lost control of the knife and sliced through my fingernail. After flinging blood all over the knife, the onions, and the floor, I ran downstairs to the party room to faint on some chairs. After I lay horizontal for 20 minutes, I went back upstairs, cleaned up my butchered finger, and started peeling potatoes.

I probably should have gone home because I was so faint from pain and blood loss, but after heroically finishing the potatoes without passing out again, I was told to prepare dinner for the cooks and wait staff, 15 people in all. This was definitely a test, and oh my god it was maybe the scariest thing I've ever done.

So then I was running around an unfamiliar kitchen with very specialized Nepali ingredients, having private freak-outs in the walk-in cooler, trying to make a ginger chicken stir-fry without my finger once more spewing blood everywhere. I then had the pleasure of watching every single cook taste my finished stir-fry in front of me and the rest of the kitchen and front of house staff (the marinade was praised, but the chicken overdone). It must have passed muster, because I was asked to come back to the kitchen the next day.

A restaurant kitchen is an entirely different world. Coming from OSCA, where the majority of co-opers looked like me, I was suddenly the only woman, white person, and cook under the age of 40. I wish I could say I proved myself as being a tough-as-nails lady, able to withstand the heat of the kitchen, but instead I was drowned in my too-big cook's uniform, and usually too weak to lift the giant pots and pans without help. However, despite how out of place I looked, and how hilariously under-qualified I was (OSCA cooking very different from restaurant cooking), I have never felt more immediately accepted into a work place. I experienced saint-like patience from the other cooks as I learned the basics of kitchen operations, had long talks with the executive chef about Latin American politics, and got to make all the cool Indian and Nepali appetizers.

The wait-staff were all Nepalese, and the cooks from Ecuador, which meant I spoke exclusively Spanish in the kitchen, and learned Nepali terminology while hostessing. It wasn't unusual to hear a blend of Spanish, Nepali, and English, which everyone on staff spoke a little bit of. For example, I would be instructed "Esther, pon el kheer (rice dessert) en el cooler grande." 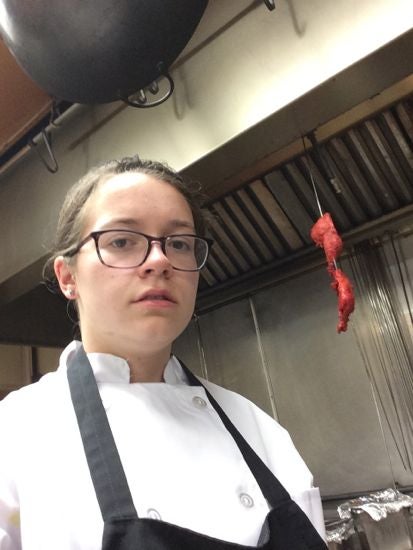 While I really loved getting to know my awesome co-workers and learning constantly, cooking professionally is unbelievably hard. In comparison to the actual-adult-real-life cooks, I had way fewer demands, and was still always physically and emotionally drained. I was at the restaurant six days a week, making a nice $8.25 an hour, and would get home every night at 10:30 feeling exhausted. It was tough to see all my friends have well-paying, career-enhancing internships with evenings and weekends off, while I had barely enough time or energy to shower off my curry scent every evening. Even though this summer was tough for many reasons, my 60-hour work week being one of them, I am so grateful to have had this opportunity. Although I only worked at the restaurant a short two months, I left with almost a spiritual connection to the process of chopping onions (crying adds emotion to the food), a forearm covered in grease burns, and serious admiration for those who make a career out of food.