Ratatat, playing at the Sco on Tuesday, was insane.

It's funny to describe it to my friends from home because it sounds so weird. Although the Sco is in the center of campus, in the basement of Wilder Student Union, it feels a million miles away from the rest of campus. When the lights go out, and the day glo goes on, the Sco becomes a weird little wonderland. Though some people do play darts there, or play pool, or just grab something to drink and talk... I can't imagine doing anything but dancing. The center of the Sco faces the stage, with little nooks on the side to shmooze. At the busy concerts, the sides become pockets of breakdancing and contact improv, while the center area becomes an epic moshpit.

There were two starter bands: E-Rock and Panther. I really enjoyed E-Rock - he came in wearing a black cloth over his head, covering his face with big sunglasses and a white bandanna holding it all in pace. He looked like a robber, if not a terrorist. On his arms, he'd drawn robot-style joints and a heart. Overall, an awesome aesthetic. His set was solid electronic dance music. When my Dad asks me what newfangled stuff I listen to, I'd play him a bit of this.
The coolest part? He was an Oberlin student, and because of his costume, I have no clue who he is. Anyone could be E-Rock.

Panther was ... meh. To me, a bit too indulgently indie, but with a solid beat and amazing drummer. The singer seemed like a self-absorbed dweeb- he made his voice echo on nearly every track- still, I danced.

The Sco filled to its sweaty brim as Ratatat set up. I was at the very front for the two openers; by the time Ratatat was ready to go, I was about 4 rows of people in after a bunch of folks pushed ahead of me.

Izzie looked around and said, "Guys, we're gonna get crushed," a mix of fear and excitement in her voice. The dance floor filled more and more.

The instant Ratatat started, the crowd became a huge, amorphous organism. We swelled, we danced, we jumped, we moshed. The Sco workers moved to the head of the stage and pushed the crowd back, away from the equipment.

Despite the claustrophobia, the crowd was really pleasant, all of us swaying in the sweaty human ocean. Sweaty isn't the right word, but it approached the soaked-ness that described the whole audience.

On the walk home, my sweat-engulfed dancing dress became a cold sheath. The beat to Seventeen stuck in my head as I slept. 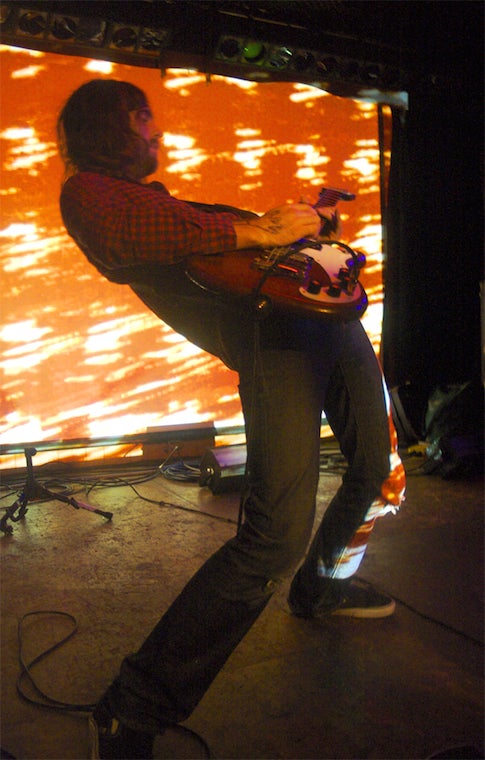