Hi, my name is Ida, and I've been tumbling for six months now. It's a problem. I go to tumbling club instead of going to things like fascinating lectures, shows, concerts, concerts that my friends are in (sorry, guys!), and all manner of incredibly fun social events - but I feel no regret! I can't stop talking about tumbling; I take the prospies I host with me to meetings, I've talked almost all of my unsuspecting friends into coming with me at least once, and I've definitely recommended it to strangers on more than one occasion. As my roommate (who got hooked on it thanks to me) exclaimed the other night: "tumbling is addicting!" Yes. Yes, it is.

Two tumbling club meetings a week used to be enough to satisfy my cravings. Then I found that I could parasitically attach myself to the OCircus skillshares and co-opt their gatherings for tumbling purposes, and my greedy little tumbling limbs have been unable to stay away ever since. Skillshares are really supposed to be a part of TGIF, and they're supposed to be for OCircus members to teach other people how to juggle, walk on pogo stilts, and fight with staves, but I don't go to there to do these things. I go so that I can, selfishly, tumble. Please get your poi off of the mats so I can try another twenty backbend kickovers. Thank you. 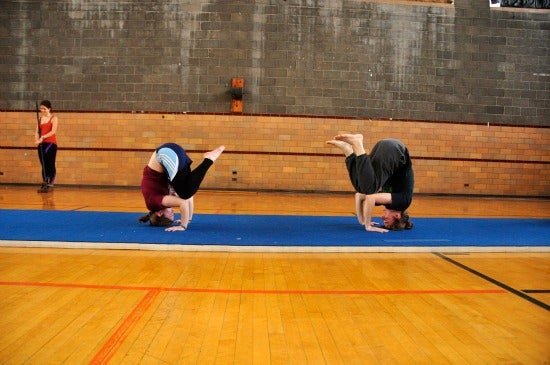 Sometimes I also tumble with my roommate. We are goofy. Photo cred: Will Passannante.

In addition to skillshares, I've also wormed my way into actual tumbling shows. Me, with my just-barely-adequate cartwheels and my still-not-quite-landed front flips, I was in the Aerial & Tumbling Spring Showcase earlier this month! Sounds crazy, right? What did I even contribute? Well, I may not have many tricks under my belt, but I am the most eager tumbler there ever was, and that willingness was all I really needed to be included in the group. I still can't entirely wrap my head around it, but I'm super excited. I enjoyed the showcase like crazy. We didn't rehearse terribly much and it wasn't perfect, but it was the most fun I've ever had performing, and that's coming from someone who's been on stages intermittently for more than a decade. It was excellent. Lots of people tumbling together to "Clint Eastwood" by the Gorillaz? Automatic smashing success, I guarantee it. If the show happens to be the same night as Drag Ball and your audience shows up in drag, so much the better. (My roommate and I classed up the act with some bow ties.) 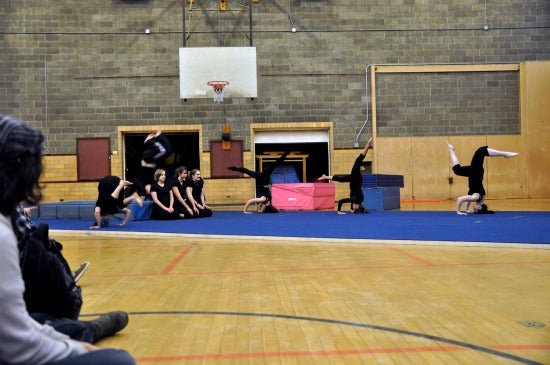 We put on our best gangsta faces and dive rolled over each other. That's me clearing the three seated tumblers. Photo cred for this and every following picture: Ma'ayan Plaut.

There were other tumbling acts in the showcase as well; some more experienced gymnasts paired up and beasted through partner acrobatics routines. I always feel inadequate and inspired at the same time, watching them land sick moves on the mats. 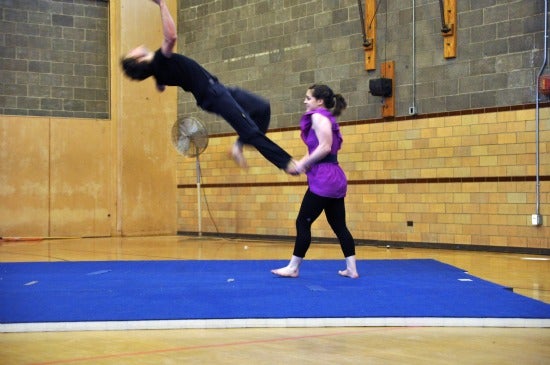 These two unbelievable people are Julie and Ben, who have been doing gymnastics and tricking, respectively, for many years now. I stand in awe of their skills.

Of course, the aerialists also blew their half of the show out of the water. They train in the same space and at the same time as us, so there's quite a bit of crossover between our groups. Unfortunately, they won't let just anyone up in the air (you have to have at least 30 hours of training from somewhere outside of Oberlin first, due to liability concerns), so I haven't tried my hand at it. Yet. 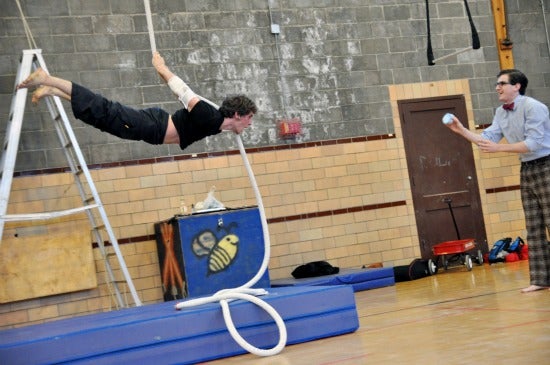 Ben again, reaching for that can of tuna like it's the love of his life and also somehow completing a spectacular corde lisse routine. 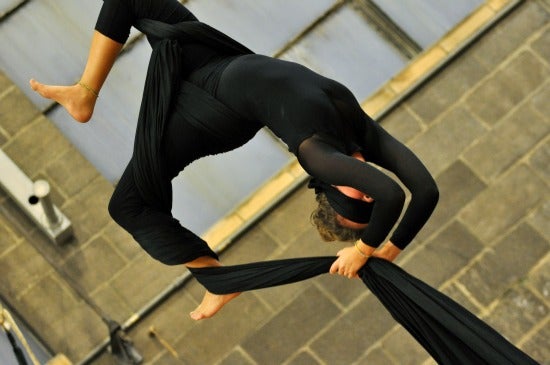 Meet Clara. Clara is upside down and blindfolded. Hi, Clara!

Being the vessel of insatiable tumbling hunger that I am, I immediately signed up to be in the OCircus Spring Show after the showcase was done. I thought to myself, A circus show that is time-travel-themed? A spot in said show, just for me, that involves dressing up like a Viking and roaring copiously? Goodness me, is it my birthday? and then I died of excitement. Seriously, I would rep this club on a street corner, new-earth fundamentalist style, with a sandwich board and a megaphone if I had to. The fact that my job is to learn choreography for an epic Viking tumbling battle and perform it with a bunch of friends multiple times basically makes me the happiest person ever.

I admit that I've had to make some sacrifices along the way, thanks to Tech Week, which is an unpleasant but necessary part of putting on a large-scale show. I had two hours of rehearsal Saturday and Sunday, and I've been in rehearsal for five hours every day since then (it's Friday evening as I write this). Everything fun I do after class has been put on hold for an entire week - ExCos, other rehearsals, work, going to shows and concerts, everything. This would be fine, except tech week rehearsals don't actually consist of me tumbling around happily; they consist of me sitting in the bleachers for hours at a time grumpily, waiting for my turn to run the act. Unfortunately, I'm fairly certain that this is the only way to preserve the directors' collective sanity, so I grumble about it, but I do my best not to mind too much. I am in a gym full of amazing circus performers doing homework, running acts, sharing our respective areas of expertise, and bonding over a shared dislike of tech week. It could be worse.

Right now, it is opening night, and I am backstage, suited up in leggings and gauntlets and more makeup than I have ever worn in my life. 'Backstage,' in this case, means 'the hallway next to our performance space,' so my costume has gotten a lot of intense stares from little kids passing by to get in the doors to the gym. The show is running - I can hear the bass for the aerialists' astronaut act blasting. I don't go on until the very end, so I have a lot of down time in which to get pumped up. My fellow tumblers are reading books, knitting, adjusting their costumes, going onstage to perform in different acts, and generally passing the time productively. It's much like being in any other stage production, except slightly more on the wild side - as far as I know, most productions don't involve sixty people running on and offstage, breathless not only from changing in and out of costumes but also from hoisting people on their shoulders and climbing ropes up to the ceiling. It is an exciting undertaking to be a part of. 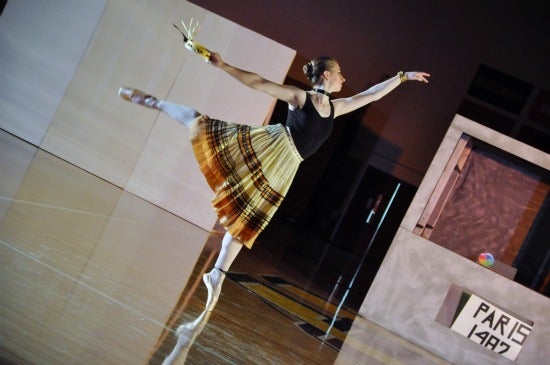 Cristia is a member of tumbling club and is also starting up a ballet club, for obvious reasons. Sorry, did I say Cristia? I meant Esmeralda. Her name is definitely Esmeralda in this act. 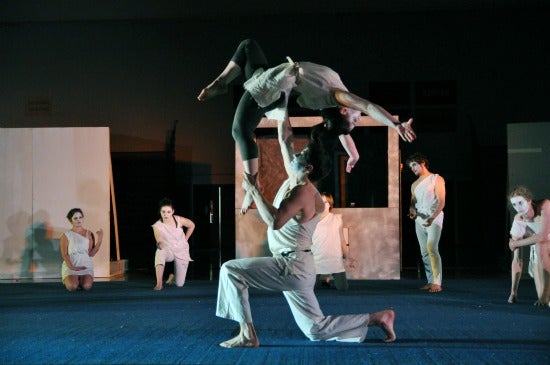 Julie again, this time with Matt (who was the aerialist taunting Ben with tuna in a previous picture). They joined forces to teach the partner acrobatics ExCo that put on this act. 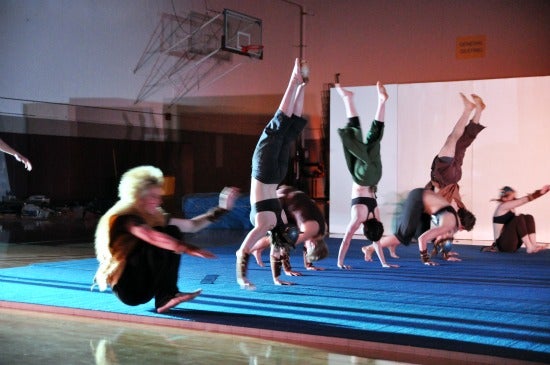 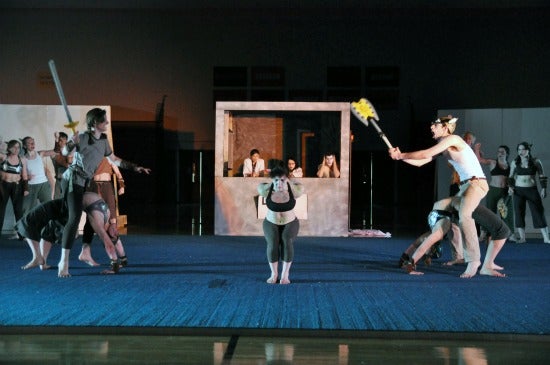 More Vikings! Julie is about to do a backflip between me and Will.

Tomorrow, I'll do the same thing again in the afternoon, and then once more Sunday night. Hopefully, my life will return to normal after that. And by normal I mean "completely and utterly devoted to working on my finals," because that is what comes next. I will enjoy not having to deal with the massive disorganization that this circus (as a student-run endeavor) embodies, but I will also miss being able to look up from my laptop and see my friends rehearsing their five-tier human pyramid or spinning poi to pass the time. Studying just won't be the same without the occasional cry of "Timber!" and thud of an acrobatic balance move gone wrong in the background.

I'll be back next year, OCircus!

Thanks to both you and Alex for nagging us about tumbling all through the first semester until we finally came along. It's a bit like a gateway drug - but instead of addiction and poverty, it's opened doors to fields of awesome.

Ida, this entry makes me want to learn to tumble -- no small accomplishment, since I'm so clumsy I tend to tumble whether I mean to or not. Thanks for the chance to live vicariously through a champion tumbler! I can't wait to come see the next OCircus!

And Will, thank you for the laugh ...

Griff: A champion tumbler?! Don't make me laugh!
But you should absolutely positively accompany me to tumbling next term. Please? It will be lots of fun, I promise!

Also, anyone else reading this who wants in on the tumbling fun, here is a two-for-one deal: find me, and I will take you there, and you will have acquired a friend and a club in one fell swoop!

Ida, I have an intense fear of tumbling. Including handstands, which were recently revealed to be an integral part of a swing-dance arial that I want to do. Will you teach me how to do a handstand successfully? Please? (Asks a 23-year-old professional.)

1. That must be some kind of dance move!
2. I will do everything in my power to teach you pretty handstands, but really you should just face your fear and come to tumbling. (We tumble on soft mats, there's nothing to be afraid of!)

One day, I will *actually* come to tumbling club and hang out and maybe learn things. Probably going to have to be next year at this rate, but yay! Flips and cartwheels and flexibleness for the win!