Dear class of 2017,
As you all doubtless know, you have less than one month before the start of first year orientation aka Camp Oberlin. As endless as the next four weeks may seem, that last month before college passed incredibly quickly for me and was chock full of things to do. Here's my advice on how to spend that limited time.

1. Brace your wallet for the imminent financial blow
Unfortunately, college is expensive. Even if you're not covering tuition costs or doing work study, it's likely that you'll have to start spending a bit more money. That includes the obvious things like textbooks and a laptop1 and less obvious things like toiletries, restaurant bills, and medicine when you inevitably get the first year flu. If you have a job, I recommend taking on a few extra shifts at the very end of the summer to pull in some extra cash. At my summer job tons of sub hours are up for grabs at the end of the summer when college students start going back to school; the same might be true where you work. If you don't have a job, look into getting one in Oberlin before you get to campus or see about getting a less formal job for your last few weeks at home: think lawn mowing or pet sitting.

2. Read for pleasure
I know I've written about how it is indeed possible to read for pleasure in college and I'm not refuting that. What I'm saying is that it's much more difficult to find time to read during the semester than it is when you're at home. Now is the time to read the books that have been at the top of your list for years, to binge on YA novels or to re-read the Harry Potter series again. Just read books that aren't listed on a syllabus while you can and you'll thank yourself later.

3. Don't waste time wishing you were at school...
I've noticed that lot of people tend to get a bit restless or bored in the months leading up to their departure for college. This boredom can lead to almost-college students getting "so tired of this town" and spending time clicking through their college's website (or Facebook page) and moping instead of actually finding things to do at home. I'm not saying you're like that, class of 20172, but I've seen it happen before. It's understandable to get bored on occasion, but don't let that restlessness rule your life. Do your best to stay active, even if this means doing things that might seem unimportant in comparison to your awesome, as-yet-hypothetical college life. Going to a grad party might seem stupid, but what's actually stupid is wasting your entire summer doing nothing. 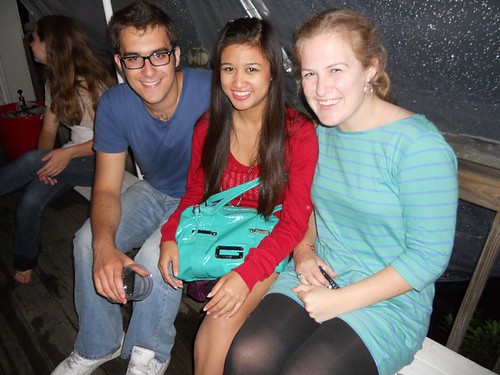 Grad parties are fun, yo.

4. ...when you can hang out with friends instead
Spend as much time with your friends as you can, even if that means just doing nothing with them. Whatever a fun night with your friends means in your group, do it as many times as you can. Watch Aquamarine for the 10th time (don't judge), go to your favorite place to be together, or start a weekly board game night.

In my experience, it just got harder to hang out with my friends after leaving for college, even when I was at home. My friends' families moved away, jobs and internships took my friends to far-off cities during the summer, and our other breaks never really lined up anyway (an unfortunate reality of winter term). Obviously I still see my best friends from home, but it usually takes a certain amount of planning. Use this time when hanging with friends can still be casual and spontaneous wisely.

5. Go on an adventure or two
When I look back on the summer of 2011, some of the most memorable things I did with friends were a bit more adventurous than staying in and watching a movie. I camped out at a local movie theater for the Harry Potter movie premiere with a huge group of friends. 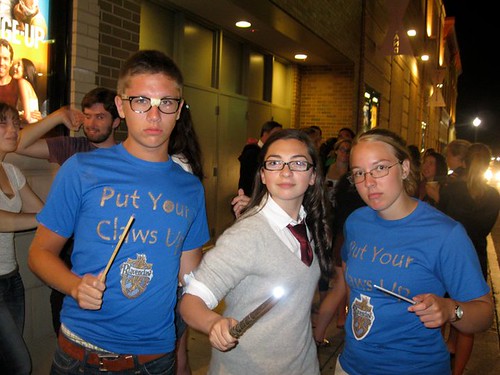 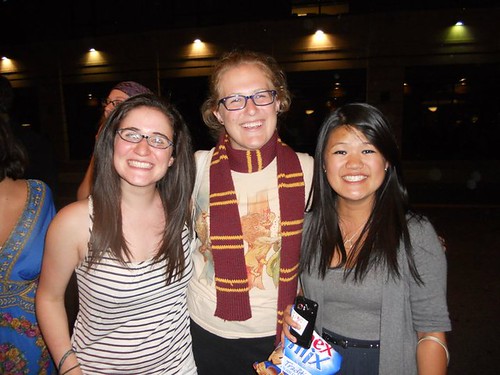 Yes I have a house scarf, no I'm probably not a Gryffindor. At least it's in Oberlin colors.

I was an extra in a major motion picture shot in my hometown with my friends from the school musical (afterwards we went out for Italian just to make it a perfectly Schenectady-themed day). I made a mini-roadtrip of going to three or four grad parties in one day, one of which was at a lake. 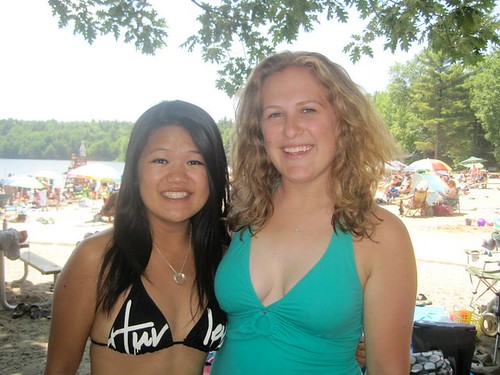 I'll say it again, grad parties are fun, yo.

I highly recommend going on some adventures of your own. Just like Phineas and Ferb, the Tri-State Area is your oyster!

Come to think of it, the phrase "What would Phineas and Ferb do?" should be your guide for the following month, aside from the fact that they're young enough not to need jobs and they have an absurdly long summer vacation (104 days? really?).

6. Don't procrastinate on the practical stuff
This is boring, but it needs to be said; don't wait until the last minute to buy stuff for your dorm and pack for college! I may be a bit biased since the idea of waiting until the last minute to pack for anything makes me very anxious, but in my opinion you cannot procrastinate on packing for college. You have four weeks left (or maybe less if you play a sport) so you have some time before you really need to start picking things up for your dorm, but don't push your trip to Bed Bath and Beyond3/Target/wherever to the last minute. You'll want to set the last few days aside so you can pack in a somewhat rational manner. In my experience, procrastinating on packing causes you to over-pack and to forget important stuff. Spreading the packing out over a few days forces you to really evaluate what you're bringing and gives you more chances to realize that you're forgetting your contact lens case. Another bonus of packing a bit early: you'll have a buffer in case a freak natural disaster occurs the day before you have to leave for Oberlin.4 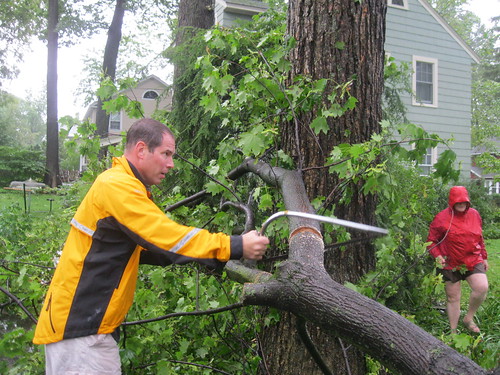 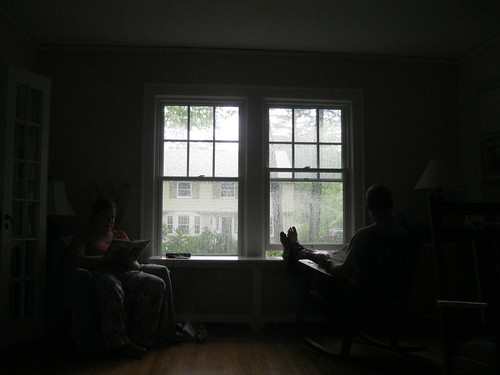 I spent my last day at home dealing with fallen trees in my yard and no power in my house.

And with that, 2017-ers, I leave you (except not really since I'm checking your Facebook page pretty regularly now). I hope your last pre-Oberlin month is a lovely one, and if you have any questions, don't hesitate to ask!

1 The day I bought my laptop was full of conflicting emotions. I was obviously thrilled to have my own computer for the first time, but it was also the most expensive thing I had ever bought and after leaving the Apple store, my bank account was a fraction of its former self. Don't let this knock your bank account out completely.

2 The 2017 Facebook page is actually shockingly non-mopey. Sure, things got a bit dicey there when you guys were waiting for room assignments (I actually got pretty stressed and worried on your behalf, 2017-ers), but mostly, you guys seem ok.

3 I don't mean to endorse one store over another, but Bed Bath and Beyond has this cool promotion where you can go to the store near you and pick out everything you want and then they set it aside at the store nearest to your school. This was excellent for me since my drive to Oberlin involved four people spending 16 hours in a Prius with no room for a ton of dorm stuff. I imagine it might be a good solution for some other 2017-ers as well.

4 Hurricane Irene, which skipped NYC and thus didn't get a lot of media attention, flooded a lot of Upstate New York the day before I left for Oberlin. Most of the new York portion of my drive was on back roads off of back roads and we sat in bumper to bumper traffic for almost six hours. Hence why my drive took 16 hours instead of 9.

Well, laptops at least don't have to be the issue we make them be! With so many work stations all over campus (and 24/7 swipe access to some of them) there's absolutely no need to be forking well over 1k for something like that. Besides, there are smarter ways to obtain a laptop than grabbing a Mac.

Hello, thanks for the great advice. I have a question about lofting, bunking beds or not. and if lofting is preferred, are lofts available for rent at Oberlin? Thanks!

Lori: You're very welcome! It depends on where you'll be living. To quote an answer to a similar question on the Oberlin tumblr "In the newly renovated dormitories (Burton, Noah, Kade, Price, Harvey, Lord, Saunders, Asia House, and Kahn), the furniture is made to loft. The furniture in the remaining dorms usually allow for bunking beds but not for lofting, though you can get bed risers to give you some additional space underneath your bed."

Unfortunately I don't know about where you can buy bed risers since I've always lived in dorms that allow for lofted beds.