Have you ever experienced an Ohio winter? Until last January, I hadn't - I spent my first Winter Term back home student teaching an AP Music Theory class and enjoying the warm weather. For my second year, however, I chose to come back to Oberlin after the holiday break to work on an independent study in German. I figured that I'd get a lot more done back at school than I would sitting around at home for a month; it's also sort of an unspoken rule (or perhaps a strong suggestion with severe social consequences) that every Oberlin student spend at least one Winter Term in town. I don't think that I adequately prepared myself for what the weather gods threw at me when I returned, however. Feet of snow? What's that? Negative wind chill? Why can't the temperature just BE THE TEMPERATURE? Oh, Ohio. How you frustrate me between the months of November and March.

Anyhow, I settled back in to my co-op last January armed with extra-bright light bulbs and the warmest down comforter that I could find. (Thanks, Ikea!) It seemed like most of my days would be spent snuggled up in the Keep lounge sipping hot cocoa and reading Rainer Maria Rilke...until I got The Call. Yes, ladies and gentlemen. The Call.

The Call was from bassist extraordinaire Erin Lobb, asking if I wanted to jam sometime. We had discussed the idea briefly before break, making plans to include the beautiful and ultra-talented Sara Sasaki on fiddle and anyone else around interested in folk music. The conversation went something like this (if I remember correctly):

The girls came over pretty much every day; Erin would always bring a Thermos of espresso and some kind of delectable baked good to share. We'd take turns calling tunes - "Shady Grove," "I'll Fly Away," and "Wagon Wheel" were among the first that we tried. But there was something different about playing with Sara and Erin...something I couldn't quite put my finger on at first. When Sara started predicting my vocal deviations in order to produce the perfect harmony and Erin began matching my rhythmic improvisation with bass hits, it was clear to all three of us that these informal jam sessions had evolved into band practices - and so the Black River Belles were born.

I completely credit Winter Term for birthing the Belles. I don't think that we would have realized our potential for barn-burning any other way - I know for sure that having that month to reevaluate the direction in which I'd like to take my musical education has only made me a better musician and a more focused student. It's been just over eleven months since Sara, Erin, and I first played together, and guess where we are now? In the final stages of planning our 2010 tour. So, thanks, wind chill. Thanks, incessant snowfall. You found me a band and two future bridesmaids...and I'm all the better because of it. 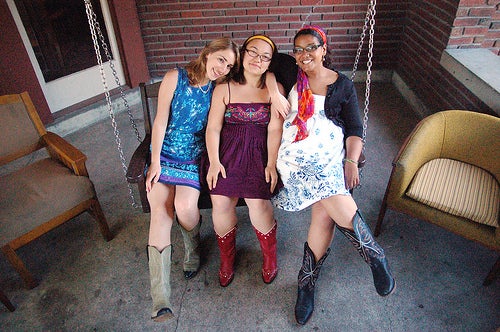 I LOVE YOU SO MUCH. This just made me cry :)

Reading this was an amazing Thanksgiving present! Will you guys ever cover "How to Grow a Woman from the Ground"?

@Aries - Sara and I actually played through it a couple of times over Fall Break...perhaps you'll hear it soon!

Man, I wish I was musically inclined. Being in a band seems oh so much fun.

P.S. The last sentence of this post made my heart melt a wee bit.

This is a beautiful creation story. :)

Great blog girl. You are a good writer, I'm sure a great lyricist and musician too. I'll look out for you :-)