After my crazy week of Music Man, I thought that I could relax, at least for a few days, before I began the process of scary paper writing. (Apparently I need to work on my theses. Knowing this creates a certain paralysis within me that makes it very hard to start writing the paper at all.)

Of course, I was mistaken. I spent Monday making up for all the work that I hadn't accomplished during the Week of Craziness. I had a lot of reading to do, most of it from a novel set in the late nineteenth century that had one of the most complicated love polygons I'd ever experienced. (I also had odd flashes of Bleak House, but that's another story.)

Tuesday, I had my usual full day of classes, which culminated in an epic man-versus-machine battle of my will against that of Sibelius. For some reason, that computer program for writing Western musical scores didn't want to comply to my demands that it blend with Indian ways of notating music. I'm not really sure why it was so stubborn.

This would all have been a fairly normal Tuesday, but it didn't end there. That evening, I went to a talk given by the (in)famous Ralph Nader. When I first heard that Ralph Nader was coming, I thought it was a practical joke, since the posters went up right around April Fools' Day. Fortunately, it was not a joke.

I wasn't sure what sort of response I expected Ralph Nader to receive from the Oberlin community. I assumed it would be something like my own: accepting, but slightly skeptical. As it turned out (and I wasn't really surprised to see this), there are several Nader fans on campus. And why not? A lot of his points were very logical, and though I don't agree with everything he said, I certainly respect it. There are not a lot of politicians out there who are willing to take a stand on the Israel/Palestine question that is not completely pro-Israel.

Understandably, I didn't get much work done on Tuesday, which meant that I had a lot to do Wednesday. This is normally the case. Wednesday is, after all, my get-work-done day. The highlights of the work I accomplished were more reading about messy love polygons, a lab report involving Beer's Law, and the composition of some rather bad poetry.

It couldn't stop there, though. I had completely forgotten that the Oberlin Orchestra concert was that night, which, of course, I had to go to. At this point, I know several people in the orchestra, including (but not limited to) my violin teacher, my friend across the hall who isn't a Con student, and a girl down the hall from me who plays oboe.

Besides this, they were playing Firebird, and I'm not one to pass up ballet music.

I'll leave you with a recent photo of the Oberlin campus that you can (if you squint hard enough) use to interpret my whole week. (Hint: There are obstacles, but there is still beauty.) 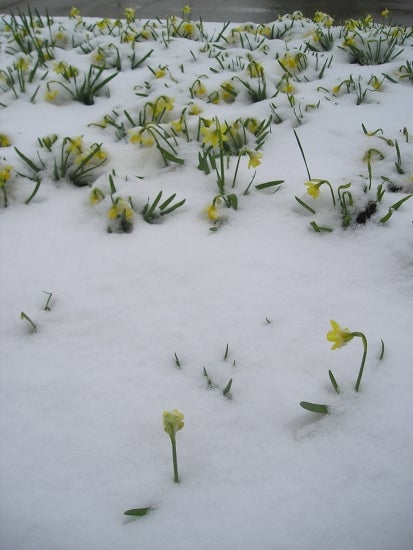