Wherever I find myself on campus, from the farthest reaches of the Arb to the deepest recesses of the con practice rooms, I always feel a warm, home-bound fuzzyness when I head back to my co-op. It stands in the middle of south campus, the odd clunky duckling amidst beautiful buildings like Talcott and Baldwin, where it leads a loud existence of community, intentional space, and unabashed cooperation. It is Harkness, quirky and lovely, and it is home. 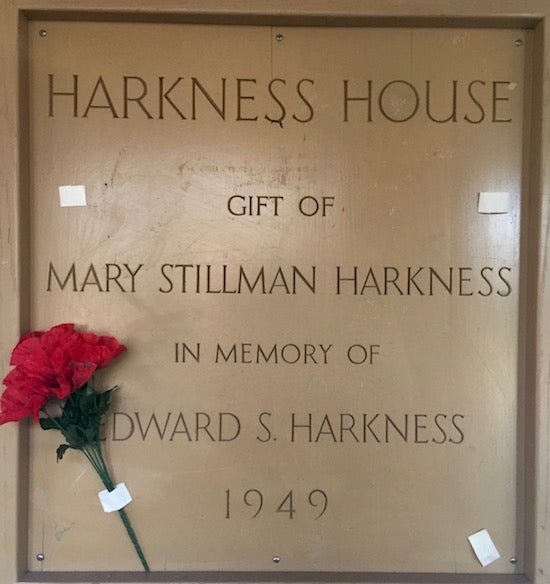 This post is gonna be a bit of an introduction to Harkness, both the dining and living sides of the co-op. I'll show you around!

Upon entering, you'll see a verandah covered in an eclectic mix of (generally): a grand piano, electric organ, various athletic equipment, and a slough of bikes, all surrounded by a striking surrealist mural. A month or so ago, a hammock cropped up in this area as well, much to our communal delight. 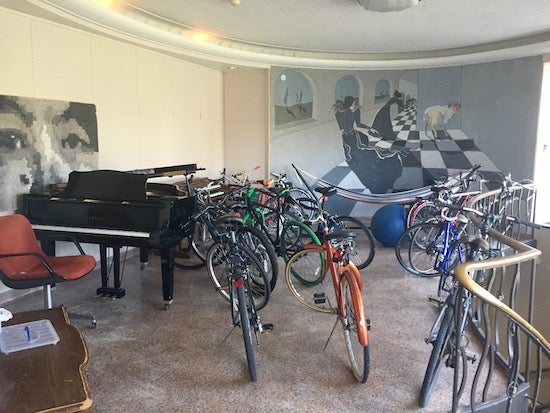 Turn to the left and you've arrived at the glorious Hark Lounge. At any given time, the furniture might be arranged to support a blanket fort, circle meeting, or the ever-popular couch boat. There's often cozy lights, several yoga balls, comfy pillows, and a general atmosphere of happy disarray. There's always many installations of different art, from the permanent murals to rather ephemeral piles of forgotten personal items. 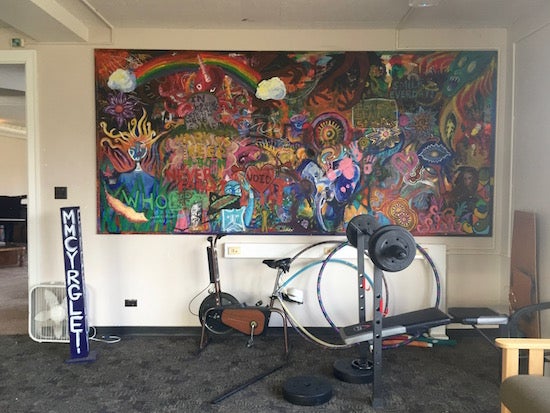 The lounge also boasts a wonderful collection of books, which has at different times been organized according to color. 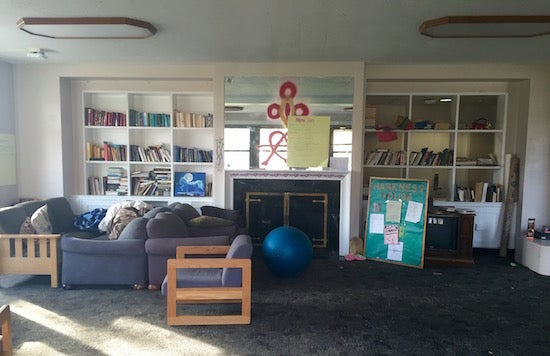 I'll stop a minute here to break down a bit of what living in this co-op entails (I'll talk about dining too! read on!). 64 people live in Harkness, and we meet periodically throughout the semester to decide on our policies and also just to check in. We have two HLECs (Housing Loose Ends Coordinators), which theoretically function like RAs, but are actually more like advocates and friendly sources of support. Each person does a minimum of 1 hour of house clean-up per week, but many people do other things to keep the house up and running as well.

One of the most beautiful aspects of living in a co-op is the commitment to making sure everyone is as comfortable with our policies and environment as possible. In dining we use a form of modified consensus decision-making (more on that later!), and we follow the same basic premises in our housing discussions. When we talk about issues like cleaning, quiet hours, and showers, there's a general goal of talking until everyone feels good about them. There's an established network of proxy forms and housing advocates in place as well, which helps to include people in the discussion who might not feel comfortable speaking up about certain issues or opinions in front of everyone else. There's an unofficial goal of upholding the "cooperative spirit," which aims to make the co-op safe and comfortable for all.

Now on to the living spaces. Harkness has three floors of rooms, all open doubles of varying sizes (but if you're an HLEC, you get one to yourself!). The hallways are sometimes a bit of a spectacle, because we have chalkboard paint walls, and door decor is IN.

My room is tucked into the southwest corner of the third floor, and is slightly bigger than most of the dorms in this building. Due to a series of miracles and one incredibly generous friend, this year my roommate and I acquired a snazzy sofa, rad rug, and a decadent mini-fridge, all for free. It's so important to build your own room into a place of comfort and control, and we think our room is super cozy. Most of the time, it is functioning in a state of happy chaos, but we have very similar cleanliness standards, so we're pretty good about keeping it under control. 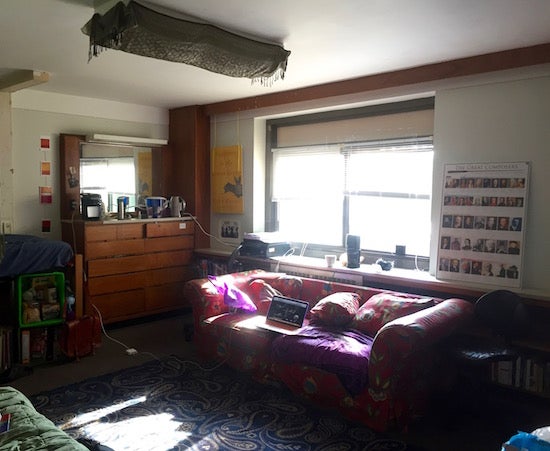 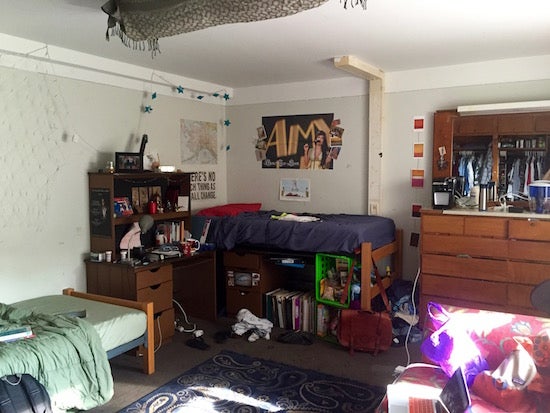 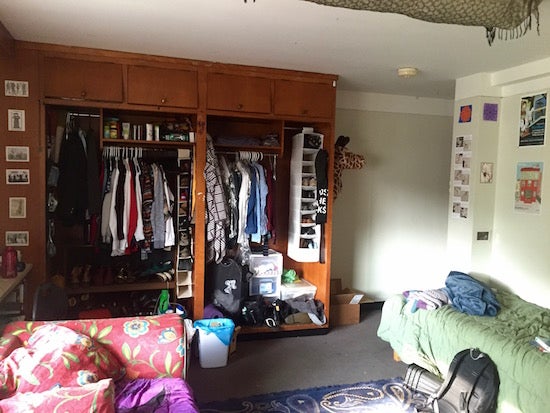 For the sake of contrast, here's a couple sneaky throwback pics to my room last year, way down on the second floor of Harkness. Note the incredibly un-sturdy way I rigged my bed up, my roommate's exquisite decorative flair, various art rental acquisitions on the wall, and the same old Harkness closets. 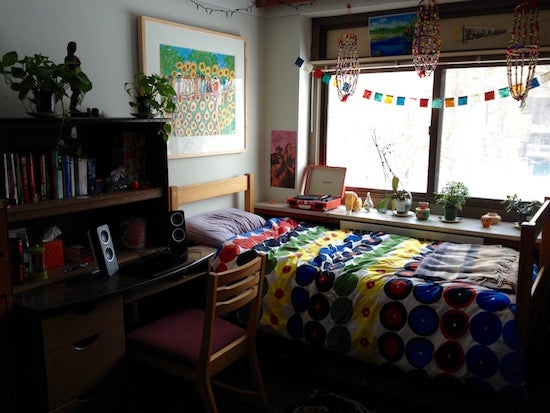 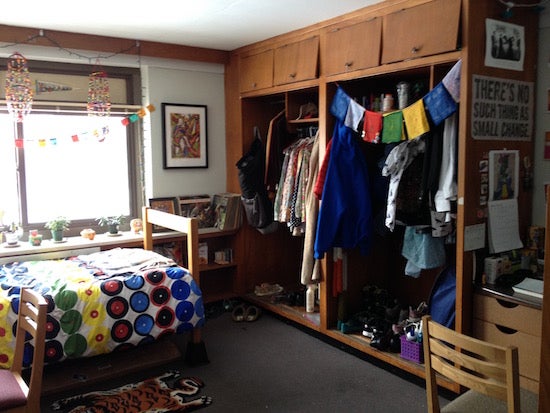 There is one bathroom on each floor of the building, and at our housing meetings we establish how they are going to function. During my time here, the bathrooms have been gender-neutral, meaning that anyone is free to use the bathroom with anyone else, regardless of gender identity or expression. We also have a single-use bathroom down in the basement by the dining area.

To many people outside of Harkness, our infamous "open showers" system is the source of hushed gossip, but that is due primarily to misinformed rumors. Each floor has a room of open showers, like this: 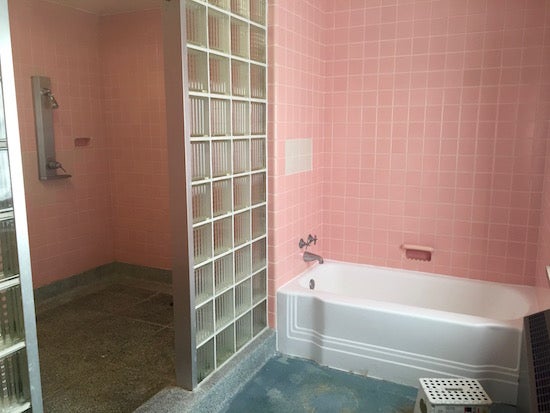 During my time here, the showers have functioned as such: there's an "Open/Closed" sign just outside of the shower area. If it is flipped to open, that means anyone can come in and shower at the same time as anyone who is already in there. If it is flipped to closed, that means whoever is in the shower wants to be left alone, and everyone respects that. While many people think that an open shower system is a valuable way to desexualize/de-objectivize naked bodies and promote inclusive body positivity, there are also many people who prefer privacy, and our system works pretty well to respect everyone's preferences. There's also laundry rooms on the 2nd and 3rd floors, storage, and trash and recycling facilities on each floor. 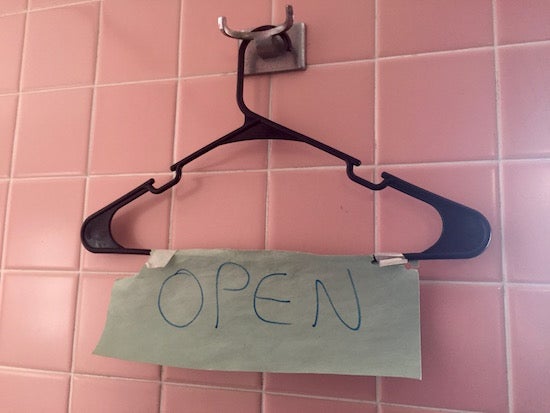 In addition to these standard features, Harkness also has a variety of areas entirely unique to our building, like:

this incredibly janky elevator, a relic from a bygone era that's rumored to be haunted at night: 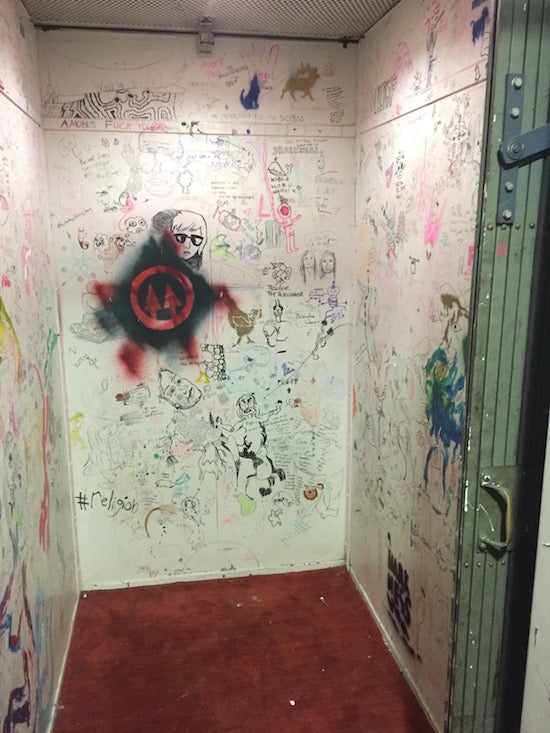 this weird room in the basement that's hopefully not in use: 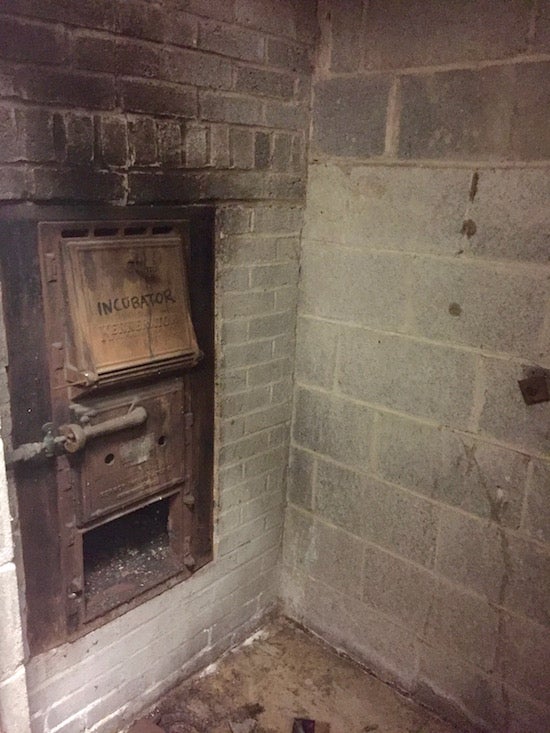 this area where we used to store our tofu-making equipment (a production of longstanding tradition that was discontinued last year due to financial detriment): 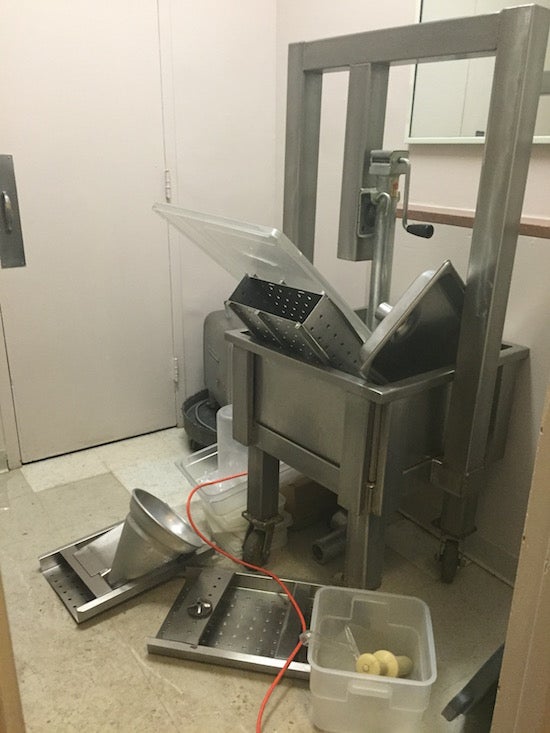 SWAP, the book co-op, an amazing resource for trading textbooks: 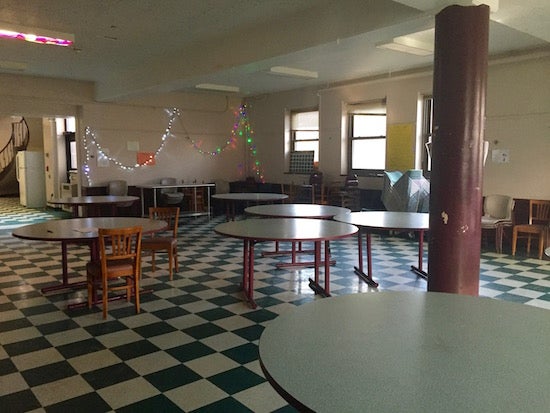 With our fully-furnished industrial kitchen 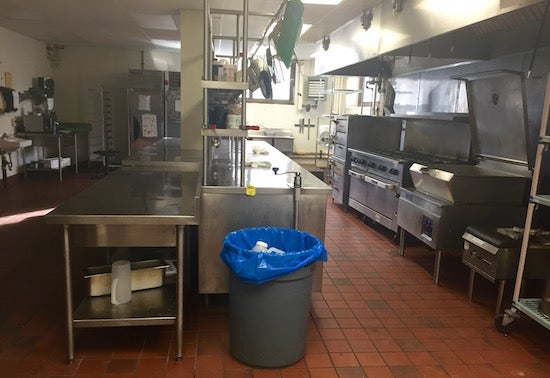 We generally have 110-115 members of the dining co-op, who all contribute 4+ hours of work per week to put healthy food on clean tables. Each meal has a headcook, other cooks, and a full crew to restore the kitchen to safety standards following the meal. In addition to meals, there are also Tasty Things Makers, Bread Makers, and Granola Makers, who fulfill their co-op hours by putting out something scrumptious for the co-op every week. There's also many different co-op positions that all work together, such as DLEC (dining loose ends coordinator, who facilites discussions), Food Safety Coordinators, KitchCo's, Food Buyers, Advocates, NutCo's, and a host of other acronyms. While I won't delve too deeply into the complicated structure of positions in OSCA, some other bloggers have done just that! Like this one and this [other] one. Basically, there's likely a way to do your part for the co-op while also sticking true to your own interests, whether it be cleaning, cooking, buying, managing, or facilitating.

In dining, many of our discussions focus on establishing our internal policy while also thinking about our external impact. Some recurring discussions throughout the year are:

All of these and more are carried out during meals, using our system of modified consensus. This frequently involves a little background info, then group discussion, followed by proposals, which we then vote on. All of this is recorded in an illustrious, wordy document in the cloud called Status Quo. While this might sound a bit complicated, new members quickly internalize the rhythm of the co-op, and many find discussions are a valuable source of community and conscientious co-habitation. 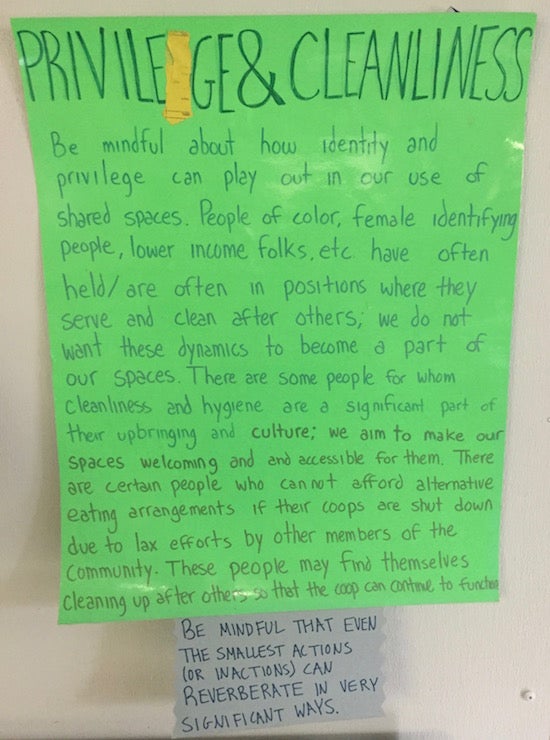 Be mindful about how identity and privilege can play out in our use of shared spaces. People of color, female identifying people, lower income folks, etc., have often held / are often in positions where they serve and clean after others. We do not want these dynamics to become a part of our spaces. There are some people for whom cleanliness and hygiene are a significant part of their upbringing and culture; we aim to make our spaces welcoming and accessible for them. There are certain people who cannot afford alternative eating arrangements if their coops are shut down due to lax efforts by other members of the community. These people may find themselves cleaning up after others so that the coop can continue to function.

Be mindful that even the smallest actions (or inactions) can reverberate in very significant ways.

Structure aside, here's what the co-op really looks like: 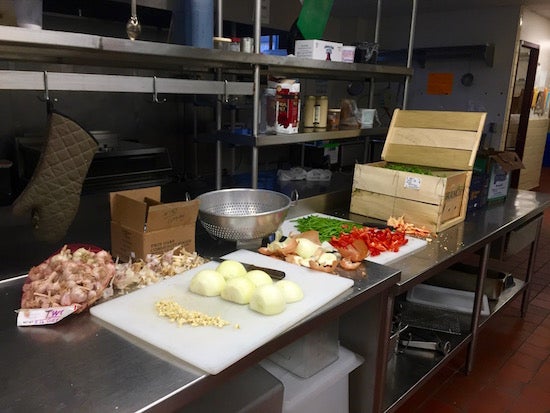 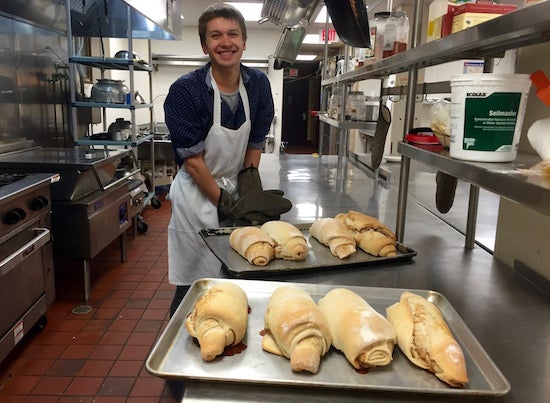 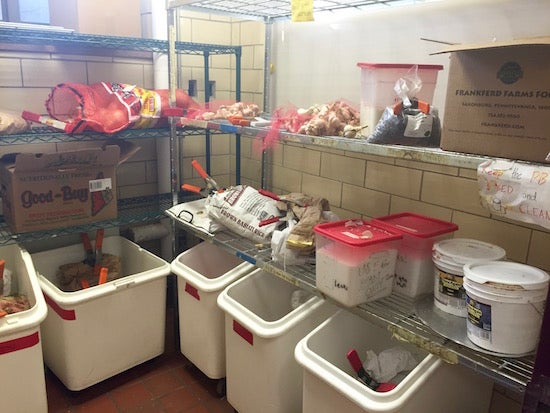 In addition to the delicious food and wonderful community the co-op provides, there is one overarching benefit to living or dining in Harkness/anywhere in OSCA: *saving money*

This table is taken directly from OSCA's website, and really highlights the tremendous benefit of co-op life. Since the College requires most students to live on campus, many students like myself could not afford Oberlin without OSCA. Although OSCA members are selected by a random lottery each year, meaning some students won't initially get into the co-op they want or need, there's a pretty good waitlist system that helps people get into OSCA throughout the semester. If you weigh the financial benefit against time spent working in the co-op, it's the highest paying job on campus!

All of this said, I'm sure I left out many important aspects of the co-op, because there's so much *good* to talk about. Harkness is only one of the many terrific co-ops on campus that comprise OSCA, and every other co-op boasts its own handful of quirks and special characteristics. Co-ops, co-ops, co-ops!

YES to all of the benefits of living/dining in a co-op. As long as the unflattering photos don't scare people off, this is such a helpful post.

HARKNESS MY HOME FOR THREE YEARS I HAVE SO MANY FEELS. Mainly hungry ones because it's almost lunch time.

Also: it is possible that you are currently living in the room of another former Oberlin blogger, Eli. Ohhhhh Harkness.

Thank you for this wonderful trip down memory lane! I lived in Harkness my first two years of college, 1985-86 and 1986-87 and was very active in co-ops all four years at Oberlin. Sorry the tofu maker is no longer in use but glad you have a book swap!

Oh Harkness! I lived there in 1986. That little weird basement room was home to Rippie (sp?), a dude who visited Oberlin and stayed there for months at a time. Rumor had it he was a trust-fund hippie, but I never knew him personally. There were free tampons and soap. I had to go out and get a cheeseburger every Friday because the vegan life turned out not to be for me.

I have a very deep suspicion that I lived at Harkness for a semester while I was at Oberlin.

What happened to all the forks that were in the ceiling?? Maybe after 30 years they've all fallen down...

Thank you all for these great responses! Anne, it's definitely a bit sad that there's no more tofu production, but happily that means we now have Sunday night dinner instead!

Elizabeth, that certainly sounds like Harkness. And Dale, there's only been one stuck to the ceiling while I've been here! Perhaps they were taken down, (sanitized!) and used in a time of dire need.

How fun to see this! I’m amazed that the mural is still there in the bike area.
I painted that as part of the winter term project, I assumed it had been long painted over
I have lots of very good Harkness stories
:- )
thanks for the post
claire b cotts
class of 86