I'm doing a tribute to my hometown because I think it's an underrated city. Underrated in Texas even. No shade to Austin, but I think Houston is a superior city. I don't think there are very many Houstonians in Oberlin, and if there are, please show yourselves! If my memory serves me correctly, Oberlin doesn't spend a ton of time recruiting in the South. This is kind of a shame to me because people from Boston and San Francisco already know about Oberlin! I think Oberlin could stand to see some more diverse backgrounds.

Houston is the fourth largest city in America, the largest city in the South, home to about 2.2 million people. We are one of the most diverse cities in the country. We have lots of professional sports teams, if you're into that sort of thing (I'm not). If you're a person who likes the arts (I am), then you will enjoy our large Museum District, as well as the numerous, year-round, residential dance, symphony, opera, and theater companies we have to offer. Apparently, we eat out more than any other city in America, which makes sense, because we have a lot of delicious food. The weather pretty much ranges from warm to hot, with a few mildly chilly days thrown in. We don't get seasons - it is green year-round.

I have lived there all my life, save for the months I spend in Oberlin. Here are some of my favorite Houston haunts:

I grew up going to Cactus Music at its old location on West Alabama. I loved browsing the CD and video collections as my mom looked for her stuff. It's in a different location now, but it's still the same ole Cactus. It's where I bought a lot of music that was really important to me in middle school. As a college student, I enjoy looking for vinyl and, occasionally, music memorabilia. The staff is always friendly, and there is often live music and meet-and-greets. One of my favorite restaurants (59 Diner) was located across the street, but it closed down while I was away at college, and I didn't get to say goodbye, and I am still upset about this. My idea of a perfect day was going to Cactus and then going to 59 Diner for a chocolate shake and chicken tenders, and now I can't do this. However, I highly recommend Amy's Ice Cream next door, and if you're really desperate for some chicken tenders, there is a Whataburger nearby. I also am obsessed with Whataburger, but that is a discussion for another time.

Located in the Museum District, the Menil Collection boasts an impressive variety of all sorts of art, from Warhols to medieval to African masks. It is also FREE! The Menil encompasses a few different buildings that aren't part of the main collection, like the Cy Twombly Gallery and the Rothko Chapel, which are both worth a stop. I have been on many a school field trip to the Menil, but I like it a lot better now that I'm not forced to go. Wes Anderson also likes this museum. Stick with me, and I can show you where Rushmore was filmed. And Reality Bites. And some of Boyhood. For example, some of Boyhood was indeed filmed in the Museum District, in the Houston Museum of Natural Science, and Hermann Park, places that I visited often as a child. That, coupled with the fact that I was born in nearby Park Plaza Hospital, means that Boyhood makes me feel some type of way. Actually, I'm pretty sure Hotel Zaza was also in Rushmore, so there's a lot of sightseeing in this neighborhood, centered around one block. 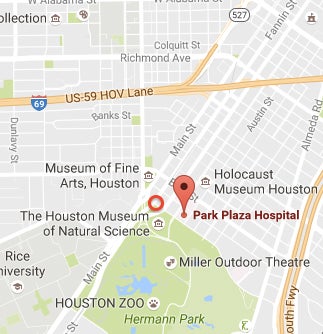 The red circle is Hotel Zaza. The Museum District is full of movie magic.

I'm really getting off topic now, but the Museum District is filled with some real gems, like the Museum of Fine Arts, Contemporary Arts Museum (also free!), and the Children's Museum. You can make a day of it by visiting a few, and then having a picnic in Hermann Park. And if worse comes to worst, the Medical Center is a block away! I hope you don't have to ever go there on your vacation, but I guess it can give one some nice piece of mind to know that the world's largest collection of hospitals is only minutes away. And when I say world's largest, I am not using hyperbole. Everything's bigger in Texas, y'all.

(I also live on the same street where Shirley MacLaine lived in Terms of Endearment, but that's in River Oaks, not the Museum District #hollywood.)

Did you know that "Houston" was the first word said on the moon? That's because Mission Control was located in Houston, at NASA. Do you want to SEE MISSION CONTROL? And ROCKETS? And a bunch of other cool space stuff? I personally think outer space is pretty much the coolest thing going, but even if you don't, I'm sure you'll enjoy yourself at Space Center Houston. There are multiple exhibits, and you can see real life astronaut space suits and touch a moon rock and watch a movie on a giant screen.

Montrose is Houston's "gay neighborhood" though, demographically speaking, I'm not sure if that's the case anymore. Regardless, Montrose is a fun and quirky place filled with thrift stores and coffee shops. I like to go shopping on Westheimer because I can buy vintage pieces as well as blow my money at American Apparel. There are lots of good restaurants in the area, ranging from cheap eats to v expensive and classy. My personal favorite, relatively casual place is Dolce Vita, which is a pizza place. But I always get pasta. Always. Montrose is very close to the Museum District. It's also the neighborhood where I spent the first few years of my life. My preschool/elementary/middle school is there. I am very emotionally attached to this neighborhood, I guess is what I'm trying to say (I also get my hair cut there).

There is, of course, tons more that I haven't covered. Houstonians tend to divide themselves based on whether or not they are inside or outside the Loop (Interstate 6-10). I am inside the Loop, and therefore, my Houston is located around the radius of just a few miles. Houston is physically enormous, so there's a lot to explore. I haven't even covered events! Our biggest event is the Houston Livestock Show and Rodeo, during March. Like our Medical Center, it is also the world's largest. If you want to see some real life cowboys rope cattle, this is your event. If you just want to go to the carnival, that is also an option. If you want fried food, this is DEFINITELY the place to be. You can see some real big name acts come to perform. It's mostly country, but artists as diverse as Elvis, Selena (both Gomez and the REAL Selena), and Hannah Montana have stopped by. Other fun Houston events are the Art Car Parade, and the Greek Festival.

Anyways, that's all I have time for right now, because I could go on and on about Houston, and frequently do. Since so few Obies have any concept about Texas living, I find myself acting as a spokesperson for the state, trying to convince people that yes, Ted Cruz lives close to me, but we've also produced Beyoncé, Buddy Holly, and Lyndon Johnson. We're not only a cultural hub, but a place of incredible diversity. Assuming things like racism and sexism and homophobia only happen in the backwards, oppressive South both negates its presence EVERYWHERE in America, and negates the incredible communities fighting against it.

There's a reason Beyoncé is always referencing this place. If you ever venture down South, I recommend you come and see why.