If you love dancing but don't know where to start — or if you don't know if you like dancing but you're willing to try it out — summer intern Amanda has info on the Oberlin social dance scene for you! There is a lot of dance on campus, and many opportunities to learn various forms, so go ahead and join in.

Before coming to Oberlin, I knew very little about social dancing. Aside from learning a few basic steps in gym class senior year and one (hilariously) failed attempt by our Spanish exchange student to teach me salsa, I hadn't done any dancing since jazz class in 2nd grade where it was cute when we fell over.

But during orientation week, there were several social dances and beginner lessons held, so my friends and I tried to hit them all up. Two years later, I'm totally in love with social dancing and it's become one of my favorite things to do on weekends. Here's a run-down of some of the kinds of dances that are popular on campus!

Latin social dance is the umbrella term for the many different styles of dance that (mostly) originated in Latin America. Some of the more well-known styles include Salsa, Merengue, Mambo, Bachata, and the Cha-cha-cha. These dances are historically associated with certain styles of music which often carry the same name as the dance. In recent years, it's not uncommon for Latin dances to be applied more generally across musical styles.

The main group on campus for Latin social dancing is Movimiento. They are open to anyone who wants to learn how to do various kinds of Latin dance. They perform choreographed routines at shows on campus such as the Student Dance Showcase and Colors of Rhythm, an annual performance designed to highlight artists and performers of color who are disenfranchised in academic performance settings.

Swing dance grew out of the swing jazz era from the 1920s to the 1950s. Like Latin dance, it serves as an umbrella category for many different styles, including East Coast Swing, West Coast Swing, Lindy Hop, Balboa, and Charleston. Many dances began as vernacular African American dances in African American communities. The term 'swing' comes from the style of jazz music from which the dance was developed.

OSWING is Oberlin's swing dance group on campus. They host weekly dances on Fridays in South Studios, the dance studios in South Dorm. Once a month, they also host a dance in Hales Gymnasium, which always includes beginner lessons beforehand. If you want to learn to dance swing, they generally offer two ExCos: one for beginning swing and one for continuing swing.

They also host the Oberlin Jazz Dance Festival, which is a full weekend of dance, workshops, and dance competitions attended by people from all over the US. They bring in guest instructors and offer beginner, intermediate, and advanced classes all weekend. 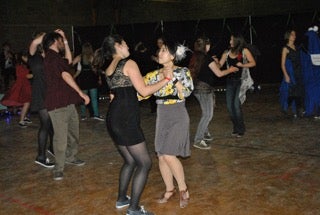 Similar to swing dance, blues dance also developed within African American communities, though blues came a little earlier around the turn of the century. It has shifted and changed over time, so some original blues dances look very different from what we find today. A lot of people associate blues with sensuality, because it can be danced in a very close, intimate setting. However, beneath the surface of what looks like a fluid, easy-going dance is a lot of concentration on the communication with your partner and following boundaries of movement. A lot of blues focuses on the music, with the dance more of a vessel to interpret the music and the emotions within.

OSWING also oversees the blues dances on campus. After the weekly swing dance, there is also a weekly blues dance in South Studios. On nights when the swing dance is held at Hales, you can often find late night blues held in the Cat and the Cream coffee shop from midnight until 2 in the morning! There are sometimes other pop-up blues dances around campus as well - I've heard of several impromptu dances happening in the Tappan Bandstand when the weather is nice.

You can take one of the two blues ExCos to learn how to dance, either the beginner class or the continuing class. Blues dancers also love to teach new people and will often give you mini lessons at the weekly dances to get you started.

Contra is a folk dance popular around North America and the UK. Kind of similar to English country dancing or square dancing, contras are danced in long lines which stretch down the dance hall. You pick a new partner for each dance, who stays with you during the whole 10-15 minute dance. You and your partner progress up and down the lines, repeating the same set of steps with each new partner-couple you come across. The music has a wide variety of folk influences, and can range from lively jigs and reels to something smoother.

My favorite thing to do on a Friday is attend a monthly contra dance hosted in Hales Gym by the Oberlin Contra Dance Club. These dances are open to all levels of experience, because not only is there a beginner lesson beforehand, but each dance starts with a walk-through of the steps, which are also called out by the Caller during the dance. Traditionally, contra dances come in two 90-minute sets, with a waltz at the end of each set and a break in between.

Oberlin also hosts the Dandelion Romp, which is a whole weekend of contra dancing attended by people from around the country. There are professional Callers, well-known bands, workshops, and lots of dances. For those (like me) who like to contra dance barefoot, be prepared for blisters and callouses!

Some additional fun things about social dancing at Oberlin: 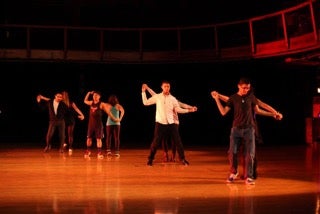