My finals week this fall was pretty heavy; I had three exams and three papers, which is pretty unusual since classes tend to require either a final paper or exam, but generally not both. This wasn't quite as nightmarish as it sounds, since the material I was studying and writing about was pretty interesting and therefore not too strenuous to work on.

For my "Complex Cognition" course, I wrote a research paper about how grammatical gender systems do (and do not) influence how speakers of different languages think about inanimate objects. The whole writing process was really cool, since I had never written an extensive paper for a psychology class before. Though writing papers for a discipline you've never written one for before tends to be terrifying at first, it's rarely as bad as it seems.

The paper I wrote for my Anthro class was also pretty fun to write; it explored how Orthodox Jewish women navigate the generally patriarchal religion, using rituals that are traditionally seen as sexist to their advantage. My health economics paper, which focused on the effects of lower deductibles on health care consumption in the US, and my Biology final lab report, which investigated the effects of the endocrine inhibitor Ancymidol on growth in Brassica rapa plants, overlapped quite a bit less than the other two but were still interesting subjects in their own right.

In addition to these papers, I had exams in complex cognition, health economics, and Biology 100. The latter was the one that took up most of my time, and I spent many hours in Slow Train (a comfy coffee house in downtown Oberlin) with my roommate Georgia studying for that exam while she worked on her French and religion papers. Getting a table at Slow Train during finals can be tough, but I found that if you get there at 9 or earlier there's usually one or two open. One of the many study sheets I made for my bio exam.


My morning routine on finals week began with walking to Gibson's, a local convenience store/bakery, where I would pick up a sweet chocolate cream donut. With my greasy but delicious donut in hand, I would then proceed to meet Georgia at Slow Train, where I would buy an iced coffee, snag a table, and get to work. 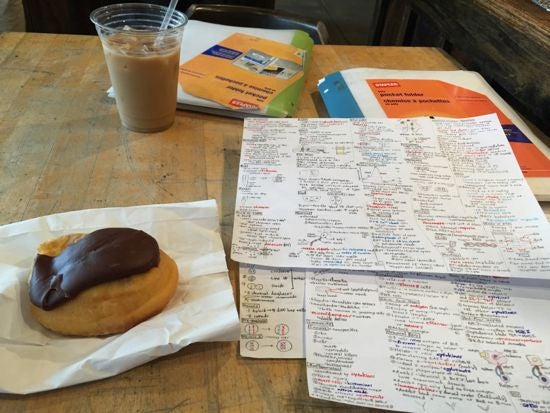 With a Gibson's donut and an iced coffee at my side, I'm ready to get to work.

Depending on how much work I was able to get done in the morning, I would either bike back to Harkness (the co-op I eat at) for lunch or get a delicious and surprisingly cheap bagel caprese sandwich at the Local (which is another coffee shop owned by the same people that run Slow Train, but for some reason they serve bagels and Slow Train doesn't). After lunch I would do a little more work, go to the gym for a bit, and then meet a biology study group in the science center. 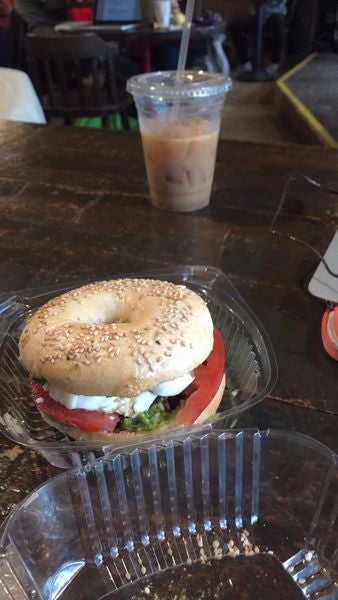 There's something very satisfying about looking back on a semester and feeling like you've stretched your mind in a million different directions, and I am fortunate to say that I've had that feeling after every semester at Oberlin so far. While some of my friends at other big universities seem like they're always reading books and writing essays, while others appear to only ever solve math problems or write lab reports, Oberlin allows me to do all of those every semester.

I personally love to take classes in several departments each semester, when possible, so that I can develop a wide set of skills and ways of thinking and not feel like I'm using the same parts of my brain, for example by doing only math or economics problem sets, for every class. Especially since I plan to eventually go on to med school, where I will basically take science courses 24 hours a day, I want to use my college years to get a true liberal arts education from which to build off of in the future, and at Oberlin I can do just that.