As mentioned in my previous post, I spent my winter term in Seattle doing circusy things at SANCA. That was my official project, anyways. I've also managed to get through a pretty dense, textbook-like book called The World Until Yesterday and have had the experience of what it is like to be an autonomous, independent adult living in a city, cooking and cleaning for myself on a regular basis, and traveling everywhere via public transportation.

First off, I just want to point out how valuable this last bit of my experience has been to me. Circus is fun and exhausting and challenging, but real life is that times ten. I come from a pretty suburban area in Tucson, and "downtown Tucson" is kind of an oxymoron and a joke. 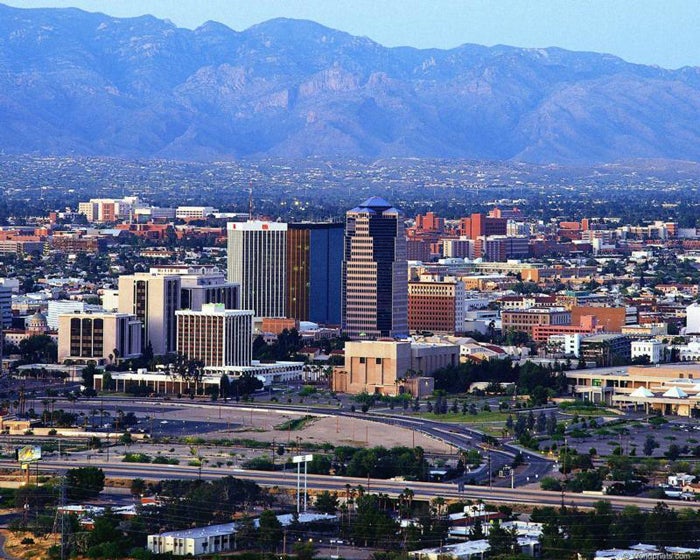 We have maybe 4 tall buildings in all of Tucson.

Needless to say, city life is definitely a novelty for me. It has been invaluable being able to feel out how city dwellers function, and has definitely made me appreciate not having lived in one my whole life. I know now more than ever before the kind of place I would like to end up in when I'm older, and I don't think I would have as clear an idea if it hadn't been for my experiences this January.

The first two weeks, as mentioned in my previous post, were based strongly in acrobatics (pun intended), while the second two weeks focused on aerials. And by aerials, I mean static trapeze, rope, and fabric. We trained for about four hours every day, which was exhausting and humbling. All of the staff at SANCA basically train like we train every day, but they also teach several classes and balance other side jobs in addition to that. They are all really excellent in their respective fields which include, but are certainly not limited to: Chinese pole, acrobatics, juggling, trampoline, lyra, trapeze, fabric, rope, cyr wheel, Russian pole, and unicycle.

Here is a picture of someone doing cyr, which is waaay harder than it looks. Trust me, I tried. 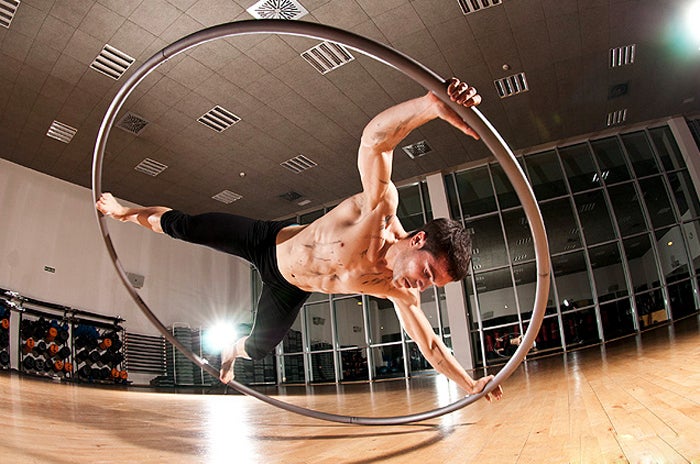 We also got the chance to do flying trapeze a couple of times, which was super fun. Here is a picture of my final fly last Friday (or should I say flyday). 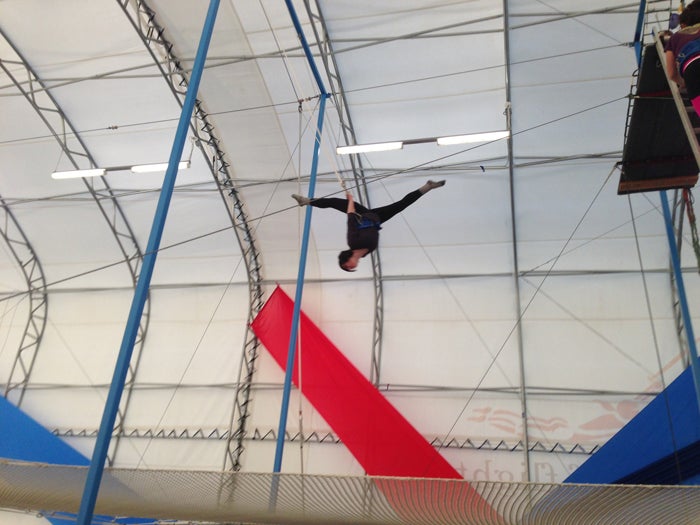 So there you have it. This month has been a ton of fun, and I'm grateful to have been able to spend my winter break doing more than the average college student, and getting credit for it no less! Although I have no plans of going into circus professionally (or even semi-professionally for that matter), it will always be a lifelong passion of mine, and I will remember this month fondly. 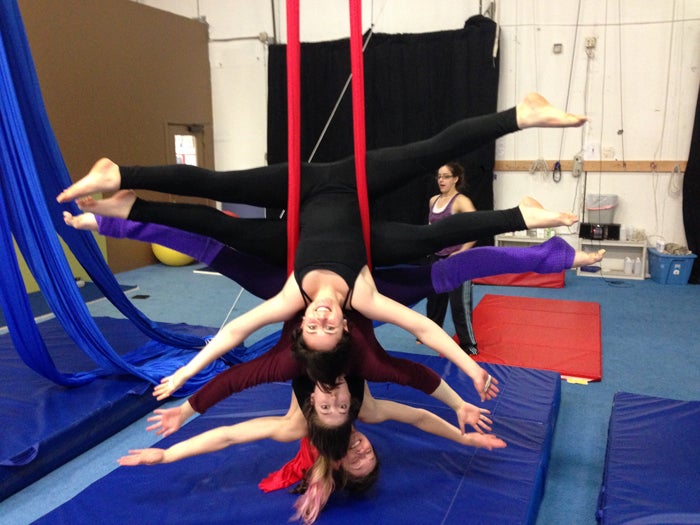 Me and some fellow aerialists messing around on the fabric. We called this "the caterpillar."

Aaaand here are some extra pictures just for fun. The quality isn't great because they were taken on a disposable camera, but it's one of the small sacrifices we hipsters must make. 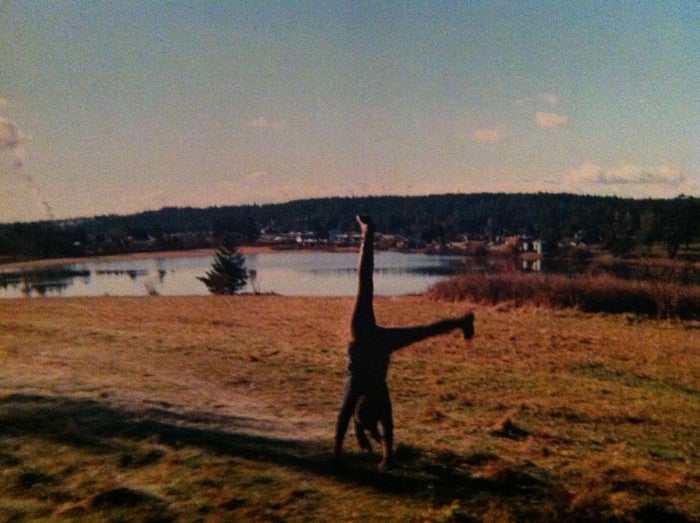 This is me near a lake near Port Townsend on the Olympic Peninsula. Some of my Oberlin friends and I drove up there for a weekend. It was super beautiful. Unfortunately, or maybe fortunately, we didn't make it all the way out to visit Forks (the town where the Twilight series takes place). 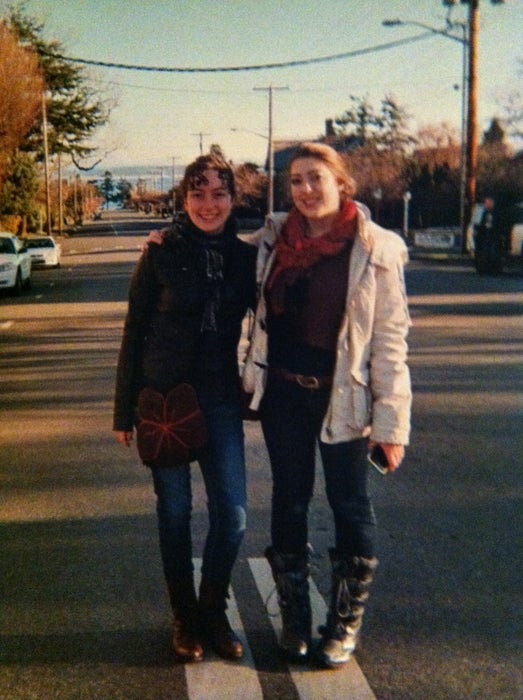 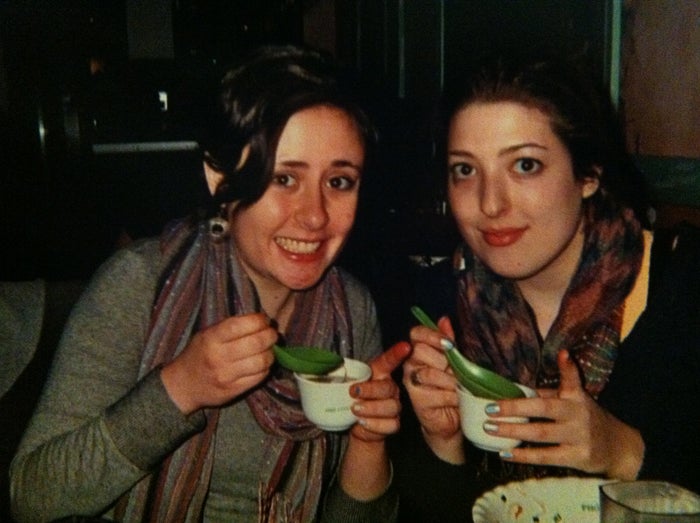 Quinn and I eating tiny bowls of pho soup. Pho is everywhere in Seattle. It's impossible to escape. Not that anyone would ever want to do such a thing.

I can't live without pho. I dream of pho. I even made it from scratch once and it was worth every hour of cooking it took. Sigh. Phoooooooooo.

Did you have soup dumplings in Seattle? I learned about them from friends who were at SANCA a few years ago and had the opportunity to eat them in NYC last year and OH MAN they are food witchcraft of the highest order. They're awesomeness.

Wait, you got to do lyra? And cyr?! What even is Russian pole! Not fair!