I realize I probably haven't told my esteemed readership about my plans for next year, the finalized version. I'm heading to North Carolina this summer to live with my girlfriend Liz (OC '10) and go after a Master's degree in Mechanical Engineering starting in the fall. I'll be studying at North Carolina State University.

For now, gather round the campfire for the last of Uncle Joe's Story Times. If you haven't read part one and/or you want to know why this isn't a list of things to remember as you take a big step in your life, read here: Part I

It was probably September my junior year, and Obehave! was getting back into the swing of things for its first semester as an official, chartered student organization. Our first show of the year was on September 10, at The Cat in the Cream. I don't particularly remember whether we were in top form yet or whether we were still shaking off rust, but we had a pretty good crowd for the show.

Greg and I got onstage for a game called Boris, where I played an interrogator and Greg played the interrogated. To help me in my task of getting information out of Greg was an imaginary 7-foot-tall muscle man named Boris. The audience suggested that I was looking for my missing chocolate-covered bacon (which is featured year-round at Gibson's downtown), and I decided to take on the persona of the owner of Gibson's, Bob Gibson, which I'm pretty sure is not the actual name of the owner of Gibson's, but is definitely the name of a former St. Louis Cardinals pitcher. The kind audience gave me the benefit of the doubt there. 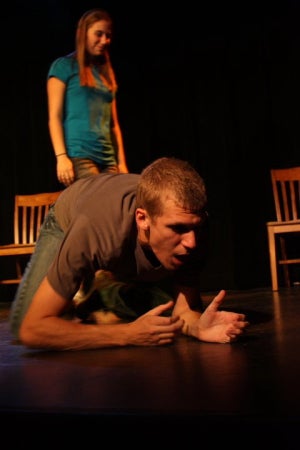 I had the gracious and friendly exterior of the actual owners of Gibson's, but a diabolical streak that revealed that a whole pig had to die for each strip of bacon and decided Boris needed to 'go get the bacon' when Greg finally revealed that he had eaten it all as soon as he got out of the store. The scene was twisted and violent in the end, but it was pretty funny. I remember having the feeling on stage that I could really do no wrong, that the audience was on my side and wanted to laugh, all I needed to do was give them an excuse. We were all making something big, ridiculous, strange, and funny together, and we could leave afterward with clear consciences because it was all make believe. It was a very cool feeling to share something that haphazardly created but so successful with the audience.

I've had moments on stage since then that I felt I had the audience in the palm of my hand to a certain extent, but for some reason that instant on stage felt like it lasted an hour, and I don't know if that particular feeling has visited me since.

I think that using the word 'crush' to describe an infatuation you have with someone is strange. In almost any other context, 'crush' is destructive, but telling someone you have a crush is almost always adorable and endearing. It is cute usually when you have a little crush on somebody. You can tell your friends you think she's cute, giggle about it at slumber parties.

A 'big crush' is different. A big crush can mean a long-term crush, sometimes a years-long crush. A crush. You can see this person date and break up with other people, and your crush is still there, steady and not at all pleasant or cute.

I had a friend who developed a big crush on a girl he didn't really know. He saw the girl a lot, knew her name, and his imagination took it from there. The object of his affection was perfect, because he wanted so much for her to be perfect. He didn't talk to her, and could hardly imagine talking to her. In a movie, this would be cute, and she probably would have secretly felt the same way for a long time and was just too demure to make the first move. But could you imagine actually going on a date with someone who you've built up in your mind as absolutely perfect? I can't imagine one of these turning into a real, healthy relationship ever. 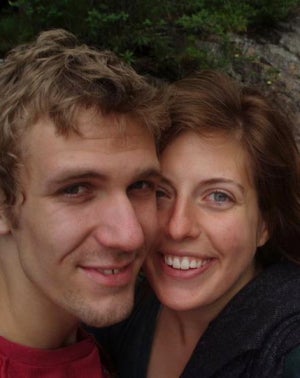 This was not an admire-at-a-distance crush, it was a get-bigger-the-more-you-know-someone crush. So I got out of my long-distance relationship (I know a little something about those) and during Commencement week, my long-time crush tried to kiss me on the lips! I knew I wasn't crushing in vain. We eventually found each other and goopity-goo-goo fell in luuuuuuuuurve!

The reason I wanted to tell these particular stories and why I shied away from a lesson list is not because I didn't learn anything from the experiences that I couldn't put in a little bulleted list. It's because those things I learned from them were really personal to me, and I don't think they apply to everyone. I really like being in my peak running shape, being able to run a personal record race on Saturday, run a 12 mile long run on Sunday morning, and still be able to play basketball or go rock climbing Sunday afternoon. It just feels great to me. I know that's not the case for everybody. I think I'm a performer, whether I like it or not. Maybe the same is true about being a teacher, although I'm not much of a musician. I'm a writer, I need to have deadlines to work well. I found somebody I keep falling in love with, but I can't tell you how to.

You can take general lessons from any of these stories that would be broadly applicable (work hard and succeed, fall in love with a friend), but I think they would be things you've heard a lot before and would have limited use for you. In experiences, you will find your own lessons, and your own self. I know that I learned how to recognize these lessons in my experiences while I was at Oberlin, and I do believe this was at the heart of my maturing while I was here.

Lessons learned, schmessons schmerned. My favorite part about being a human is that we continue to learn, even if we don't identify the lessons til later.

It's been fabulous to follow your on your four-year Obertrip, Joe.

I remember the Boris skit...that was what solidified Obehave as a group for me.

We used to do a version of the Boris bit, but it had a different name at our school.