There's this thing that I notice happens a lot on tours. The set-up is like this: it's sometime between October and March, possibly April. It's cold and cloudy, with a high likelihood of precipitation (to borrow a weather-forecaster phrase). My tour is huddled dubiously in the lobby of the Admissions office. I offer them umbrellas, and we sally forth heroically. About halfway through the tour, as we're basking in the warm oasis of Mudd Library or the environmental studies center, someone - from Texas, perhaps, or California, or South Carolina - will raise their hand and, with a desperate look out the window inquire: "So... what's the weather like in Oberlin?"

For some, Ohio weather can be a revelation. One of my hallmates last year grew up in Miami. When the first snowfall came she ran outside and danced. Within two weeks she had acquired a three-layer, ankle-length quilted coat several inches thick, and an aversion to the outdoors that lasted until May. For most people, the adjustment to winter isn't too hard; they get some wool socks and hunker down until spring, then set up camp in Wilder Bowl to bask in the sun.

(Oberlin students pile up in Wilder Bowl, desperate to feel the sun. Just kidding - this is actually a picture of Woodstock.)

As a lifelong Vermonter, I have the opposite reaction. Snow? Bring it on! Armed with a scarf from the Free Store (sparkly, pink, and eminently fuzzy), I can face the deepest winter chill. I relish snowshoeing across Tappan Square on a bitter February morning to get to the museum. (The snowshoes aren't strictly necessary, but if you've got 'em, hey, why not?) I've become a connoisseur of the magnificent snow sculptures that appear on campus: last Winter Term found an epic battleship in the middle of Wilder Bowl, and a near-indestructable igloo outside my co-op. 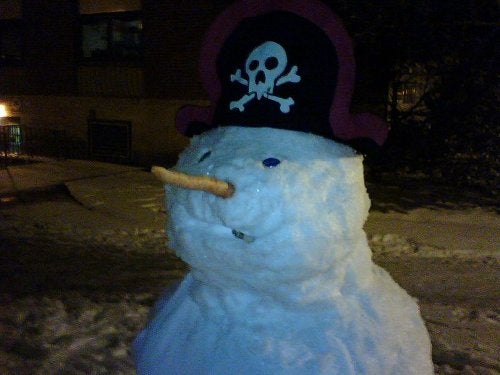 (A piratical snowman terrorizing the high seas outside Harkness.)

No, winter is no problem... fall is when I really struggle. Although the changing leaves in Tappan Square may seem like a big deal if you're from California, they're pretty underwhelming if you're used to New England autumns. Gray, rainy November days always leave me a little nostalgic for the crisp, clear weather at home.

On the bright side, Oberlin students have evolved various coping mechanisms to deal with the rainy weather. Although some opt for a classic umbrella-and-raincoat combo, most have a taste for the bizarre. On a rainy day, head up to the fourth floor of the library and look down into Wilder Bowl: you'll see a psychedelic melee of polka-dots, fluorescent stripes, tie-dye patterns, and cartoon characters floating past. My girlfriend has a green frog umbrella with pop-up eyes, which I love to steal. Last week I saw someone weaving down the sidewalk perched on a unicycle, holding an enormous umbrella above his head - the definition of "fearless." Raincoats are often abandoned in favor of more dramatic attire: cloaks and trenchcoats abound. And a small but bold contingent of Oberlin students just don't care about the rain, darting across campus in t-shirts and shorts, or even barefoot. This year one of my friends announced her determination not to wear shoes until fall break (she miraculously made it without getting frostbite).

But why get wet when you can be cozy? This semester, I have no classes two mornings a week. There is no greater pleasure than sleeping in, drinking tea in my pajamas, and then walking down to the kitchen to get some fresh hot bread, while water pours down outside. Miserable weather is a perfect excuse to install yourself in the library and get a ton of work done, or to spend the afternoon exploring a new exhibit at the museum. On rainy evenings, the lounge becomes a hub of cultural activity: people hold storytime, launch impromptu jams, play board games and build huge forts. Whether accustomed to tropical climes or bitter winter cold, everyone bonds over a common hatred of the rain. When the gray October clouds roll around again, we exchange grimaces, arm ourselves against the weather, and settle down to wait for clearer days.

On Ohio's behalf, I'll just point out that, aside from yesterday's rain, this whole week has been pretty spectacularly beautiful. Friday I went for a drive and was gobsmacked by color.

I won't quarrel with you about November rain, though. (I like your strategies for dealing with it.)

It has descended. I am armed with halogen lamps and my Firefly DVDs. See you in April.

@David: Of course now that I've complained about the weather, it's on its best behavior... we'll see how long that lasts.

Is Natalia the Miami friend to whom you refer here?