It's October and somehow I haven't gotten around to telling the Internet about my course load,so without further ado, my classes are the following

Intro to the Advanced Study of Literature - MWF 10-10:50 and M 7-9:30 PM
I think I might want to be an English major and English majors have to take this class before the end of their sophomore year so that they can take 300-level classes. There are a bunch of sections of this class offered each term so there were a few professors to choose from. I decided to take the class with Jen Bryan, who taught the amazing English class that I took last semester. Luckily, she is still awesome and she gets that my peers have really varied backgrounds in the study of literature. I could go on about Professor Bryan for an embarrassingly long amount of time, but it occurs to me that that might be a great post on its on so I will move along to...

Intermediate German I - MWF 1:30-2:20 - Sonja Boos
I decided to continue with German because I'm interested in studying abroad in Deutschland. Pretty straightforward. At the intermediate level, my classmates and I are expected to read German existentialist fiction in the original. That isn't so straightforward.

Intro to Comparative Literature - MF 2:30-3:45 - Jed Deppman
Even as I fall in love with that idea of majoring in English, the idea of majoring in Comp Lit is still pretty alluring. This class is basically the Comp Lit equivalent to English 299 in that majors are supposed to take it before the end of their sophomore year, so I decided that I would take both classes at the same time in an attempt to help me make a more informed decision about my major. When I make that decision, you all will be among the first to know.

Fundamentals of Linguistics - TR 9:30-10:20 - Jason Haugen
After taking the aforementioned awesome English class last semester, I decided that I wanted to learn more about linguistics, and based on the course title, this seemed like the class that would help me do that. Unsurprisingly, Ida is also in this class. 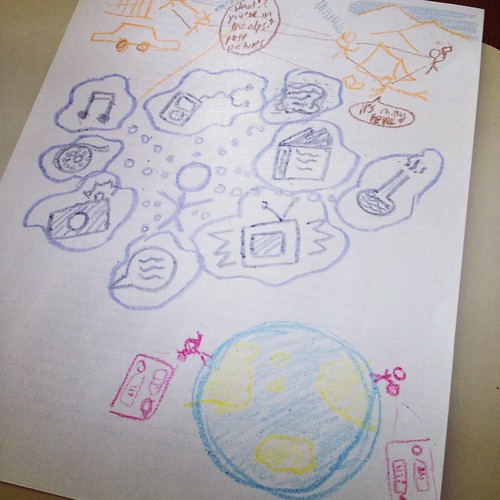 We drew with crayons on the first day of class. Life is sweet indeed.

If you've paid any attention at all, you've probably noticed that there are some connections between my classes. In fact, when I happened to run into my FYS professor in King the other day, I described my classes as "basically different names for the same thing." Most of the time, this is pretty awesome because I am obviously very interested in literature and language and how people communicate with each other, otherwise I wouldn't be taking five classes that are intended to educate me about systems of communication. Getting to read and write and talk about what I really enjoy pretty much all the time is great, and approaching similar questions from slightly different angles is interesting and intellectually stimulating.

The classes that tend to line up most often are English and Comp Lit. For example, we discussed "The Sandman" by E.T.A. Hoffmann in my Comp Lit class last Friday. One reading of "The Sandman" (and the reading that first jumped out at me) is that the characters represent ideals from the Romantic Era and the Enlightenment. Nathaniel, the story's protagonist, is a tortured artist who convinces himself that the monstrous Sandman who killed his father when he was a child has returned in the form of an Italian eyeglass salesman, while his fiancée, the level-headed and perhaps slightly cold Clara, believes that the Sandman only exists in Nathaniel's mind. However, this interpretation likely wouldn't have occurred to me on my own were we not currently reading Romantic poetry for English 299. I even made use of a dreaded disclaimer before my first remark in the Comp Lit discussion to note that "I've been reading a lot of Keats lately, so that's likely colored my interpretation of the story, but..."

I could even connect that particular Comp Lit class to German by saying that Hoffmann's decision to include fantastic elements in what is clearly the "real world" could be seen as laying the groundwork for later German authors like Kafka and Kurt Kusenberg. I could continue, but I think I've made my point. 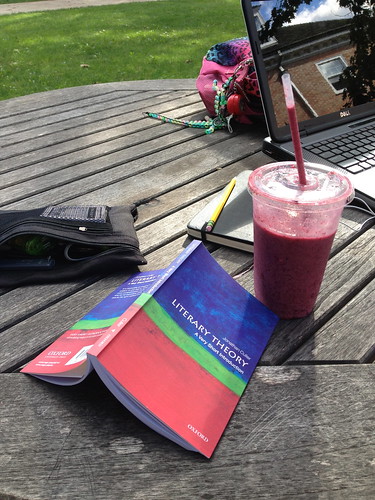 Reading about theory can't always be this glamorous, friends.

It's worth saying though that talking about similar things all day long can be exhausting. I remember one Monday in particular during which I spent my normal English class, the additional English night lecture, Comp Lit, and to an extent, German discussing literary theory. At the end of the night, I was one sentence away from my brain exploding as I whispered "il n'y a pas de hors-texte" on my last breath.1 And that's not even mentioning the sheer amount of reading I have to do. I don't mean skimming, I mean focused, notes in the margins, "wait I didn't get that I should go back and read that page twice more" reading. It can be pretty tiring. But honestly, what course load isn't tiring every once in a while? I'm pretty lucky to have a schedule that suits my interests so well and you'd better believe I'm savoring it, especially since three semesters in a row without a single natural science or math credit is my self-imposed limit. Oh well, more on what I do when I'm not in class should be coming soon. Until then, just assume that I'm spending all of my time reading, writing, or procrastinating on the internet.

1Never mind that I speak no French and would mangle the pronunciation, it's the thought that counts.