There's useful information somewhere in this blog, but first, the big accomplishment of my week: my closet is clean! In the process of cleaning it, I went through every single thing I'd saved as being "special" in the last nineteen years. In a hard-fought triumph against my packrat-ly nature, I threw out more than half of it. Fifth-grade essays, six academic planners, Pre-Calc projects, drawings of cats in lava boots produced circa age six--all recycled.

How could I do it, you ask? How could I, who cling to memories so strongly I write about them ("personal narrative" is just a clever disguise for "written snapshot"), ever get rid of so many things?

Yes, I have purged, and I feel somewhat liberated by that act. But, cautious pragmatist that I am, I have retained a security blanket: I took photos of practically everything. 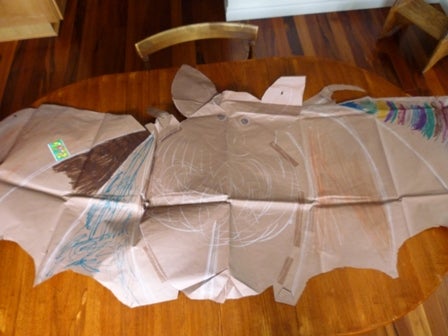 When I was in first grade, a small group of us did a project on bats that my mom volunteered to help teach. That means I ended up keeping the visual aid. This thing is HUGE--it took three six-year-olds to hold up its full wingspan. And it traveled with us from Minnesota.

The summer after fourth grade, I bought two packets of pipe cleaners and started making them into different sized archery sets. 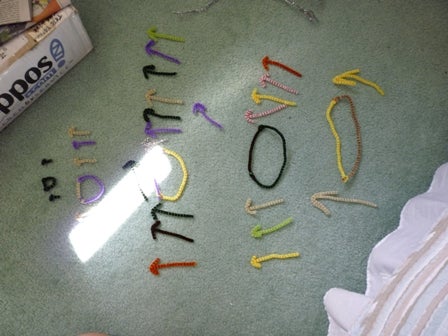 They got pretty tiny. 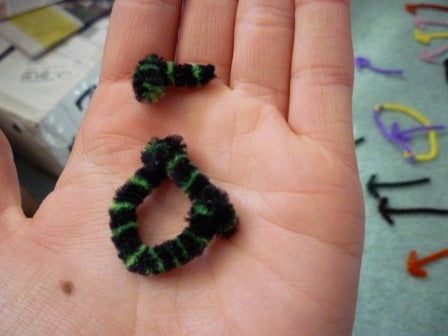 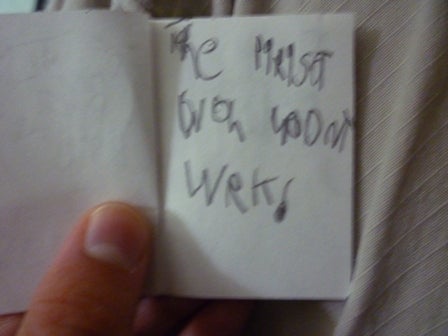 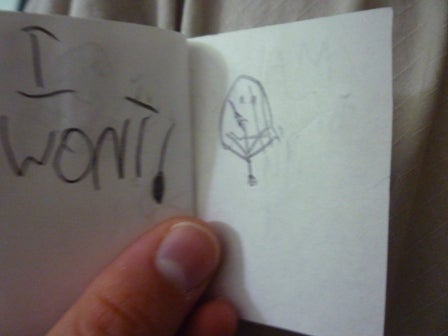 That is a parachute (regardless of how I spelled it at the time). Apparently, it didn't want to open. I wonder sometimes what I was thinking in first grade . . . This story doesn't seem to end in any fatalities, regardless of the parachute's stubbornness, but I also had a story in which a cat gave birth to kittens until she died from exhaustion (which must have been someone else's idea, I swear!) and a cat saving itself by killing a T-Rex, complete with vivid red marker blood spot where the dinosaur's heart would have been. O.O

On the bright side, I also wrote and illustrated a story in which a mother cat in lava boots rescues her son. 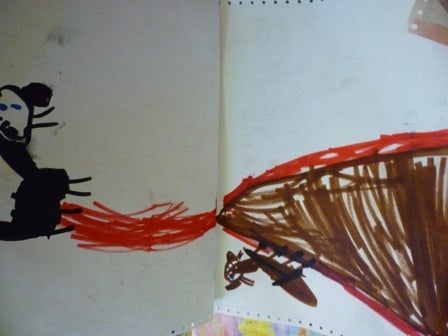 The black things on her paws are the lava boots. (Actually, there were many "cats in lava boots" stories, but I seem to have thrown the other ones away in my previous purges.) 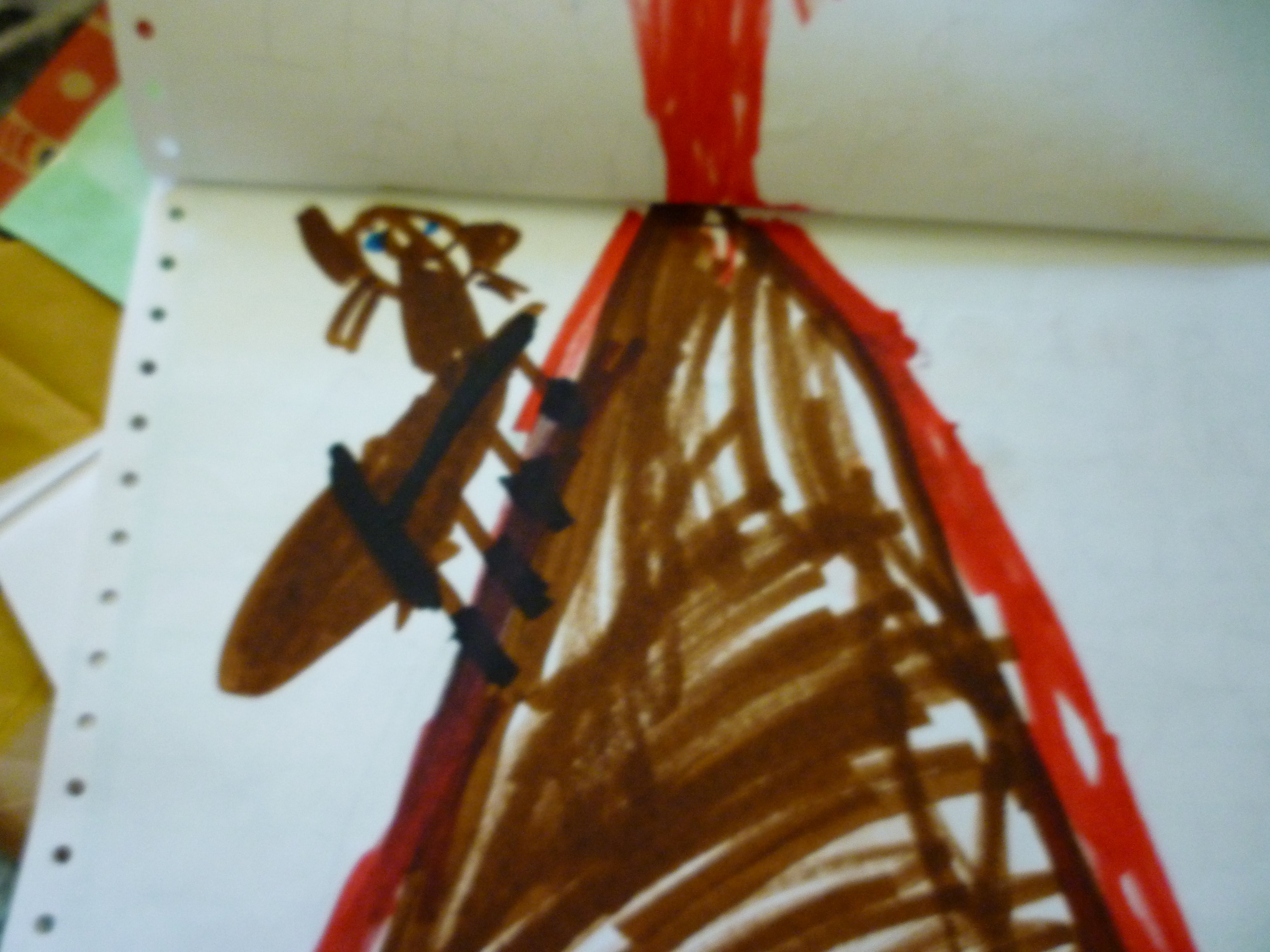 The beginning of an adventure story, circa third grade, featuring two of my favorite animals! I may not have been able to spell, but I was pretty eloquent: "plunged into the waves"! 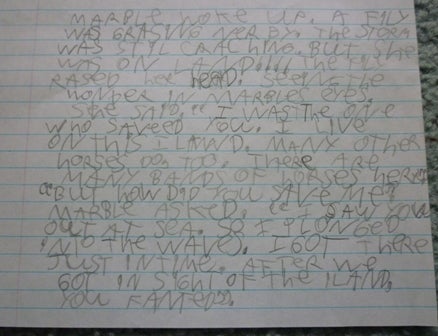 For a while, when I was ten or so, I played explorers with the kids next door, and I made us all Explorer Packets. These were ziploc bags with yarn tied to them so they could be carried over a shoulder, containing the following: a length of red craft yarn, a "procedure map" showing where we would meet at the start of each expedition, and a small "Help Packet" wrapped in cling wrap to make it water proof. This packet, when opened, revealed a quantity of brightly-colored slips of paper that an explorer in trouble could strew around the countryside in hopes of being rescued. 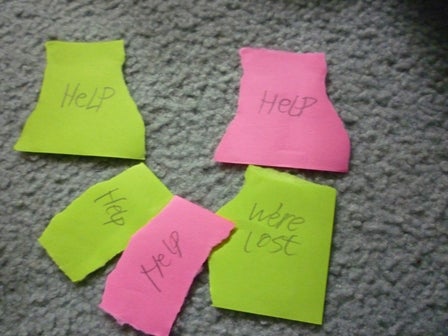 I loved the Calvin & Hobbes comic strip--loved it to pieces--and, during first and second grade, would create long works detailing Calvin's world. These were all written from Calvin's point of view and subtitled "a written report by Calvin" (or, rather, "a wraten raport by Calvin").

I loved making them. 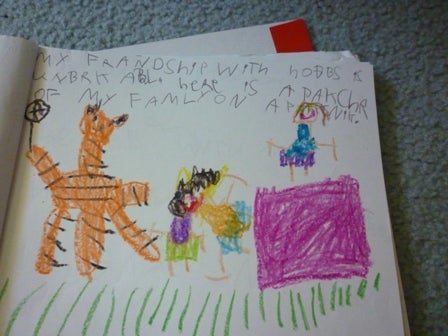 So I made more of them. 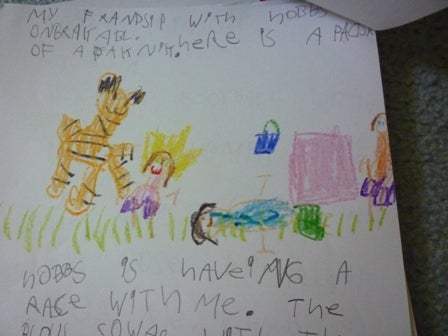 There was a lot of variation, but in certain sections I just seemed to do the same thing over and over again. 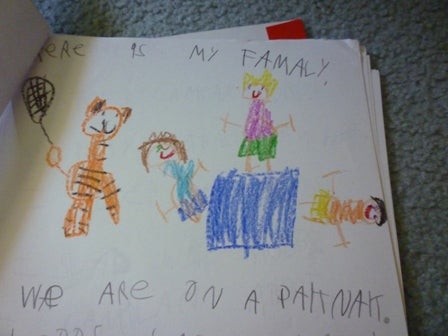 I guess I just really enjoyed doing it that particular way. 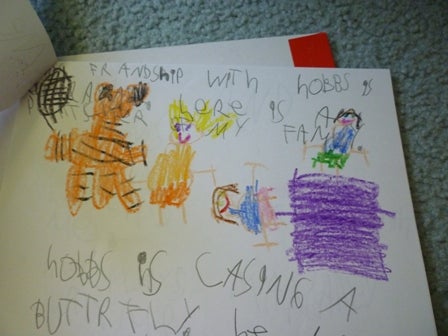 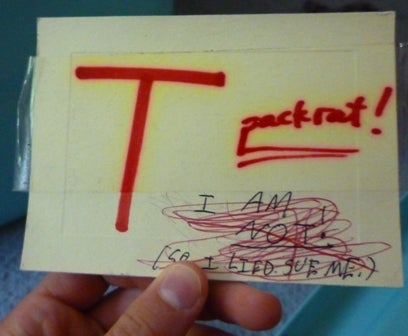 This was on my giant green Rubbermaid Container of Memorabilia, probably since I was nine or ten. The truth will out!

Now for the real blog:

In addition to silly photos of stuff I've found in my closet, I do have some real business. This week I will be presenting you with some of my definitions of important differences between similar categories that people often get confused.

Aries must have had a similar idea recently--see her blog for her breakdown of social stereotypes. I particularly like how she defines hippies vs. hipsters. (Personally, I find the "hippie" stereotype-people to be much rarer than the hipster-esque people, but more interesting, probably due in large part to the fact that I know zilch about indie music.) I, however, will focus on vocabulary relevant to the Science-Fiction/Fantasy Hall.

As Aries touches on, an oft-confused social stereotype at Oberlin is the division between nerds, geeks, and dorks. I believe I've recently read something similar on a webcomic--xkcd or Questionable Content, probably--that divided them up in almost exactly the same way as I do. That, however, as a red-letter event; I have hardly ever met anyone who quite agrees with me as to the precise delineations between the three groups. Here, then, is the Official Tess Yanisch Categorization of the terms, and you may take them or leave them.

Nerd--someone very smart and serious about being knowledgeable; studies a lot; traditionally, as a particular interest in math and the natural sciences. Carries connotations of slight social maladjustment and/or awkwardness. Modern connotation is much more favorable and less socially awkward than classical connotation. Classical image is of a weedy-looking teenage white boy with large glasses, acne, and a pocket protector, carrying a slide rule; modern image tends to be a teenage Asian boy with glasses and a calculator in hand.

Dork--while the negative connotations of "nerd" and "geek" have faded over time, "dork" still has a sting. As far as I can tell, a dork is a failed nerd/geek: someone who wanted to belong to one of these groups, or to appear so, but lacked the necessary knowledge to truly be accepted. Has all the trappings of geekdom but no real passion and no shared community. Sits at home half-heartedly replaying old video games. In fiction, becomes bitter and enlists as a supervillain's minion. Seems rare/practically non-existent in reality, as nearly everyone with a passionate interest in something can make a connection with people who will help elevate hir to the ranks of true geekdom.

On the topic of geekdom, there are a few different categories of "weird fiction" that tend to get lumped together:

Sci-Fi--diminutive term for "science fiction." However, many people consider Sci-Fi and Science Fiction to be two different things. Hard Science Fiction is theoretically possible and backed up by facts (Dune). Sci-Fi is corny and uses technobabble to achieve magical effects (Star Wars). Some people get very upset when these are mixed up!

Science Fiction--sometimes abbreviated SF, though this can also stand for Speculative Fiction (see below). More serious, or at least more scientifically rigorous, than Sci-Fi.

Speculative Fiction--an umbrella term for things that might happen, or could have been happening now, or could have happened. Includes Science Fiction (and, I suppose, Sci-Fi as well) but also other speculative genres: dystopian fiction, post-apocalyptic stories, horror, cyberpunk, steampunk, "science fantasy" (think Artemis Fowl and other magic/technology blends), and alternate history.

Dystopian Fiction--featuring a highly organized, cut-off society that's supposed to be utopian, but isn't. 1984, The Giver, the original setting of Ayn Rand's Anthem, The Handmaid's Tale. I haven't read it, but I think the series starting with Uglies has at least one dystopian society in it.

Post-Apocalyptic Fiction--something has happened and the survivors must, uh, continue to survive. Often set after a nuclear war or a meteor impact on the Earth. I read one once where an asteroid hit the Moon and it messed up the tides, volcanic activity, etc. From what I've heard, The Road is one of these. Slight overlap between this and Zombie Apocalypse stories.

Horror--scary! "The Call of Cthulhu" is the classic, or "The Birds." The War of the Worlds has elements of horror, though it's also science-fiction.

Cyberpunk--I'm not really clear on this one, to be honest. It began as grim, gritty, futuristic stuff. The example I hear most often is the novel Do Androids Dream of Electric Sheep?, which was turned into the movie Blade Runner, but I haven't read/seen either one yet. I hope this definition helps you if you have.

Steampunk--apparently began life as an split-off subgenre of cyberpunk. It's based on Victorian society and the notion that you can power anything with steam, up to and including computers. There are lots of dirigibles, steam-powered cyborgs, and petticoats. The movie version of The Golden Compass is somewhat steampunk, as is Sky Captain and the World of Tomorrow and the webcomic "Girl Genius." I haven't yet found a steampunk novel--it seems to be most popular in visual mediums, which makes sense, because everything looks awesome.

Alternate History--what would have happened if Napoleon had succeeded in taking over Russia? If Julius Caesar wasn't assassinated? If, in a land whose scrappy settlers have magical "knacks," British Lord George Washington finally decides he simply can't fight against Tom Jefferson's brave little band of rebels--and is executed? (That last is the setting for The Tales of Alvin Maker, a series I've just started.)

Fantasy--magic, real magic, must be involved (not science masquerading as magic; then it's science-fantasy or science fiction). The world should include mythical creatures and/or spellcasters. It's really rather narrow in comparison to Speculative Fiction. This also means that when Mom tells me I have to do ten hours of chores for every "fantasy" book I read, I can plow through The Tales of Alvin Maker and V for Vendetta and all the Ray Bradbury I want without having to do a thing.

One more paradigmatic example of steampunk: Warren Ellis's excellent comic, FreakAngels. Though there's no replacement for reading it in book form, you can catch it all for free on Ellis's website, here.

I was referred to this blog post by Ma'ayan, and may I say, an excellent breakdown of the geek/nerd/dork dilemma.

For another example of Alternate History, look at certain comic books such as Marvel 1602 (what if Marvel superheroes like the Fantastic Four, Dr. Strange, Thor, etc. had appeared in 1600s era Europe?) or DC's Red Son (what if Superman's spacecraft had landed in Soviet Russia instead of Smallville?).

Thanks for the reading suggestions,too. I loved 1602--Neil Gaiman is a genius--but I must track down Red Son! And I'll look into FreakAngles...