For a brief (lies, sorry) introduction as to why this blog is here, looking the way it does, check this post out.

Our Marvelous Chicago Shangri-la started early Saturday morning, when Obehave stuffed themselves and their bags into a Honda Odyssey and drove a short five hours to Winnetka, a northern suburb of Chicago. Matt ("Mom" for the week) was a champ and drove all the way eating nothing but raw spinach leaves. The house in which we are staying is owned by a very generous and hospitable Oberlin alum, and it's more than fancy enough for the six of us.

We have been staying up late, eating mostly home-cooked food, drinking a little, and seeing a terrific amount of improv in the last four days, and our trip is only about halfway over.

We spent the first evening in Chicago in Lincoln Park watching an improvised musical by the company pH Productions. It was a decent introduction to Chicago improv, although I was kind of hoping to be blown away by their musical stylings and wasn't. We sat in the van eating Chipotle and watching a ponytailed guy in a leather jacket eat a Subway sandwich before moving on to the Improv Olympic (iO) for their open improv jam. We sat in the audience for a while chatting and being nervous for our only performance in Chitown and our first performance not in front of Oberlin people. The show started with an opening act, as fate would have it. 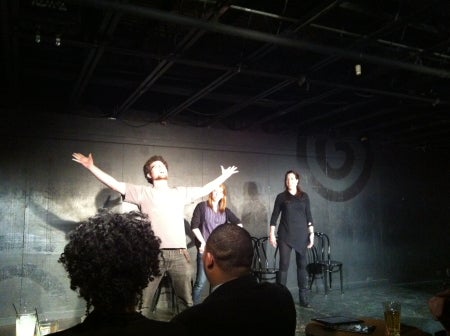 During this fateful first act of the night, a waitress came over to deliver drinks to some people in our group and spilled at least one full beer all over my coat, jacket, sweatshirt, and jeans. Magic. After getting a free beer and comp tickets from the embarrassed waitress, I settled back in my seat, still cold and wet, to shiver for the next 45 minutes. Fate, that shifty hobgoblin, had had his way with me again.

All the other members of our group had been up on stage already when I decided to stop feeling so sorry for myself and get up to try to have fun. I didn't really expect to do well considering how I was feeling. It was 1:30 or so in the morning, I hadn't slept too much the night before, and I was wet and headache-y. I got up anyway with Sam from our troupe and this guy from Chicago who seemed like he was a regular. We did a fun scene about a loose cannon cop McGarnagle (Sam), his boss, tired of his take-no-prisoners style (me), and McGarnagle's play-by-the rules partner Sanchez. At some point, the emcee would give the cue, a spotlight would appear on one of us and we had to give an Oscar-worthy speech. It was fun, I got a couple laughs, but mostly it was just a good time being on stage with these guys doing a scene. 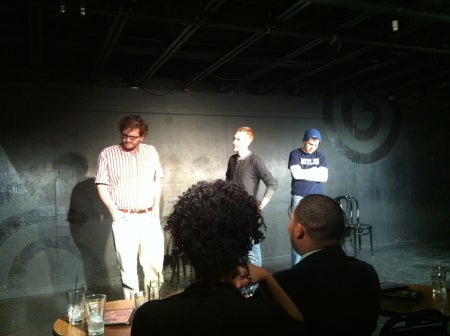 Since that first night, we've had a slightly mixed bag of shows, quality-wise. Every night we pack into the van with our juice boxes and drive to one of three theaters to see one or two shows a night. Each night we have seen at least one good or even great show, and some nights there's a just-okay show to go along with it. Our second night we saw a professional-wrestling-themed show by the up-and-coming Octavarius, complete with over-the-top speeches, championship belts, and shiny spandex. It was super-exciting, there were good guys to cheer for and villains to boo, and a real brawl at the finish. There was a moment when the guest star, professional wrestler Robert Anthony raised a metal chair and threatened to strike the hero, Keith Handsome, in the face, and adrenaline absolutely dumped from its quiet seat above my kidneys and into my bloodstream, until a half second later I felt like I had battery acid in my veins and gasped a mighty gasp. Anthony broke down, decided that Keith was "just too handsome," and gave up the chair to Keith, who actually did hit someone with the chair. Magic. 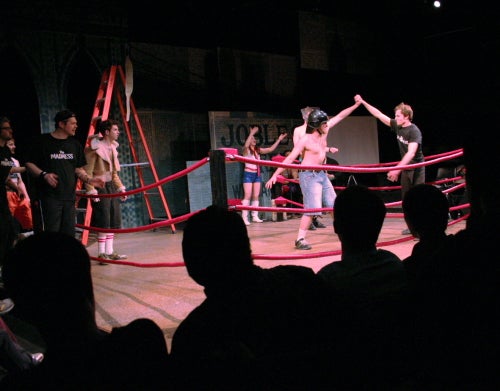 Since then, we've seen a sketch comedy show at Second City, which showed us the benefits and drawbacks of doing scripted material; a group of older improvisers at the iO who had been playing together for nine years called The Reckoning; a rather adult improvised puppet show called Felt; and TJ and Dave, two of the best improvisers I've ever seen, live or on video, together improvising an hour-long play every show. 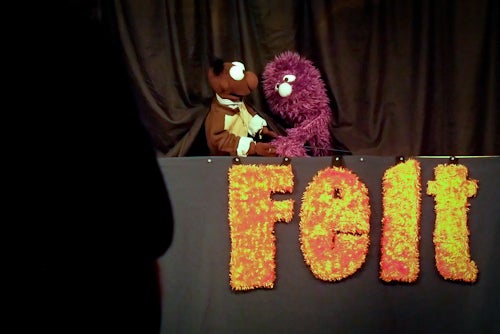 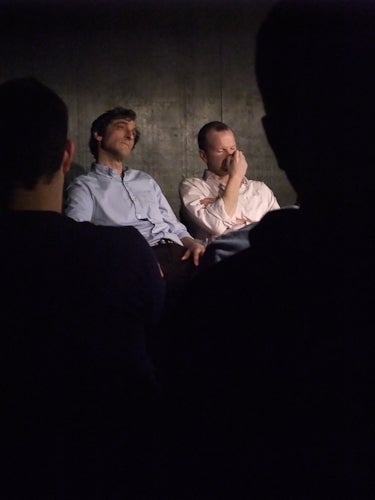 TJ and Dave. Magic. Not the sarcastic kind.

The bad shows teach you a lot, even if they aren't as fun to watch. You see exactly what doesn't work. With a really great show, it is often too magical to look at and objectively say exactly what is working and what to emulate to try to get better. In the other kind of show, you see people making mistakes that they have probably been told not to do, but are really easy to slip into. When you see it happen again and again in the course of a show, it's easy to remember not to do it when you improvise the next time.

Besides learning from watching crappy improv, we're also taking master classes while we are here. Yesterday (Wednesday) we spent three hours with three members of Octavarius, the group who put on the high-flying wrestling show we saw Sunday night. We learned games, warm-ups, and general strategies for rehearsing and making the best use of our time, as well as ways to make funny, strong scenes more easily.

In addition, I visited my high school friend Andrew at Wheaton College this week. Wheaton features a massive building, the Billy Graham Center, which houses a huge room, complete with glowing cloud pictures, mirrors on the floors and ceilings, and heavenly choir music playing at all times. More magic. 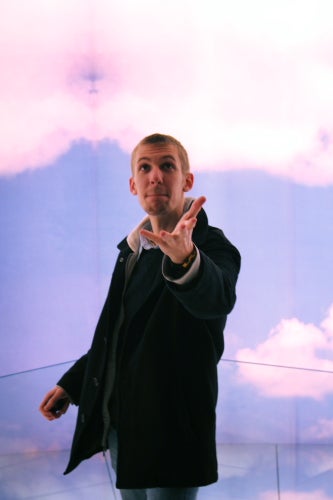 Matt: the Popeye of our generation.

I'm so glad you're part of the documentation of this trip.

Oh, Wheaton. That's where I grew up! I believe the Billy Graham center also has the wardrobe that C.S. Lewis contemplated while writing the Lion, the Witch, and the Wardrobe. We made a field trip to it when I was in elementary school, which seemed silly to me at the time.

HEy hey hey! you saw Hillfart eh? nice to read you are stepping up your game, I want to see a performance!

Yeah, and Andrew appears to be quite popular with the Wheaton ladies. Leave it to him to grow some facial hair and unleash the beast on the quiet, unsuspecting campus at Wheaton.