It is summer, and I am busier now than I have ever been in my entire life. None of my past summers have been this devoid of relaxation, so I understand if you don't think it sounds very much like vacation, but here's what I've found: college makes your life a wonderland of busy, and after a while, you learn to relax by being busy. It's a skill. Of course, by college I don't just mean classes, I mean anything and everything related to this stage of your life and the institution you're spending it at. For me right now, college is planning my next year (finances, activities, Winter Term, yay!), living in Oberlin instead of going home for the summer, reading more about things I learned in class and putting the lessons into action (conscientious cooking, yay!), writing for the Oberlin blogs, working for the Grounds Department, and working as a research assistant to my Environment and Society professor from last term.

So far, this experience has been remarkably like a katamari ball.1 Months ago, I had the vague idea that not going home would be nice since my parents are visiting family in Europe and I'd just be unhappily alone if I went back to Alabama, where the weather is constant death and most of my friends are far away. A little later, I applied for the Grounds Assistant position here for the same reason I did a work exchange for my Winter Term, namely that I like alternating intellectual challenges and manual labor.2 I wasn't sure I'd get the job, so I didn't look for housing until after I knew for sure I'd have a source of income if I stayed. Once that was squared away, though, I spent a few weeks in mounting terror of having no place to live - but that worked itself out thanks to some friends of a friend deciding they could use an extra housemate to split the rent with. So then I had a job, I had a house, I had all kinds of self-improvement plans for the free time I assumed I would have every day (hah!) - and I planned to write many blog posts, of course. (Fun fact: Will and I started twin blog-a-day projects on tumblr this past October, so my blogging pastime includes this as well. It is hindered slightly by the fact that my house does not have internet.)

All of this preparation sounds time-consuming, but at the time, I was actually devoting most of my attention to finals. It didn't hit me that everything was all planned out and ready to go until I was helping my friends move out and my Commencement Week roommate move in, at which point I had the realization that classes were, in fact, over, and that this was, in fact, quite irreversible. "Here I come," the summer was shouting, "ready or not!"

I got to stay in my room in Dascomb for Commencement, but by that point I had already packed and stored most of my belongings, so it didn't even feel like my room anymore. I spent most of my time in the Hales and Philips gyms instead with the rest of the commencement circus cast, figuring out how to rework the spring show with two-thirds of the performers missing. We rehearsed all week and put on an entertaining, if short, show the afternoon before commencement, all of which I found blissfully stress-free compared to the frenzied finals I had just weathered. I filled my spare time reading books, knitting mustaches, hanging out with my new roommate, and generally enjoying my relative lack of obligations. Alas, this was not to last. 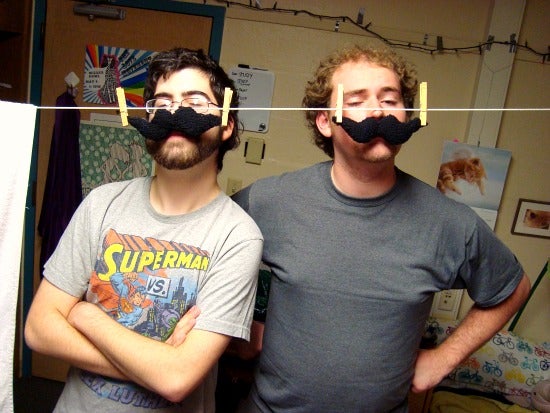 My friends Charlie and Joel, sporting mustaches knitted by yours truly.

I became suddenly, horribly busy as soon as my groundskeeping job started in the beginning of June. Since I apparently have the ability to spawn activities that soon mushroom into (over)commitments, this is not the first time in my life that I have thought, "Surely, it is not possible to be busier than I am right now," but this time I really mean it! At the end of every day, I realize that this day's productivity dwarfs that of any day before it, not only because my daily routine is now completely devoid of naps (they take more time than you'd think!), but also because I am getting more and more efficient at said routine.

Weekdays I get up at six and get to the grounds department by seven, where my three student coworkers and I size up the day's tasks and set about accomplishing them. I am fortunate enough that mulching and weeding for eight hours does not qualify as having a job that follows me home (unless you count the fatigue, sweat, and blisters, which I so wish I could I could leave at work), because this is only the beginning of my day. I have lots more stuff to get done.

The first thing I do when I come back at three thirty, sweaty already, is punch my way through increasingly more difficult strength conditioning workouts so that I will be able to apply to my friends' parkour ExCo in the fall without it being complete folly. When that's over, I look in the fridge/pantry and consider which options would provide me, as a de facto vegetarian, with complete proteins. My housemates and I have yet to settle into a grocery-buying and food-cooking routine that balances out, so sometimes we have unforeseen shortages that are teaching me to be flexible and creative in the kitchen. I'm even a relatively good cook! (Yes, mom, you're allowed to snicker now.) Once I have created hunger in my belly and satiated it, I sit my digesting self down and get my daily piece of bloggery out of the way, save it to my computer, and amble down East Lorain Street so that I can use the college's wifi to post it. The last thing I do between this and showering before my ten o'clock bedtime is lose myself in my favorite part of the day: flute. No matter what mood I start out in, the concentration that I slip into when I work on flute pieces always leaves me in a neutral state of mind when I'm done. It's a wonderful way to wrap up laborious days.

The more efficient I get at this routine, the more often I can slip in a chapter of a book (I've gotten through Minor Characters: A Beat Memoir, What Maisie Knew, Just Enough Jeeves, The Scribner Anthology of Modern North American Short Fiction, I Was Vermeer, Silent Spring, Stumbling on Happiness, and Diet for a Small Planet so far) or a letter here and there, but generally things like that are restricted to the weekends. One Saturday, I tried to answer all of the letters I had gotten in a week in one sitting, which is a very bad idea in hindsight. I managed it, but it took me many hours and my right hand was quite cross with me afterward. Since then, I've tried to space my letters out more, which also leaves me more time on weekends to dig around in the flower beds in front of my house, go to farmer's markets, bake obscene amounts of bread, do laundry, clean, fill up my sketchbook, and take care of everything else I didn't get to during the week. 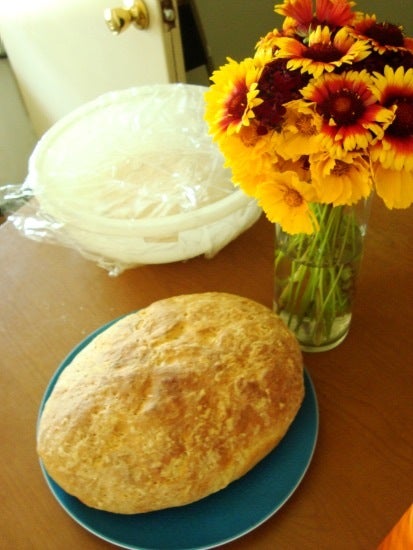 I made that bread! And I picked those flowers from the side of N. Main Street! 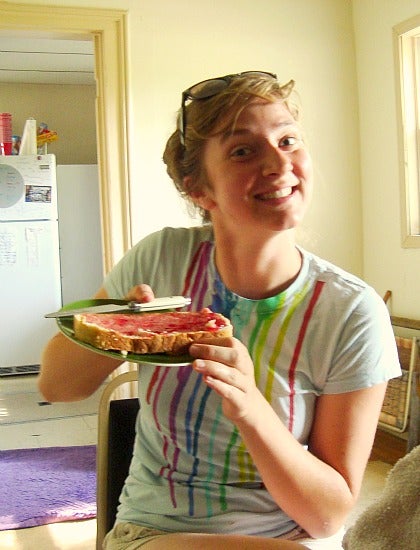 And then I ate that bread. Oh yes. I ate it with blackberry merlot jam from the Oberlin farmer's market, and it was so good. Photo credit: Sujoy Bhattacharyya.

Weekends are also usually the only time all of my housemates are home. The six of us have highly incompatible schedules, but we make an effort to cook and eat together Fridays and Sundays so that we can talk about bills and grocery money and other housekeeping issues. For me, it's also a good time to get to know the people I'm living with; they were all Barrows friends last year, while I almost never had cause to go to north campus, much less set foot in my rival dorm. Thankfully, they're a very welcoming bunch, and they have a great rapport that makes for highly entertaining dinner conversation.

I was talking to my vegetarian housemate about all of this the other day while sautéeing some veggies to go along with our quinoa, and it struck me that these are the things I have always told myself I would do every summer - read, write, make music, cook, and work out daily - and never really got around to actually doing. It is infinitely rewarding to finally be a busy person during my vacation, and if I hadn't stayed here with my three jobs to spur me on, I doubt I would have broken my habit of summer laziness. I'm very happy that Oberlin is letting me finally meet my goals.

At least, that's what I tell myself every Monday morning when my alarm goes off at six A.M.

1. The goal of the game Katamari Damacy is to roll around a ball that absorbs objects until the entire world has been rolled up. It gets very big very fast, which is pretty much how I feel about my level of busy.

2. One of the many reasons why I am an Obie: "Learning and Labor" is not only Oberlin's motto, it is also a combination that I thrive on.