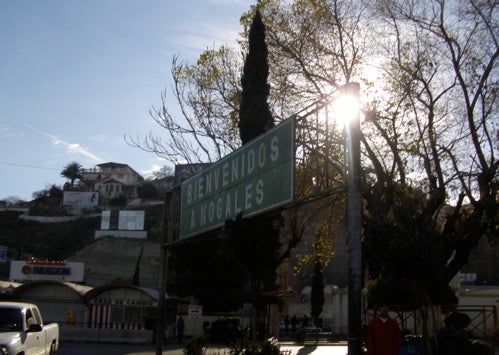 Turns out you don't need your passport to cross the border, only to return. We drove up to the ugly metal wall that divides Nogales, Arizona from Nogales, Sonora, told the officer we were going for the day, then cruised on through. There were no lines, a sign of how the increased drug war violence has led to a sharp dive in tourism. We then went to a station of Grupos Beta, a Mexican government organization that helps deported migrants by giving them food, clothes, a phone call and a couple of nights of shelter. We sat on metal benches outside and talked with a group of men who had recently been detained in the U.S. and shipped across the border. I talked to one man who had tried to cross four times, but now wants to go home, saying the attempts were a waste of time, money and his health. By far the saddest was Felipe, a man that had lived in Phoenix for 22 years, and one day the ICE (Immigration and Customs Enforcement) knocks on his door and drags him and his wife away, leaving a 13-year-old and an 11-year-old alone in the U.S. Then he was separated from his wife in the detention process and has yet to find her. One girl on my program lent him her cell phone to call to check on the kids, which he did, but we all left feeling helpless.

We then visited a center for deported minors, mostly 15- or 16-year-old boys, called the DIF. It was a brand new building, much nicer (apparently) than the ones in most border towns, but the kids were just sitting around, bored, waiting for a family member to come claim them. There was a paved outdoor area with a basketball court and room to run around, but the door was chained shut. Maddie explained that they were afraid the kids would try to escape. She said the only time the kids were allowed outside was while the DIF was filming a promotional video about what great work they do and how happy the kids are. There were also framed pictures all around the center of the governor's wife posing with kids (obviously models and not actual deported children) and pictures of kids frolicking on grass. There was no grass.

Lastly, we walked back and forth across the border to compare prices in grocery stores and discuss what those numbers mean. I'm an English and Latin American studies major, so I had a hard time wrapping my head around it, but basically, even though prices are "the same" on either side of the border, because of differences in wages there is a great inequality. An American has to work only half an hour to buy a gallon of milk, but a Mexican has to work five. This means thousands of people cross the border every day just to buy groceries in the U.S., then return home to Mexico. So American factories move across the border because of cheap labor and non-existent environmental regulations, and most of those wages go back to the U.S. to buy groceries. So much for the myth that the maquiladoras are boosting Mexico's economy. I look forward to learning more about this in my classes.

We rounded off the intense day with a delicious dinner cooked by our program assistant and a late-night ice cream run. Nothing takes your mind off dysfunctional U.S. policies like Ben and Jerry's.