My time in Buenos Aires is so far characterized by the gastronomic pleasure I experience with every breakfast, lunch, brunch, mid-day snack, coffee-break, dinner, and dessert. I've been eating a LOT, exercising little, and appeasing my host father, a terrific cook who gets offended if I don't ask for at least seconds. Like the first third of Eat, Pray, Love (an okay book and worse movie), my experience in Argentina is an endless montage of a white woman stuffing her face in a new country. After two months, my skinny jeans fit a fair amount tighter around the waistband, a happy sign that I have conquered many an empanada, choripan sandwich, and dulce de leche stuffed alfrajor.

Obviously, after only 8 weeks I still know very little but I do a lot of eating, learning to cook, and talking about Argentine food, and these are the main food groups I've encountered:

Pasta
There's a heavy Italian influence on Argentine cuisine, and with pasta being cheap and easy to make, it's one of the most common foods. There are plenty of shops selling freshly made pasta and Porteños usually have it one meal a day. One custom that I love is the "Ñoquis del 29." Based off the story of Saint Pantaleón, it is tradition to eat gnocchi on the 29th of each month, to bring good luck. Almost every Argentine I've talked to participates, including my host family, and without understanding the cultural context, it seems like a totally random custom. Why gnocchi? Why the 29th of every month? What happens in February?!

Meat
My diet at Oberlin, where I eat in a food co-op, is 90% vegetarian, and when I do eat meat, it's in a late night burrito. Very few Argentines are vegetarian; this is a country that celebrates its carnivorous traditions. My host parents explained to me that unlike the U.S. meat industry, animals in Argentina are raised in the countryside with space to roam, a normal diet, and no growth hormones, which accounts for how flavorful the cuts of meat are. 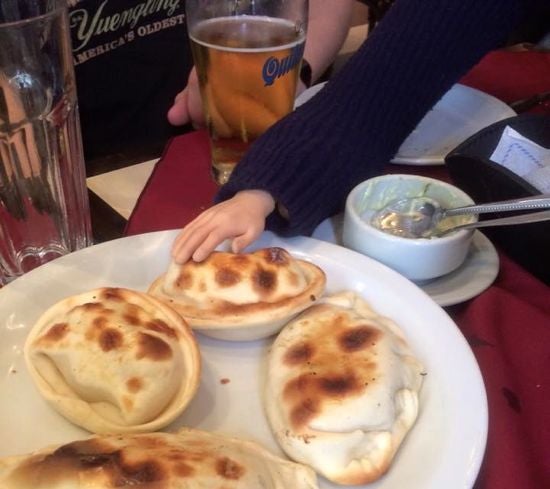 Coffee
I've always assumed I would grow into that adult who proudly doesn't drink coffee. Like I imagine grown Esther having to go to work after being up all night with a screaming infant and "nope, just a cup of Earl Grey for me, please." Thankfully, after many years of fervent hatred for the taste and its effects on my body, the coffee-less era of my life is over, because the coffee here is good. After spending many hours in the cafés where I do my homework, I boldly took the first step and ordered my first café con leche, and nothing was the same again. What used to make my hands shake and hurt my stomach now gives me LIFE. Coffee, I <3 U. 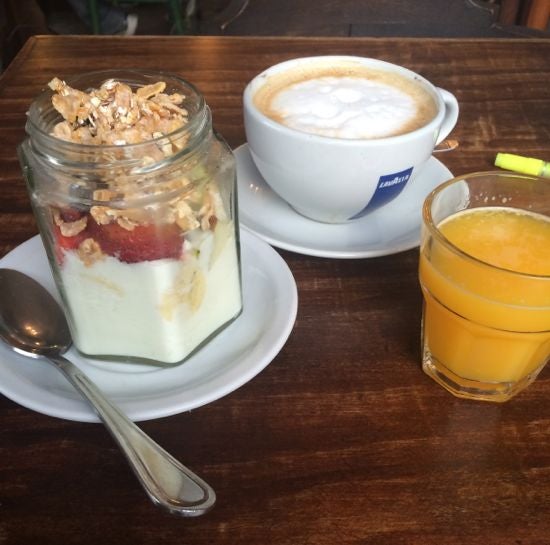 For less than five bucks at my favorite study café, I can get a café con leche, glass of fresh-squeezed orange juice, and yogurt with granola and fruit. An absolute bargain, I say!!

Wine
Argentina's drinking age is 18, which means I can partake in its extensive wine culture. Argentina is known for Malbec, a red wine made from grapes grown in the high-altitude foothills of the Andes Mountains. Whenever I eat lunch or dinner with my host family I can expect a glass of vino tinto and maybe a lesson from my host father about the national production of Malbec and why it pairs just so perfectly with steak. Before coming to Buenos Aires, I knew absolutely nothing about wine, and it's been fun to play Junior-sommalier-- smelling my glass before I sip and trying to describe tannins.

Dulce de leche
When I was around 11, I tried to make my own dulce de leche, an eight-hour process of slowly heating sweetened milk. After that attempt went horribly wrong, even the thought of dulce de leche would make me nauseous, and I never touched the stuff again. But, as the national food of Argentina, it is unavoidable in Buenos Aires, and I've come to like it again. It's an ice cream flavor, spread on toast, stuffed into every pastry imaginable, eaten with fruit, and part of any healthy breakfast, lunch, dinner, or dessert. I'm not quite on the level of my host father, who will sneak a spoonful straight from the jar, but I suspect when I leave Argentina I'll be smuggling a few months worth of DDL in my suitcase. 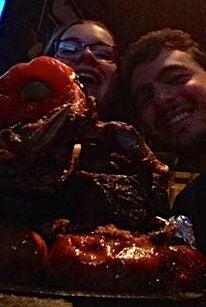 My friend and I behind a literal meat mountain in Montevideo
(photo courtesy of Jacob Karlin).