Given my recent activities - teaching a circus arts Exco, producing a circus show and organizing OCircus - it seemed easy to decide my Winter Term project. Right now, I'm in Seattle, studying at SANCA, the School for Acrobatics and New Circus Arts. To put it succinctly, this school is going to kick my ass.

One of the purposes of Winter Term is to give Obies the ability to use resources that the college can't provide. My first Winter Term, I went to Hawaii to work on my godparents' orchid farm and learn about permaculture. My second year, I lived in Guadalajara, taking 4 hours of Spanish classes a day and living with a Mexican family. Last year, I split my term between home and Oberlin, working on an independent writing project. Over the last few years, I've spent more and more time working on OCircus and need more guidance, both in terms of skills and experience. Though learning from one another is valuable, it's also good to have the perspective of a professional from the field - someone who can be a mentor.

SANCA was founded by a professional rigger and a nurse, five years ago. Chuck, the rigger, had gotten into gymnastics rather late in life, using the muscles he built as a construction worker/stunt double. He started teaching acrobalance informally, and one of his students got a bright idea. Jo, an inner-city nurse, was noticing higher rates of childhood obesity, and few cures. Circus was a non-competitive, but very physically intense activity - wouldn't it be great to start a school, open to all ages and backgrounds, to build confidence, skill and strength through various circus arts?

These days, SANCA is run by about sixteen teachers, five of whom are Oberlin alumni. Besides teaching classes, they do outreach in middle schools throughout the greater Seattle area. As we have a really strong connection here, SANCA designed a special 3-week intensive course, just for Oberlin students. We're taking a three-hour classes each day, shadowing/assisting in other classes for five hours a week, and we can attend any additional adult classes with spaces open.

Class is hardcore. We spend about a half-hour doing warm-ups: jogging, stretching, dancing, moving, and then move on to skills. We've tackled crazy jumps on the trampolines, climbed rope, twisted around the aerial silks, walked on a tightwire, run on a rolling globe, hung on the trapeze and a German Wheel, as well as juggled, balanced, and tumbled. For three hours, with about four ittie-bittie breaks. I can genuinely say it's the most physically intense thing I've ever done. I love it.

After class, the priority is simple: food. Protein, in particular, as so much of the activity is anaerobic. Yesterday, my class got lunch at Stellar, where the pizza really was... stellar. It was really great to just sit back and eat tasty food with people I'd spent hours sweating around. After lunch, I shadowed two youth classes. Phew. Running after little kids isn't exactly exercise, but it is exhausting. Watching the nine-year-olds do things that I can't is particularly humbling. One of the little girls was an incredible gymnast, excelling at aerial rope tricks, her long blond braid dangling into the rope.

The little kid group I had afterwards was adorable. At first, I had trouble spotting handstands because their hips were so far away. Even so, they all high-fived "Coach Aries" at the end. I am a rock star to four-year-olds.

After five and a half hours of circus, adult acrobalance class was... difficult. After doing head-stands for the second time that day, I wanted to curl up in a ball and nap for hours. Exhaustion aside, I learned a lot.

A bit of terminology: acrobalance is the art of two or more people manipulating each other through space. If you've seen a human pyramid, or a piggy-back ride, that's simple acrobalance. One person is the base, who stays in contact with the ground. The base moves the flyer in complex and fairly precarious positions. Generally the lighter person is the flyer; however, the moves are more about physics than strength. A small flyer can still support a larger base, but it's a lot harder. 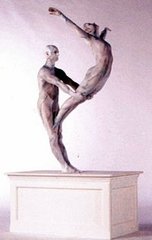 One of the coolest things we went over were two-highs, where the flyer stands on the base's trapezius muscle, while the base grips their legs and presses down with their head. If all goes right, the flyer is locked in, totally safe, five feet above the ground. A good base can walk around with their flyer. At the end of class, I got to base a two-high, resting the co-founder of SANCA between my shoulders.

Right now, my entire body aches. My neck is afire. My rhomboid is iffy. My thighs are confused. My biceps are in agony. This is perfect.

hi, im going to the art institute of seattle and i spin fire for fun.. and for one of my projects were supposed to pick something that we've always wanted to do.. i want to get my fire licence, i called the fire dept and they said i would ahve to wait till fall to get into the class but it seemed like it wasnt the one i wanted...
do you know how i would go about getting mylicence in 8 weeks??

This program sounds amazing! It seems like Winter term opens the door for many interesting opportunities. I ride the unicycle and have always had a semi-secret dream of learning how to be in the circus. Therefore, I thought it was incredibly awesome that Oberlin has its own! I have loved reading this and other Oberlin blogs--they are very successful in capturing the lifestyles and adventures of different Obies. I am super excited to visit for the second time next week!

If you want to join the circus, Oberlin is great! We always love more unicyclists -- we'd love for you to perform for us. If you'd like to drop me a line to talk about anything circus when you're on campus, I would love that: