"It must be Thursday," Ben said. I poked my head up from my straddle-stretch and saw most of my classmates taping their wrists and putting leg braces on their ankles. We were getting bedraggled, after countless handstands, cartwheels, and rope climbs. Yet as the weeks wound down, we got closer and closer as a group. In class, we were taught not to be competitive. We were never set against each other -- we were partners, coaches to each other. Afterwards, I didn't feel jealous or inadequate towards my peers. It made it easy to be friends.

At the beginning of the month, we had class, ate lunch together at some local restaurant, and then split up, either to shadow classes or to wander Seattle. It wasn't a very cohesive group -- outside of circus, we didn't have so many similarities. Some of us were extrovert-dance-party-dance people, others were more... chill. When we went to an arcade, I forgot that not everyone likes shooting zombies, playing pinball, and rocking out on DDR. I believed these were intrinsic "good things," like sunlight and cotton candy. It seems that not everyone enjoys large dark rooms with flashing lights, violence, and loud noises.

But as the weeks went on, we gelled. There were circus parties on Saturday, Tuesday, Wednesday, and Friday with dancing, massage circles, cooking, and games. Part of getting good at various circus skills is learning how to hyperextend your shoulders, arch your back, and make your abs hard as stones. Games become absurd and physical -- flexibility tests involving a broom, a push-up game with beer bottles, a bending game with a paper bag, and tipsy handstand contests. We did the things you aren't supposed to try at home.

On Thursday, we got in to see Teatro Zinzanni, a lavish dinner theater circus. Through school, we got a massive discount so the whole class and four teachers went. Teatro Zinzanni is a real-life Moulin Rouge, the stage and seated areas overlapping with mirrors, red velvet, elaborate costumes, feathers, glitter, and hats. The acts collide with a 5-course dinner, with acrobats doing flips off the tables, and the dinner plates being spun.

Though we were sitting in the outer ring (yay, discount!) we still saw an amazing show. The highlight was Les Petits Freres, three incredibly skilled acrobats with a great slapstick routine. Their finishing move was a three-high (person on another's shoulders, on another's shoulders) that they got into from lying down. The whole circus-school crowd, squashed into two booths, erupted with applause. We stood, cheered, and didn't sit down. After weeks of practice, we all knew, in every tired little muscle, how hard that move was. 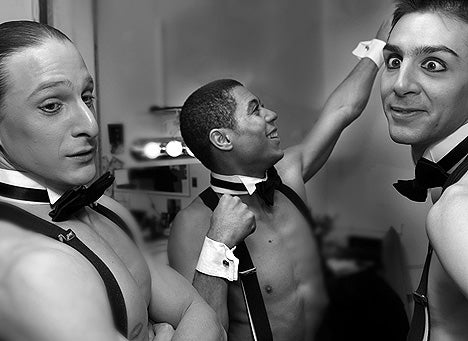 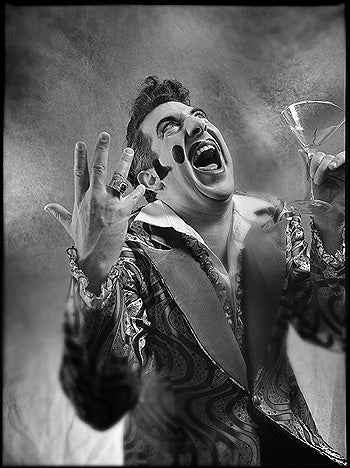 Audience participation was integral to the show. The maestro, Chef Caesar, pulled up a number of people, mostly women, to flirt with. But the big deal was when he needed a replacement and needed to find "three virile men" to choose from. Our group all pointed at Terry, one of our teachers who's a really gifted physical performer. He's Charlie Chaplin, if Chaplin could do aerial rope. We pointed at him, cheering. Except rather than Terry, the "Chef" winked at Yoshi. Yoshi, your narrator's boyfriend, was one of the selected.

The other two guys were big, all-American boys, blue-eyed and straight-haired. One was big and manly, the other was young and manly. Yoshi is 5'3'', slim with long hair and a goatee. The odds seemed a bit stacked. "Chef Caesar" serenaded the two other guys first, cooing over their bulging muscles and masculine charms... then approached Yoshi. I waited for the seemingly-inevitable barrage of short jokes.

Instead, Caesar started singing Jesus Christ Superstar. He finished a few verses of the theme song as well as "I Don't Know How to Love Him." The host hugged him, yelling, "You're back! I'm so glad you're back! Baby, baby Jesus, you sacred stud!" In the audience, the circus crowd exploded with laughter. Yoshi isn't a very Jesus-like guy. He's a neuroscience major from Texas.

In order to win Caesar's crown, the three guys had to dance to "She's a Lady (Woah, Woah, Woah)." The game: every time Tom Jones sung the word "Lady," the man would have to point to a lady. While looking sexy. The first two guys went up, one by one and did an okay job. In the back, one of the waitress/performers gave Yoshi two pieces of advice:
1. "Take it off."
2. "Show them that Jesus could dance."

And Yoshi did. We've been doing dance warm-ups for the past 3 weeks -- both modern, ballet, and hip-hop. Yoshi served it up, stripped off his jacket, and pointed at ladies. The crowd crowned him victor and he got a little medal that said WINNER!

The next day, we had our final performance of "Look what I learned!" with individual acts and a big group number. Given none of us knew any of this before, it was amazing how much and how fast we had learned. Some of the others in the group excelled at one thing or another: rope, tightwire, trampoline, acrobalance, etc. For me... I didn't find a specialty, but I did find an area to improve in. For two weeks, I was scared of the trapeze. I couldn't get the most basic move, the "basket hang." It's not complicated, but I don't like holding myself upside down. Sticking my butt over my head is different from most other things in my life. But after I nailed the basket hang a few days ago... I got less scared of the trapeze. So, I made a short routine. Three of our coaches gave me advice on form and taught me some new moves (mermaid! bird's nest!). I shook out my newly-calloused hands and put on a little act.

We finished up with a few pyramids, doing slapstick-style interludes. The best was the "running man" number. Two duos stood face-to-face, grasping the other's wrists, making a little square platform that someone could balance a foot on. Or he could pantomime running a marathon, a la Prefontaine, with the duos whistling the "Chariots of Fire" theme. Then, we had a picnic lunch, did more handstands, went to a contra dance, and had a party.

This has been the best Winter Term I could imagine.

Always wanted to know more about OCircus. When is your next performance?

The Big Show is May 1st, 2nd and 3rd. We'll also be doing small showings at Beltane and a few other events.

Also, going to circus school will make TGIF so much cooler. Ha.