I'm really, really excited to share my Winter Term project, which involves my two favorite chordophones (instruments that produce sound with strings). This piece captures a bit of what I'm feeling and was actually the inspiration for my project! Here is the first movement of Osvaldo Golijov's Air to Air.

To begin, let me tell you a love story. It started four-ish years ago when I, as a young freshman cellist, was foaming at the mouth to see Yo Yo Ma and his Silk Road Ensemble LIVE. Like, Yo Yo Ma was in the hall and the vibrations his cello was making were interacting with air molecules that were RIGHT NEXT TO MY EARS (which were in the back of the auditorium, but no matter).

The ease with which the ensemble members - representing a wide range of instruments, from a Chinese pipa (lute) to a gaita galega (Galician bagpipe) - communicated with each other and the audience is something I remember with clarity to this day. Their collective sound, sometimes as homogenous as silk, sometimes layered with all the intricate detail of a Persian rug, enchanted me. After their first piece, it wasn't about Yo Yo Ma anymore (though my eyes still eagerly tried to glean technical secrets from his slightly-larger-than-microscopic figure).

The magic struck me full-on about halfway through the concert. The piece was in four movements and the first (linked above) had a break in its intoxicating momentum for a solo by a strange instrument. It was about a foot and a half tall, and played while sitting on the ground. It was bowed and held slightly like a cello, but sounded like the violin's breathy, ancient grandfather (as I found out later, it kind of is). Its voice was heartbreakingly beautiful. For the rest of the concert, my ears searched out that sound, and I applauded Kayhan Kalhor's solos with the same fanaticism I did Yo Yo's.

I later discovered that I had fallen in love with the kamancheh, the Persian spike-fiddle. Its name means "little bow," making it one of the oldest still-performed bowed instruments, and therefore, my cello's sort-of great-uncle. I loved it from a distance, raving about what my friends called the "gourd-on-a-stick" and ardently listening to the Silk Road Ensemble CD on repeat. I thought, Wouldn't it be cool to play that instrument? but that was as far as that train of thought went.

This past summer, the kamancheh sound was still running through my head. I was infected with a strange end-of-summer, beginning-of-college sense of freedom. It dawned on me: Oh. I made Money from Real Music Jobs. I am independent. I will be in college. I can fulfill all my deepest desires! The world is mine! (Of course this misguided feeling disappeared very quickly.)

So, back in October, after aggressively stalking Ebay for months, I gave myself a kamancheh for my birthday. It lived in my instrument locker with my cello and sometimes came out to play in the practice rooms. For the past few months, I could be seen wandering the Con with a cello and kamancheh on my back like a very strange, very clumsy turtle (I have since perfected the art of multi-instrument transport and reduced my collision rate by roughly 83%). Anyone walking by my practice room probably heard what sounded like some really amateur, Pre-"Twinkle Twinkle Little Star" violin playing as I tried to teach myself from YouTube videos. I learned enough to play "Twinkle Twinkle Little Star" with some proficiency, but not enough to say that I really played the kamancheh. I wished I had a teacher, if just for a month...

You can probably guess what my Winter Term project is, then. 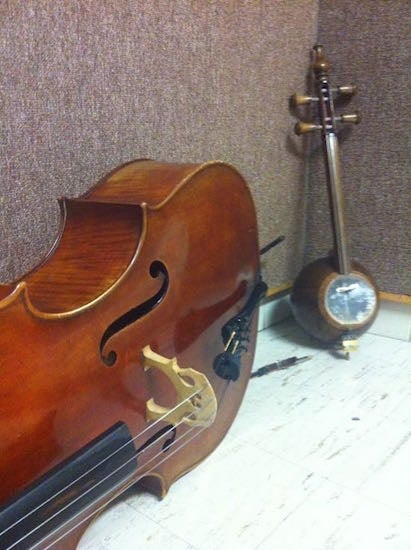 Kamancheh on the right. Beauties, aren't they?

Actually, my project officially consists of two half-projects (rather than spending 6 hours a day on one endeavor, I spend 3 hours each on two): one a practice intensive for cello (I couldn't bear to neglect it), and the other an in-depth study of Persian music with a focus on kamancheh. Because I could find no kamancheh teachers in the Midwest and just a handful on this continent, setting the study of kamancheh as my sole goal would have made it difficult to meet the official requirements of a half-project. Instead, I'm annexing the entire Persian music section of the Cleveland Public Library to create an annotated bibliography. In addition, I'm having three kamancheh lessons from a UCLA ethnomusicologist and kamancheh player via Skype. So, in a nutshell, I'm immersing myself in the literature, theory, and experience of the Persian musical tradition while keeping up with my own.

Winter Term, as advertised, is great. One of the suggestions offered when trying to come up with a project was "Do something you have always wanted to do, but never had the time or means to," and I'm excited to do just that with my kamancheh. It's my hope that I'll grow as an all-around musician over the course of this project as well as learn enough of the kamancheh to continue on my own. I'm curious to see where the Western and Persian musical traditions correspond and contradict, and whether my two dear chordophones have more similarities than differences. I'll be back with observations at the close of this chordophonic quest!

About the music: Please forgive the excessive, emotive nerd-ing in this post. But, then again, this is great stuff to nerd about. Listen to the recording, fall in nerd love, then come nerd with me. You won't regret it. Anyway, this first movement of Argentinian composer Osvaldo Golijov's Air to Air is entitled Wah Habbibbi ("My Beloved"). The entire suite came from the inspiration the Silk Road Ensemble itself provided as a group of international musicians from different musical traditions; Golijov himself describes it as "music borne from community." Of Wah Habbibbi, he says, "It is a blurry changing frontier between Christian and Arab music, where one note or inflection can make the music Christian or Arab." The plaintive voice of the Galician bagpipe opens the movement, and the whole ensemble soon moves into successive juxtapositions of almost aggressively energetic contemporary music with a sacred song (on kamancheh). The energy from this group and their music is contagious. Listen to more here or here!