Zoë graduated this May, and she was formerly the Oberlin blogs representative of the Chinese Students Association, b.k.a. CSA, which is the Chinese cultural (as opposed to political) student group on campus. So I'm picking up where she left off, just in time for the first few weeks of school, when we usually ensnare a crop of freshmen into our loving, cultural arms. Let me tell you, this is one friendly and delicious trap you want to fall in. 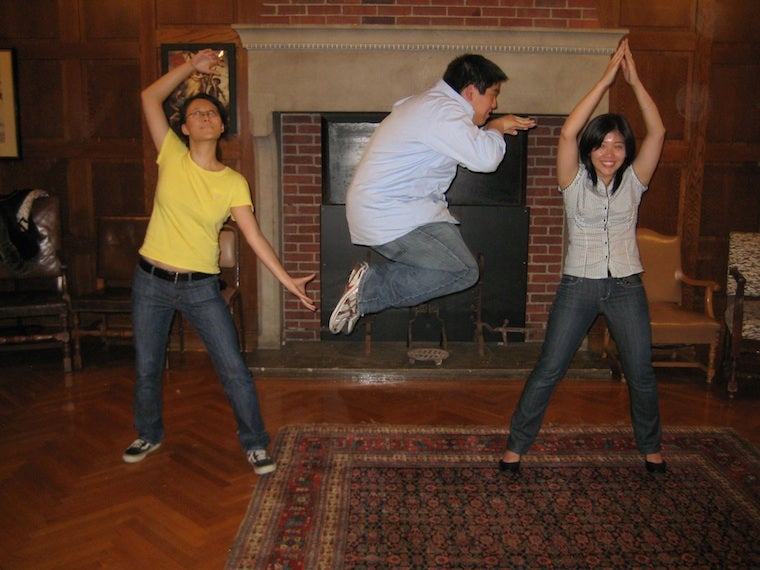 It took us several tries to get this picture right. I grabbed Terry's butt in the picture before this one. Photo courtesy of Vicki Wang.

Three years ago, I was the one being ensnared. We didn't have a lot of people with Chinese heritage back in my southeastern Ohio high school, so when the co-chairs at the time, Vicki and Priscilla, introduced the group at the Asian/Pacific American welcome dinner during the first week of school, I signed right up, hoping that I could find some of my roots with a group of people who were as interested in Chinese culture as I was. And what I unearthed was even better than a magical potato.

The best part about CSA is that it's really more of a family who throws awesome parties that happen to be cultural than just a student group that puts on events. In addition to community events, like our Chinese New Year banquet, our Moon Festival gathering, our Asian pop night at the Sco, and our lion dances, we also do a lot of group bonding, both intentional and unintentional. My freshman year, during finals week first semester, I ran into Vicki in my usual study area in Asia House. We were both really burned out, and I happened to have a box of clementines, so we had a clementine eating contest as a study break. I woke up the next day with a horrible acid stomachache, but this bonding experience with Vicki lives on in my mind in citrusy glory. 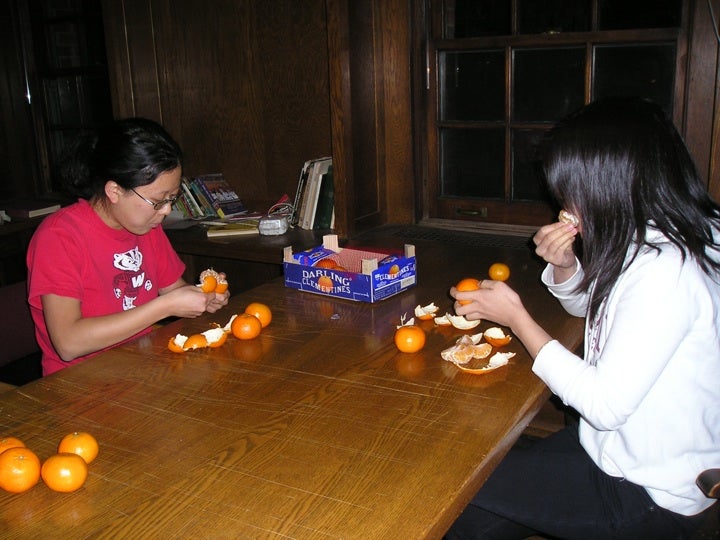 Vicki creamed me in this competition. The trick is to split the clementine in half before actually peeling it. Photo courtesy of Zoë McLaughlin.

My sophomore year, we watched an awful kung fu movie once as a group. And for the past two years, we've eaten hot pot together at the end of the year. We also go to Cleveland to eat dim sum at least once a semester.

We've got a reputation of loving food too much, so this year we want to spread out the types of events. In addition to our usual food fests, we'll try to get more cultural speakers or workshops on campus. We might also hold some cooking workshops because we love food too much.

I met so many of my favorite people through CSA: my sophomore year roommate, Juliette; my Oberlin mother, Vicki; the CSA heartthrob, Nick; the list goes on, and you're going to probably get sick of me dropping names, so I'll stop. 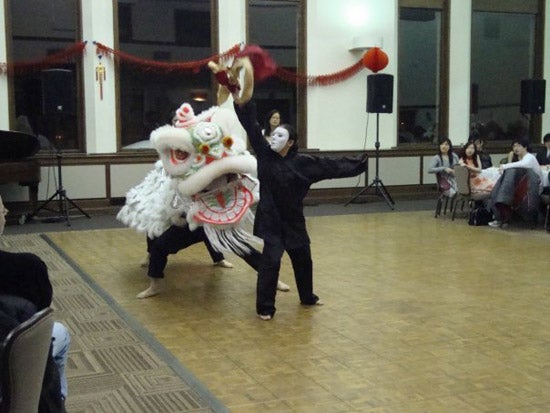 Anrey and Terry in the lion, with Zoë as the Buddha, from our 2010 Lunar New Year banquet. I'm the teeny head in the back playing the drums. Photo courtesy of Zoë McLaughlin.

You'll probably see us on campus holding inspirational recruitment posters sometime soon. Come check us out if you're interested in Chinese culture! And don't think that you can't join if you don't have Chinese heritage or if you don't know anything about Chinese culture. That's the point of joining. We've got Chinese international students and Chinese-heritage students, but one of our current co-chairs is of Korean heritage, and we've also got students who take Chinese language in CSA. I've gotten to try so many new things, like drumming for the lion dance or learning how to make a Chinese kite. CSA has taught me so much about traditional Chinese culture, Chinese culture in other countries, like Singapore and Malaysia, and Chinese-American culture. (I also have gained more of an appreciation for Chinese pop music. It's very danceable stuff.)

So yeah, make this magical potato a part of your Oberlin stew.

What?! A clementine eating contest? I want to be involved!

Also, the first photo is totally freaking sweet. You guys are clever.

Just came across this post after reading your most recent one. Ahahaha, I will always remember those clementines!
Congrats Sophia! Hope to see you soon!