I know you've been waiting for this. The conclusion of our Chicago saga, our 'Chicaga,' if you will. The homework and studying I had been neglecting while away in Chi-town took me by surprise when I came back to school, and I spent this week working on a beast of a Physics problem set and studying for a beauty of a Epigenetics test. Although it's been a week since many of these events took place, I like to think that the memories still stand, pure and unadulterated by the effects of magnetic fields on charged particles and sex determination systems in nematodes. If not, things could get weird here.

(n.b. If you have no idea what all this 'Chicaga' nonsense is about, I'm writing about our improv troupe's trip this Spring Break to the City of Wind. You can get your feet wet with an introduction here, or jump right into the fun stuff here. Just take your shoes off first, please.)

Thursday morning came much too quickly after Wednesday night for the Obehave improv collective. I guess it showed, since one of the first things Jonathan Pitts asked us when we met him at noon for his three-hour master class was, "Have you gotten any sleep this week?"

Jonathan Pitts' class was a blast. It was fun to do, exciting to take part in, and a helluva lot to learn in three hours. He would say things that were so profound, see us scrambling to write them down, and say "Make sure you credit me with that quote. It's Pitts, with two T's," then laugh. We could hardly take it all in. One great thing about spending time with J-Pitty (a nickname I just made up. Feel free to use it when you see him) was hearing about the Chicago Improv Festival, which he co-founded, and the Chicago Improv Festival's College Improv Tournament, which you may have had some exposure to here or here in Tess' blog. It's meant to be a celebration and a festival much more than a real competition, and seems like a great time no matter how the competition itself turns out.

The instruction he gave us was quite different than your normal teacher-student edumacatin'. He showed us how to listen actively to each other, taking in everything the others said, how they said it, and what they didn't say. He asked us questions like "Did you see what he did with his hands? Now, did your character see it?" We made scenes that were funny and honest, some weird and some very mundane. We went places we couldn't have premeditated or written, and had fun the whole time. He was a bit of a Zen master, now that I think about it. Also very warm, funny, and personable. Maybe he was more of a "Zen Mother."

After gushing in the van about "Pitts" the whole ride home, we spent the afternoon hanging out, some of us writing, some talking in the kitchen, some playing improv games. We munched on great tofu fajitas for dinner courtesy of Megan, and headed out to see more improv. Susan Messing was on the itinerary that night, in her two-person show, 'Messing with a Friend,' where she performs every week with a new 'friend,' a guest improviser whom she hates! Just kidding. She was crass and vulgar at times, rough and tumble other times, and funny all the time. She also took the time to talk to a bunch of improvisers from a tiny school in Ohio after the show for like 15 minutes, which was treat.

Our final night was going to be one of the most jam-packed nights of all when we left the house. First up was Improvised Shakespeare at the iO Theater. We assumed that the men, dressed in breeches and tunics would be doing an improvised version of a well known Shakespeare play, but no. 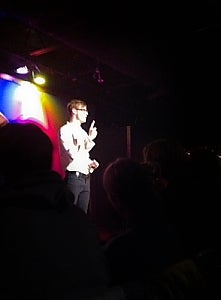 This guy gave a great improvised poem-introduction at the top of the show. Think
Puck's speech at the beginning of A Midsummer Night's Dream with swear words.

The bestockinged fellows all came onstage at the top of the show, one stepped forward, and announced that the six of them would be improvising a play in the style of William Shakespeare, and that the title would be supplied by the audience. An audience member shouted out "Julius Squeezer!" and the play began. It turned out to be an hour-long, two-act play very much in the style of Shakespeare, complete with soliloquies, murder, and a eunuch. In addition, it was pretty hilarious. 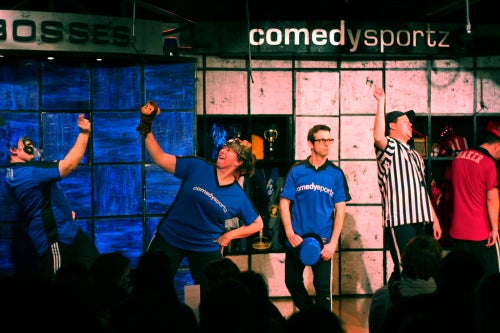 The only note in my notebook from this night reads: "NEED MORE HATZ!"

As a final treat, we saw a competitive improv show at Comedysportz. The show wasn't great, although it was funny and well-structured, and a few of our group spent the second half in the lobby chatting with some members of Octavarius we had met earlier in the week. The show let out and we all found each other, and having had the foresight to order at intermission, we walked a block or so to Giordano's for couple more deep-dish pizzas for our last late night together in Chicago. We gave up seeing the "Nightcap" show at Comedysportz in favor of pizza, conversation, and more time in our host's indoor hot tub until the garbage trucks were out. 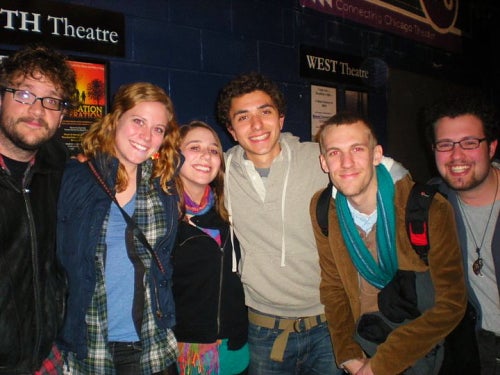 Octavarius will be here next week for improv conference! I'm so sad that I'm going to miss that, even though I saw them when they performed here a few years ago.

I swear Pitts turned that Second City classroom into a freakin' monastery.

Great write-up, Joe. Something to show to the grandkids one day...