Like many other students, I didn't know exactly what I wanted to study before coming to college. In high school, I was fascinated by my science courses, particularly biology, and my volunteer activities in high school, which I continued at Oberlin, convinced me that I wanted to pursue a career in which I could help others. For these reasons, among others, medical school was on my mind before coming here, but my choice to pursue it certainly wasn't set in stone.

But when I arrived at Oberlin a bright-eyed first-year, with so many courses of study before me, countless options whirled around in my head--English, journalism, neuroscience, math, economics, and of course, biology. As you may have guessed, my interest in so many different subjects is one of the reasons I was drawn to a liberal arts college in the first place.

To pare down this long list of potential majors, I took a wide breadth of classes, my first semester, studying Greek tragedy, gender and race in literature, introductory economics, and chemistry. As the semester progressed, I became increasingly interested in my chem course, and the idea of a pre-med track became more and more appealing.

At the same time, while my interest in the sciences grew, I found myself drawn to my economics course as well. The discipline's reductionist approach to problem solving appealed to my methodical brain, and I loved that nearly every economic model we learned in the classroom helped explain some aspect of human behavior that was simultaneously intuitive and fascinating.

So, as the semester came to a close, I continued to feel a pull in both directions; though pre-med still seemed like a viable option, I started to seriously think about becoming an econ major. Then, when registering for spring semester classes came around, I decided to drop my spot in Chem 102, adding Urban Economics in its place--a decision that, to me, signified my abandonment of the pre-med track in favor of pursuing an econ major instead.

Now, this may seem like a rash decision--and though many hours were spent on Presto (the course registration website) perusing the course catalog and sifting through my options with my advisor, it probably was. Still, it wasn't quite as rash as it may seem--and at the time it felt like the right decision. Here are some reasons why I made this choice:

Fast forward to my sophomore year winter term. I was fortunate enough to participate in the
Oberlin Business Scholars Program, where I, along with ten other students, received an inside glimpse into some of the world's most prominent firms in a variety of business fields including finance, nonprofits, private equity, corporate law, advertising, tech, and consulting. Though I entered the program with little idea of where my Econ degree could take me, I left an aspiring consultant. 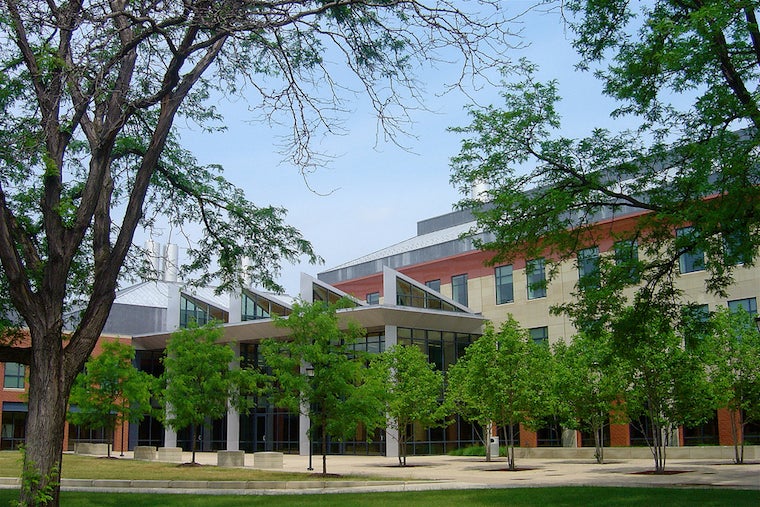 The Science Center, aka where I now spend most of my time.

I knew from the moment I visited McKinsey and Company that consulting was the area of business that most appealed to me; I love problem-solving, and consulting would allow me to use my "expertise" in economics and math to formulate solutions to my clients' problems.

To get my foot in the door of the business world, I opted to work in mortgage finance for the summer at one of the firms that I had visited with Business Scholars. Though it was not a consulting company per se, I liked the firm's tight-knit and collaborative atmosphere, and figured it would give me the best glimpse into the field that I could get at that stage in my undergrad career. Throughout the summer, I observed and helped MIAC employees advise their clients--mostly big investment banks--on how to protect their mortgage portfolios from risk and maximize their returns (and helped on a slew of other projects as well).

But at some point during the summer, something finally clicked: I disliked the fact that the client I was helping was a faceless company. I felt no real sense of satisfaction in helping billionaire companies make more millions, and I frankly don't care enough about money to spend my career helping businesses make more of it. I wanted to help people solve their problems, not corporations.

In questioning the path I was on, I confronted the fact that I was not sufficiently drawn to business to pursue it as a career. High on the experience of Business Scholars, I changed my homepage to the New York Times Business section, figuring that it would help me develop a genuine interest in business by repeat exposure. But more often than not I clicked away and navigated to the Health or Science sections of the website as soon as the webpage loaded.

As I began to realize that business was not the right path for me, I inevitably returned to thinking about medicine. After thinking it through for countless hours, and speaking extensively with my family and friends in the medical field, the appeal of a career in medicine--the opportunity to help alleviate suffering coupled with face-to-face, human interactions and complex problem-solving--was irresistible. And of course, it would allow me to return to studying science--something I greatly missed. So, I decided to get back on the pre-med track as a third-year.

Though starting pre-med requirements from square one as a junior may seem intimidating, especially when I have to simultaneously finish up my Econ major and Gender Studies minor, it's really not as scary as it sounds! In fact, it's been going pretty smoothly ever since I devised with Oberlin's pre-med advisor how and when I'm going to fulfill the myriad application requirements for med school. I'll try to write a post in the near future about what doing all this looks like as a junior.