Whereas some of my friends figured out their majors relatively early and have been making connections in their chosen departments since their first semester, I hadn't taken more than one class in any department after my first year and didn't discover my major until my third. I'm not part of any stabilizing co-op community and although I've had the same two jobs for every semester I've been here, both blogging and lifeguarding are solitary activities by nature. I've floated in and out of a few student organizations without making them a huge part of my life and lived in two different dorms over my two years here. As a result, the most stable community in my Oberlin life has been my beloved a cappella group, Nothing But Treble.

It only felt right to post videos of some of my favorite Trebs arrangements. This one from our Winter Concert is "For Emma," originally by Bon Iver and arranged by Nona.

Nothing But Treble is Oberlin's oldest all-female a cappella group (the Obertones hold the honor of being the oldest group all-around). Frankly, our origin story is embarrassing. In brief, some Oberlin ladies were into some mid-80s Obertones and started singing a cappella in an effort to catch their attention. But that was in 1985, we current Trebs1 are focused on using our voices to make awesome music rather than to make guys like us.

"That Wasn't Me" by Brandi Carlisle arranged by and featuring Sam, performed at our Winter Concert.

At the moment, there are 12 beautiful Treblings contributing to that awesome music. We share a common interest in singing, but we've chosen to specialize in disciplines from politics to dance, math to piano performance, archaeological studies to creative writing. Something I think is special about Trebs in particular among student groups is that we're all involved in very different things outside of the group. I can confidently say that if I didn't do Trebs, I wouldn't have met the majority of the people in the group and that my Oberlin experience has been richer because I met them. But before I get too sappy, it should also be noted that this diversity of perspectives also manifests itself in our repertoire. Like most college a cappella groups, we sing pop songs, but we also perform soul, folk, rock, hip-hop, rap, jazz, and most recently Disney music. (Disney is a genre. Don't question it.)

A very blurry video of us singing "Sweet Child o' Mine" by Guns N' Roses, arranged by Nona and featuring Eliana at our Parents Weekend concert.

In addition to singing, we also have a ton of fun together in and out of rehearsals. Conventional wisdom says that when large groups of women come together, they always end up getting catty, but that hasn't been my experience in Trebs. Sure, rehearsals occasionally get a bit tense (after all, we usually rehearse after 10 PM), but most of the time we're much more likely to get distracted by silliness than by an argument. We try to stay on-task during rehearsals, but we've been known to descend into hand-standing, chalk-drawing, break-dancing madness. A Trebs secret: when we're getting too silly, our version of the classic "end of recess clap" is to have someone sing "What do we want?" at the top of their lungs and have everyone else answer with "a girl worth fighting for!"2

"Son of A Preacher Man" arranged by and featuring Nona at our Winter Concert.

But I don't mind that we occasionally lose our focus. In fact, I love that in addition to being members of the same a cappella group, we Trebs are friends, people who support each other academically, personally, and as artists. As a nearly-lifelong "choir geek," I've made many of my most meaningful friendships through singing groups. Some of my best friends from back home are people that I met through my high school's choirs, and I suspect that when I look back on my time at Oberlin, I will be able to say the same about friends from Trebs. Certainly now that I'm faced with a long stretch of time away from Oberlin (more on that in my next post), I'm dreading so many months away from Nothing But Treble. While I'm away, I'll just have to comfort myself with the knowledge that Trebs will be there when I get back, watch lots and lots of old Trebs videos, and (if all goes according to plan) listen to the CD that we're recording over commencement week.

There are more videos from our Parents Weekend and winter concerts as well as some photos on our official Tumblr as well as some slightly older videos on our Facebook page.3 Plus, if you're reading this on the day I publish (May 6) our final concert is being livestreamed here at 9 PM. 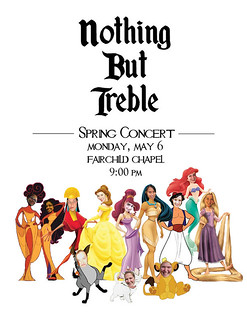 The Trebs looking Disney-rific in our spring concert poster, designed by the lovely Justine.

1Trebs, noun \trebz\
1. An affectionate moniker for an all-female a cappella group at Oberlin, the official name of which is 'Nothing But Treble.'
2. Multiple members of the same.

2 On the off-chance you haven't seen Mulan, here you go. Actually, you should probably watch "A Girl Worth Fighting For" even if you have seen Mulan. I'll wait.

3 Need incentive to check out our Facebook page? Nothing But Treble is (as far as I know) the only a cappella group with an original song, composed by alumna Maya. The only current recordings of it are Facebook videos (hopefully this will change very soon) and it's freaking amazing so you need to get yourself over to our page to give it a listen.

I'm gonna publicly state it here but YOU ALL HAVE TO RECORD CONSIDERING YOU. Have to. It is so so so so sooooooooo good. Also I need to be able to listen to it on repeat for years and years to come.

Also: here's the archive of last night's concert, for those of us reading this entry after May 6th, 2013.

Loved reading this! Brings back memories, I was a treb 1991-1995 and sing in a group started by another Treb. Check out Solstice's website: www.solsticesings.com.