I'm writing this from the porch of my housemate Sonya's home on the Tiberon Peninsula overlooking the San Francisco Bay. The Golden Gate Bridge is just to my left in the skyline, easily visible on a fog-free afternoon. I've spent the last three weeks in California traveling down the coast and then back up again. Suffice it to say, this has been the most incredible Winter Term.

My project has been creating a chapbook of poetry. It's pretty personal and I'm not quite ready to speak its name out into the wider world, but I'll vaguely say that it has been one of the most challenging and beautiful quests I've put myself on in college. I definitely do not consider myself to be a poet, and I'm still not yet sure what I have to give this art form, but it has been such a helpful way to work through things and learn what my own words can do and make me feel. 2016 is all about reclaiming what is my own as mine, and this book of poetry has been a great beginning to that.

Since I won't be sharing my poetry with this blog, I want to tell you instead about the physical journey I've been during this month. Here's a messy Google Maps scribble of everywhere I went! 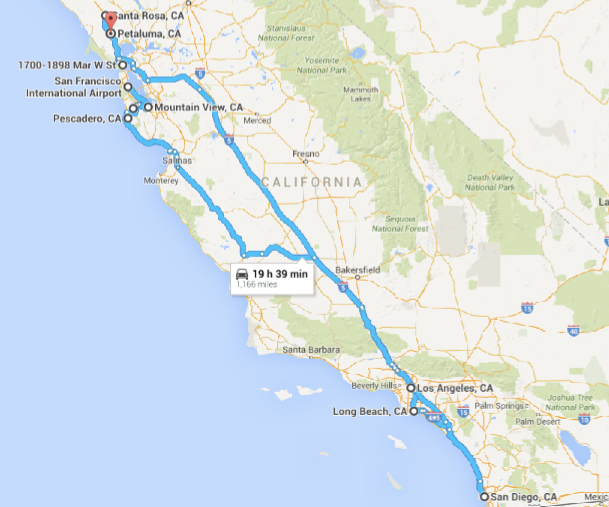 This has been my first trip to California. I landed in San Francisco at the beginning of the term and Rewa picked me up from the airport and drove me to her parents' apartment in Mountain View. Her apartment was very cute and cozy. Her family lives in a spiritual community that felt very peaceful and welcoming. This is also the first time I've been exposed to New Ageism, of which there has been a lot.

Rewa spent her Winter Term working at the Djerassi Resident Artists Program, which is this incredible organization atop the Santa Cruz Mountains where artists come together for a month to collaborate and create. It is hard to describe in words but it is beautiful and profound. The Executive Director was on vacation and was kind enough to let us stay in her home for a few nights and that was just the most stupendous start to Winter Term.
I woke up each day surrounded by a stunning view of tress, I took hikes in the valleys and through the Redwoods, and we ate excellent food and slept with the director's pet cats. On top of all that, since Djerassi is full of artists, many of them leave works behind on the property so the woods and fields are filled with standing and decaying pieces.

I think being in the woods surrounding by all this impressive and awe-inspiring art awoke this part of me that has been sleeping for a long time. I was able to get up early in the mornings, breathe deeply, and be really grateful for where I was. 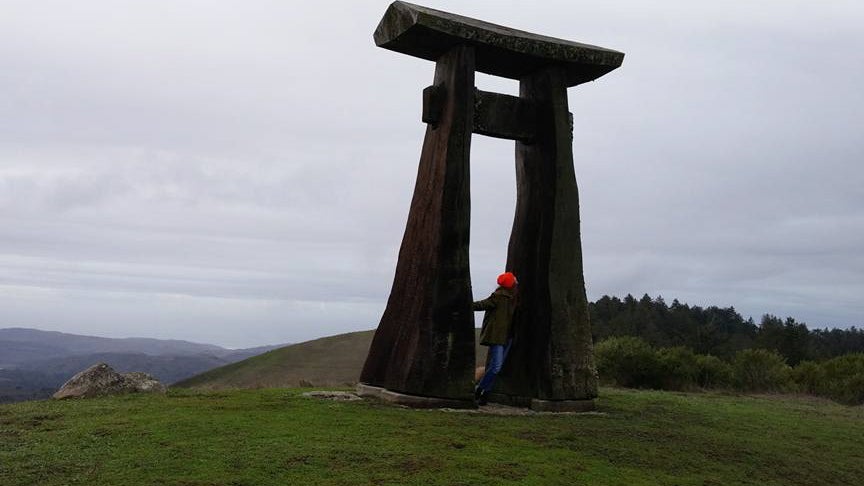 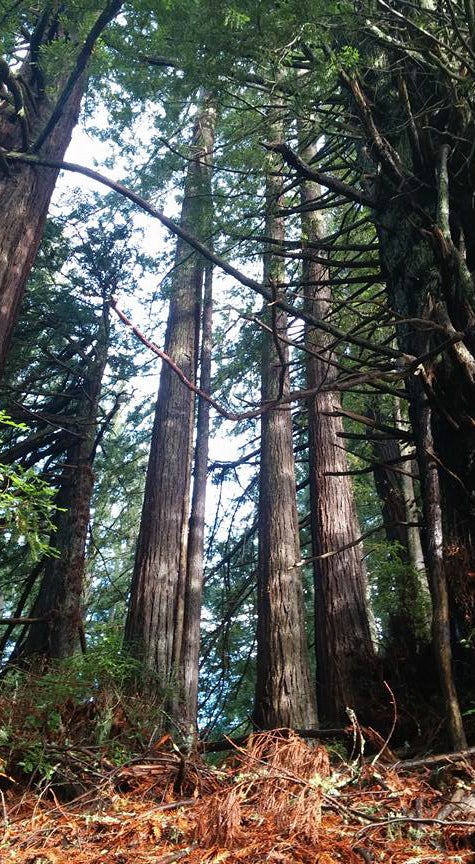 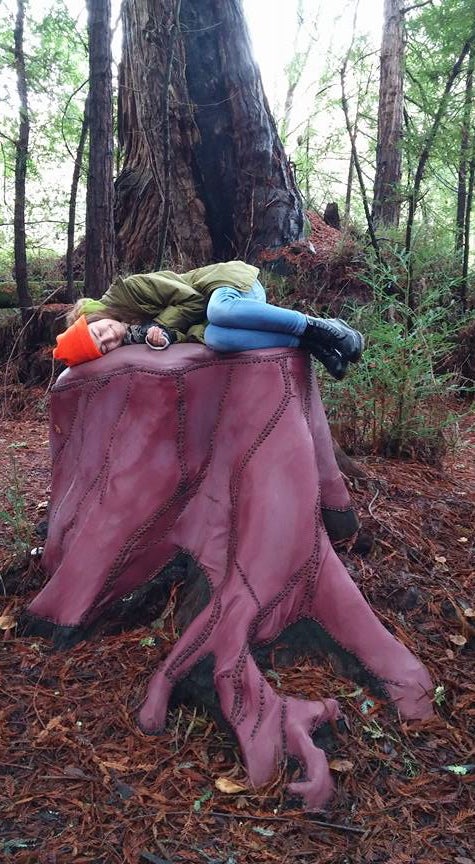 Pictures: Me standing under "Torii" by Bruce Johnson, the Redwoods, me sitting atop "Roots to Crown" by Alissa Neglia

I bought a California Rail Pass from Amtrak and so, a week after I first landed, Rewa dropped me off at the San Jose train station and I took the Coast Starlight to Los Angeles. I love traveling by train. There is something old-timey and wonderful about it. Plus you get to move freely about. On this particular train, there was a viewing car that was entirely windows you could watch the ocean from. The train ended its journey at LA's Union Station.

In LA I stayed in two different places--for the first few nights in Northridge with my friend Anders' parents (while Anders' spent their Winter Term in Amsterdam), and for my last night in a studio apartment in Koreatown with a friend of my mom's friend. My only gripe about LA is that the public transit is truly awful and I spent way too much money on Ubers. While in LA, I saw the Hollywood sign, walked Hollywood Boulevard, ate at Mel's Drive-In Diner, went to the Santa Monica boardwalk and pier, and traced the footsteps of Rockets from my favorite novel What We Do is Secret. This last thing was the most important thing I did with my time here and fulfilled a longtime dream of mine. What We Do is Secret is the story of a young gay sex-worker, Rockets, who is immersed in the 1980s LA Punk Scene and the plot follows him over the course of his thirteenth birthday, to spots from Darby Crash's grave to Oki Dog, a famous hangout of punk rockers back in the day. When I stood in front of Oki Dog, I broke down in full sobs.

LA Highlights: seeing orange and lemon trees for the first time, the day that it was 75° outside, the Getty Museum. 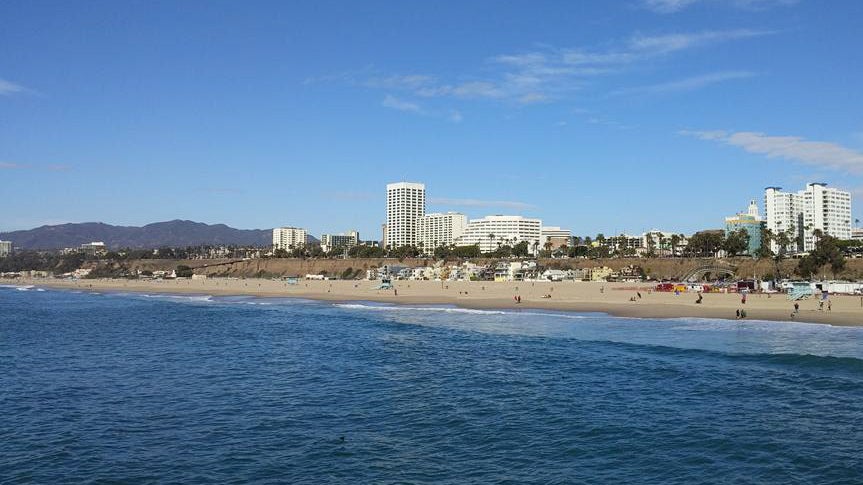 From Union Station I took the Blue line on the subway to Long Beach. Even though it's super close and connected to the city by this line, my hosts assured me Long Beach is its own place, not LA. I was staying here with my godmother's sister Kelly and her wife Molly. Their house felt exactly like being in my godmother's house and it was so soothing and rejuvenating. I went to the yoga class Kelly teaches, we visited their spiritual temple, and I ate an orange straight off a tree in their backyard. We talked about coming out and moving from the Midwest to the gay-friendlier coasts in the 1980s. I processed some break-up stuff with them, and got a lot of saged queer elder wisdom. I was only there for 24 hours but it was powerful time.

Long Beach Highlights: discovering I can still do Down Dog, drinking so much tea, and just being able to talk to Kelly and Molly.

Kelly and Molly dropped me off at the train station and gave me big hugs goodbye and then I took off to San Diego. Here I stayed for two nights at the International Travelers House Adventurers Hostel. I knew about this place because my friend and fellow Obie Leila worked here over the summer and highly recommended it. It's in Hillcrest which is the gaybourhood (I learned that from my Uber driver who referred to it as the "homosexual area" and told me not to go out here in case one of them touched me #microagressions) and also was close to Balboa Park. When in San Diego I spent an entire afternoon wandering the park, I visited La Jolla to see the seals, and I even experienced a whale sighting! I saw it use its blowhole three times and the briefest flip of a tail! I also went to Oceanside to go thrift shopping and put my feet in the ocean. I impressed myself by being actually social in the hostel, and my room was Mermaid themed so it was perfect. San Diego is marked in my mind where I rode in the backs of buses reading Sandra Cisneros. 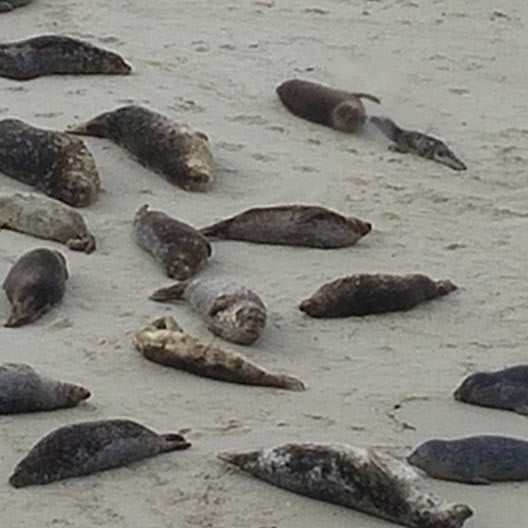 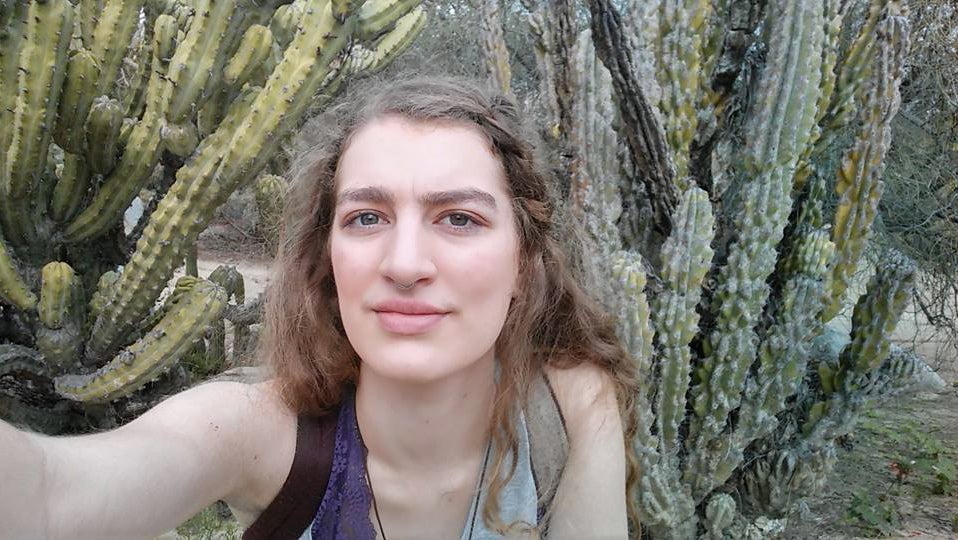 Pictures: The seals at La Jolla, a selfie with some of the cacti in Balboa Park.

I spent 17 hours total on two Amtrak trains and a bus on a ridiculous travel saga that I recapped on Twitter, all the way back to San Francisco. My last stop was staying with Sonya, who lives on the Tiberon peninsula. Here I've laid my wanderlusting heart down to bed, where I've sprawled out and binge-watched some Netflix. With her I've also done day trips to Santa Rosa, Petaluma, and Oakland.

I didn't spend that much time in San Francisco itself, but I did get to the city to explore the Mission, Castro, and Chinatown. I have never seen so many pride flags in my life as I did in the Castro. The GLBT museum housed there had an incredible exhibit on Asian Pacific Islander Queer Identity entitled "The Dragon Fruit Project."

Tiberon Highlights: hiking near Sonya's house, the views of the Bay from the porch, the Russian River Brewery in Santa Rosa, learning about the Artemis Café, and the Arizmendi Cooperative Bakery in Oakland. 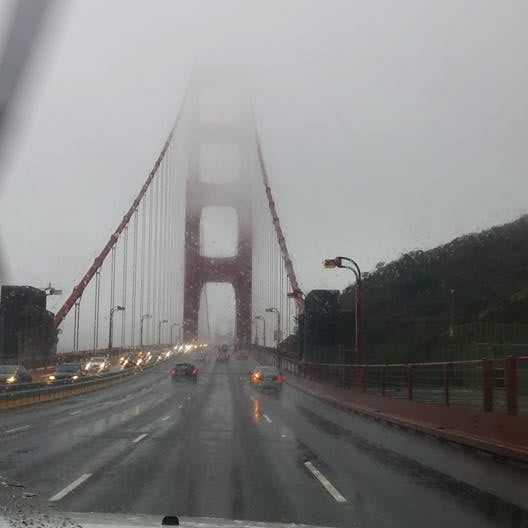 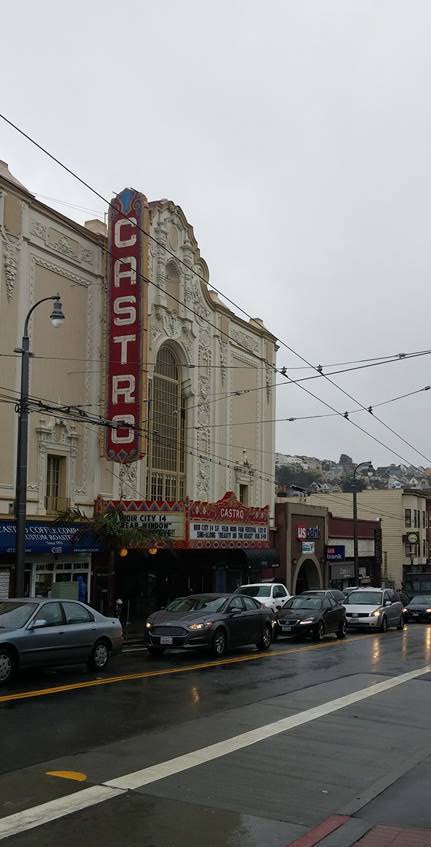 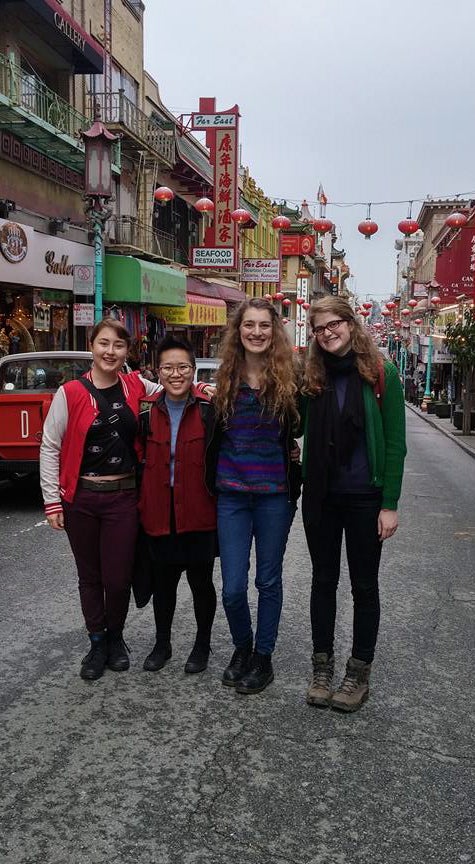 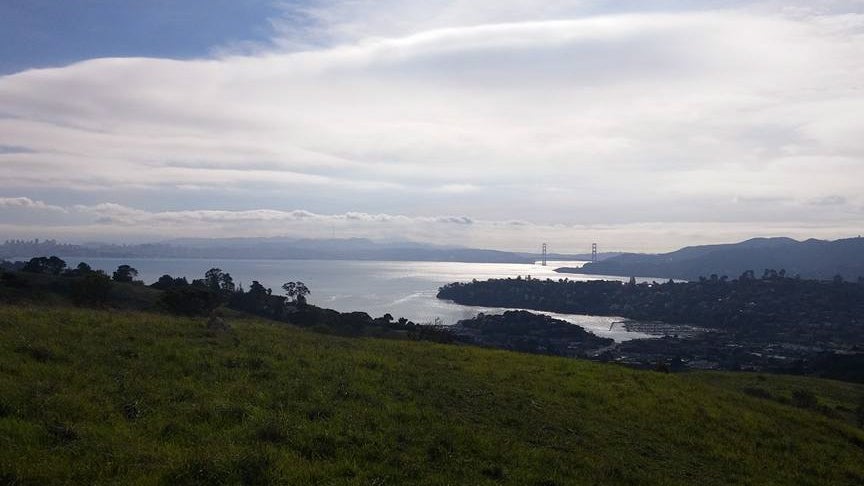 Pictures: Driving over the Golden Gate Bridge on a foggy morning, Castro Theater, me and friends in Chinatown, the view of the Bay from my hike in Tiberon.

This month has been about sunshine, the ocean, and deep breathing for me. I feel well-rested and ready as I'll ever be to be a student again. I got to see incredible things and travel down and up the coast of California staying with the kindest and most generous people. I love solo travel--it taps into deep crevices of myself that I usually don't get to spend enough time with. It also allows me to be highly self-aware and reflective and pushes me to do self-work. I have successfully implemented meditation and journaling into my practice this past month and I hope to continue that into the semester. I am also hoping to become a master meal prepper as a means to make my life way easier and ensure that I actually eat three meals a day. If you have any advice on Tupperware selection, menu writing in advance, and how to not get bored of rice and veggies all the time, please send tips my way via the comments.

And while I'm soliciting advice from you all--I just ordered fancy linen resume paper online to print my poetry chapbook on--which I'm really excited about--but I've never made a book before so I don't really know what I'm doing. I would kindly appreciate advice on bookbinding.

So that's been California and my month! Thank you for reading about what I've been doing and tell me all about your Winter Term in the comments! Lastly, don't forget to post and checkout the #OberlinWT tag on Instagram.