Oberlin is about originality. It's about going beyond what your predecessors have done, and about redefining limits. This winter term, I've redefined some limits of my own.

Ironically, many before me have had the same winter term project. I am currently in Seattle at SANCA, the School of Acrobatics and New Circus Arts. Today is the last day of our two-week acrobatics intensive, and tomorrow begins our two-week aerials intensive. To avoid repetitiveness, please read my friend Ida's blog post about SANCA from when she came here last year. 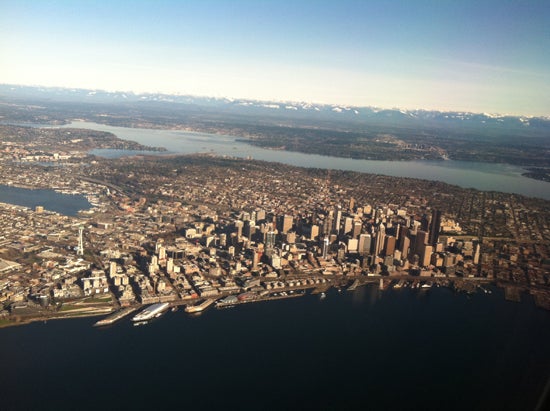 An aerial view of Seattle from my plane ride in. It has been curiously sunny the entire time I've been here.

Most of the participants in the acrobatics intensive are around the same height and weight. This makes partner acrobatics rather difficult, as it is typically much easier if the base (aka the person on the bottom) is significantly bigger than the flyer (aka the person on the top). Although this unfortunate lack of variation in SANCA participants has made flying/basing more difficult, it definitely hasn't made it impossible. We have been forced to get creative, and to challenge what we thought were our physical limitations in a way we didn't expect.

Conversely, I personally have had a very different experience for the past week or so in terms of defining my own limitations. I am notoriously skilled at injuring myself, and SANCA has been no exception. I somehow managed to throw out my back sometime last week and have been more or less completely debilitated since then. It hurts even to walk, so acrobatics has been totally out of the question.

At first, I was pretty annoyed at the prospect of being unable to participate in my own winter term project. As per usual, I tried to pretend that my injury wasn't that big a deal and carried on with the group for a few days. Not surprisingly, things only started feeling worse. I knew I had to stop.

As difficult as it is to push one's own personal boundaries and limitations, I think it is just as difficult, if not even more of a challenge, to know when you've hit your limit and give it a rest. In this crazy, fast-paced modern world we live in, recovery and healing tend to be undervalued, and pushing through the pain tends to be overemphasized and rewarded.

I was at first bummed to be sitting out of everything, but, as most things go, it has kind of grown on me. For one thing, I've gotten a lot of reading done. I've also had the time to really get in tune with my body and myself (funny that there is a definite distinction between these two things). Most people, myself included, never take the time to slow down and realize just how interwoven all the different parts of our bodies are until one of them starts to hurt, and then everything starts to hurt, even things you never thought you used that muscle for.

I'm grateful for the mini-break that this injury has allowed me. Hopefully I'll be feeling up to par soon, but until then, I'm happy to give my body the attention it needs. As Ida said in another of her posts about SANCA, sound mind, sound body. It's all any of us can try for. 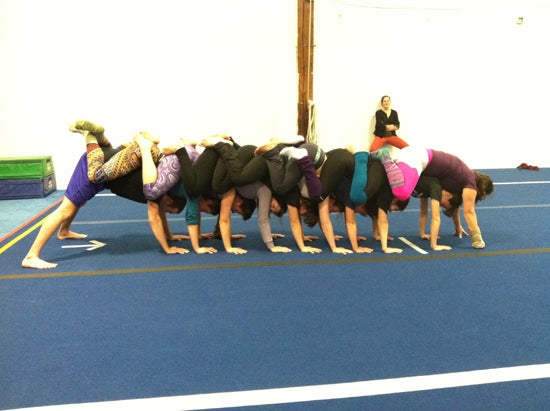 My fellow classmates being a giant caterpillar.

I LOVE SANCA SO MUCH. If Nick Lowery is still there, tell him I miss the heck out of that Chinese pole.

While I'm terribly sad that you're not able to fully participate in the SANCA experience (say hey to my pals Liz and Erica and all those other fine Obie alums!!), figuring out what's best for your body is ridiculously important. One of my friends/former housemates (he was one of the folks in the first SANCA winter term class!) and I spent a ton of time my senior year trying to figure out body signals and how to respond to them. He's now in physical therapy school, helping others figure out the same.

Also, are you *sure* that's Seattle? There aren't enough clouds...