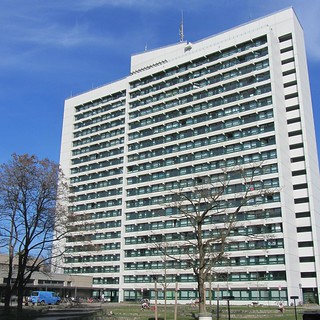 One of my favorite things about my student housing in Munich is that it's just across the street from the U-Bahn stop Studentenstadt. My housing isn't centrally located - I live in a northern neighborhood called Freimann that you won't find on any tourist maps - but because I have access to the U-Bahn I can get most places relatively quickly, whether it's to my classes in Schwabing, my favorite museums and study abroad program headquarters in Maxvorstadt, or the tourist attractions in the Altstadt. If you're a city-dweller that might not sound too extraordinary, but for a lifelong suburbanite public transportation is a revelation. One of the few Munich U-Bahn maps I've found that actually shows the relative distances between the stops. As you can see, the stops are fewer and farther between in the northern section of the city, but I'm still not too far out from the city center. Image found here.

Aside from the convenience, there are a lot of things I love about the Munich U-Bahn. In typical German fashion it's clean, reliable, and nearly always runs on time. As an added bonus, a lot of the MVG employees who call out the stop names have great Bavarian accents that transform lines like, "Nächste Halt, Alte Heide" (next stop Alte Heide) into something more like "Nächste Hoalt, Oalte Heidee." However there is an obvious downside to taking the U-Bahn everywhere - when I travel underground, I miss out on a lot of what's going on in the city. 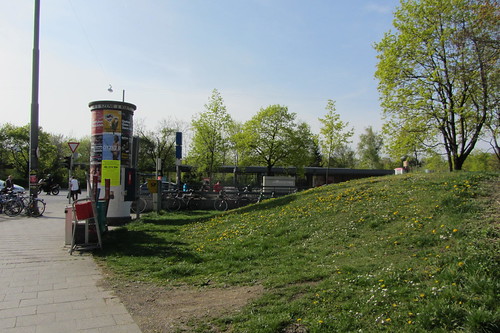 The (mostly concealed) entrance to the Studentenstadt U-Bahn station

That's part of why I decided not to buy another U-Bahn semester ticket and have instead devoted myself to biking. I haven't been biking around the city for too long, last semester's ticket only expired on March 31st, but I've already started seeing the city differently (and sweating a lot more). 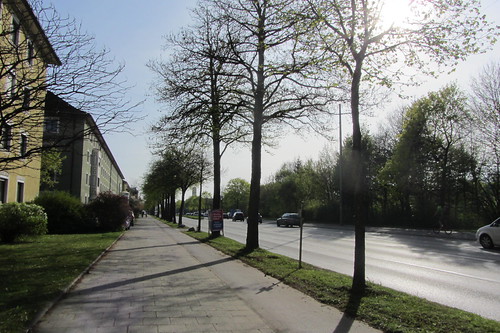 My main bike destinations are the JYM office and the LMU building that houses the German, English, and Comparative Literature faculties, which are 6.2 and 4.8 kilometers away from my apartment, respectively. That's a far cry from how far I have to travel to get to class in Oberlin (a distance not even worth measuring in kilometers)! Neither place is particularly difficult to get to and funnily enough, it takes just as long to get to them by U-Bahn as it does by bike. After just a few weeks of biking, I already have a much better sense of northern Munich's geography (I've only gotten lost once!) and a better feel for the area generally. The number of cool used bookstores, restaurants, and interesting bits of architecture that I pass every day is astounding - just today I noticed a piece of street art that I'd never seen before and ducked into a bookstore to find a cheap copy of The House of Mirth (for a class) on my way home from the JYM office. 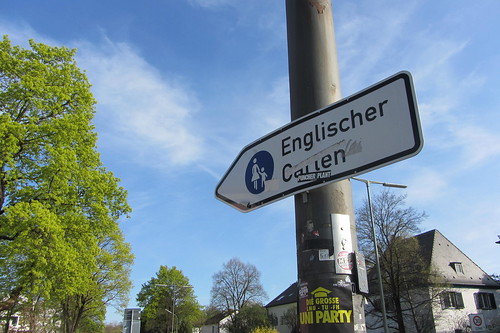 But as much as I like Schwabing, my favorite place to bike is the English Garden, an urban park (much larger than Central Park in New York) located just behind my student housing. It's famous for its constructed rapids, which allow for year-long surfing on the Isar, and the Chinese Pagoda, but mostly it's just full of dog-walkers, joggers, families with kids, groups of students, nude sunbathers, and the occasional street musician - not to mention me, riding around on my bike until I find a nice spot to enjoy a book and a snack. 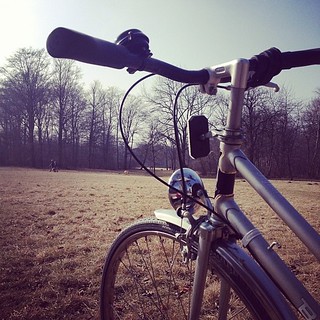 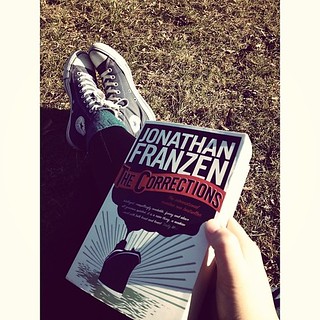 Because Oberlin is so small, it's very easy to get to know the area - to memorize the street names, the order of the shops, even which tree grows in which corner of Tappan Square - without even trying. Munich isn't that way at all, but with my bike, I'm hoping that I can make Munich feel a bit more like Oberlin, which is to say a bit smaller and a bit more like home. 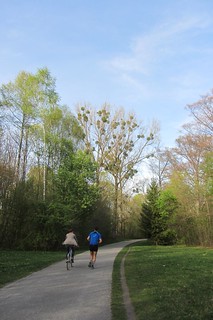 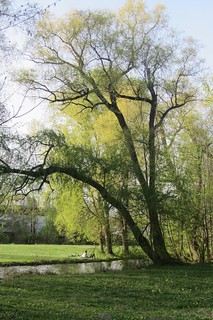 Wow, I didn't realize that you were biking for real for real this semester! I initially thought you were bike riding for fun, but with purpose, that's a lot more exciting. Are there bike-specific lanes in Munich? It's something I've seen more of in European urban planning than in the US, and I like that.

Also, I'm jealous of how greeeeeen everything is. Spring is barely here, and I'm still looking forward to real lawn + book time.

HOW DID I MISS THIS WHEN YOU POSTED IT.

I really like this! This is really cute! Bikeability is a thing I really miss about Europe, so you just gave me some childhood feelings. (In my teeny town, it was easier to get around by bike than by car, because there was a section of park/woods/playground-type stuff in the middle with bike paths.) Also nude sunbathing. Why not me.